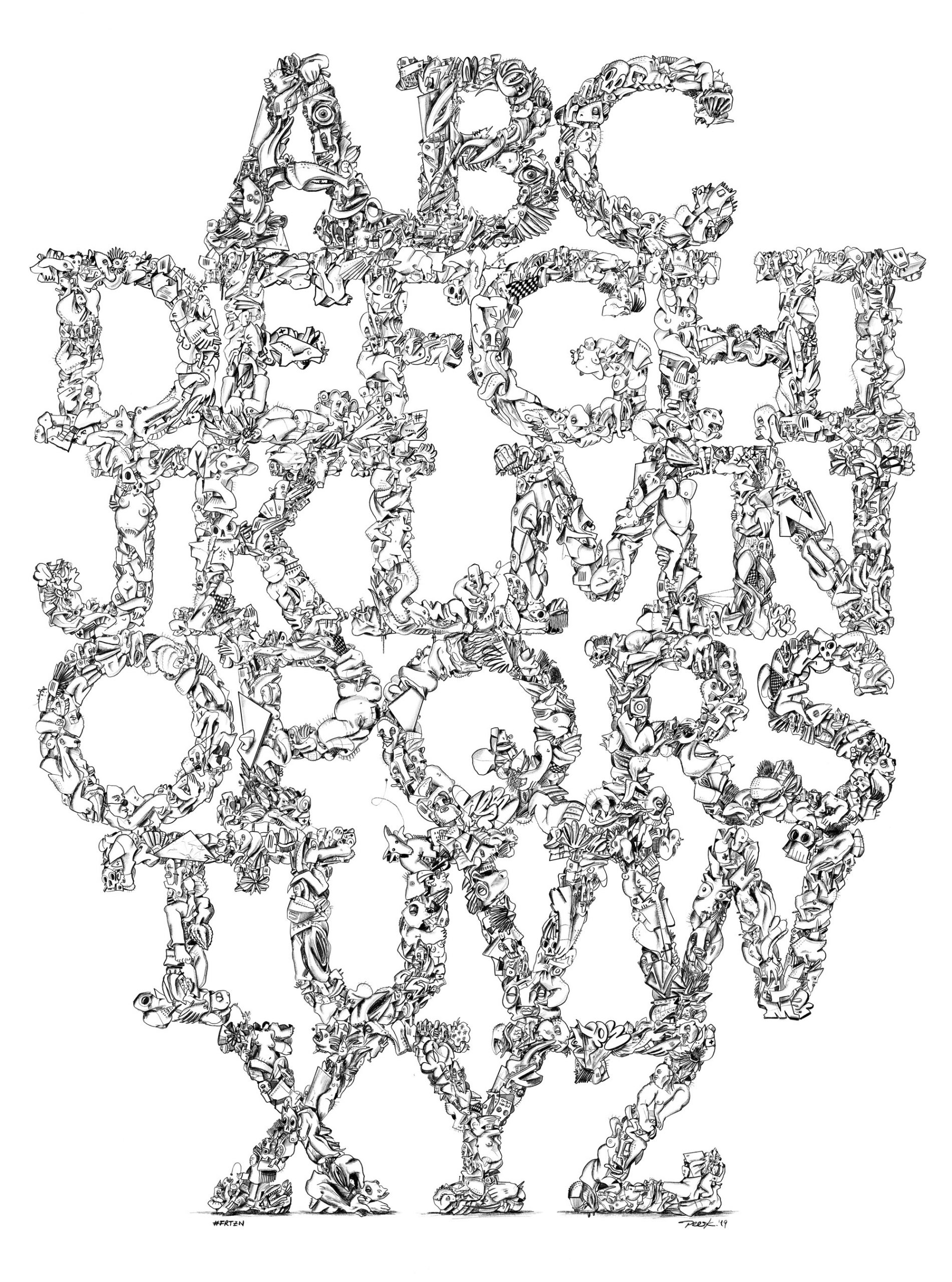 In a playful and experimental way, Kriesel immerses the viewer in “Das FRTZN Alphabet” in a fairy-tale, almost fabulous world. At the same time, he confronts him with the absurd real world of data flow, stimulus, and information overload—a world full of violence and frustration, but also absurdities and humorous weirdness.
In his pictures the viewer can lose himself and often look at a multitude of different sceneries. These “hidden object pictures” cannot be deciphered at first glance—so the viewer can discover new themes and things again and again. With this visual excess, Peer Kriesel translates today’s flood of images, videos, expressions of opinion, and information that is created via television and, above all, the Internet. As in his “grimace carpets,” one work often simultaneously creates extremely gloomy worlds, but also witty absurd situations.

This clash, which Kriesel observes in real life and which influences him in his works, he himself calls defective (“defectivism”).
In the surreal representation of his grimaces, Kriesel wants to confront the defective and distorted state of the world.
Cranky figures, fearful facial expressions and destroyed existences, but also funny-looking, ridiculous caricatures are brought to the paper or canvas with a fine stroke and yet gestural painting style. “But these grimaces are also the grimaces you encounter on Facebook, Instagram, Tumblr and the other ‘communities’ as well as on TV. They grin at you from everywhere, whether it’s Big Brother, one of the many casting shows, or the jungle camp.”

In the merging grimaces, which Kriesel calls “grimace carpets,” these different grotesque grimaces become one. In the process, a grimace can appear deeply unhappy and at the same time, for example, laugh wickedly. According to the artist, this also reflects our society, which on the one hand functions “well”—offers good entertainment—and on the other hand creates suffering.
Peer Kriesel shows his state of shock about this crazy world and his inner struggle for its acceptance by almost restlessly painting, drawing or blotting his grimaces. He is in search of the perfect, perfect grimace, which—according to the artist—embodies “the total emotion, the absolute power”.

“Das FRTZN Alphabet” is what happens when hope, love, anger, and happiness merge into one face.