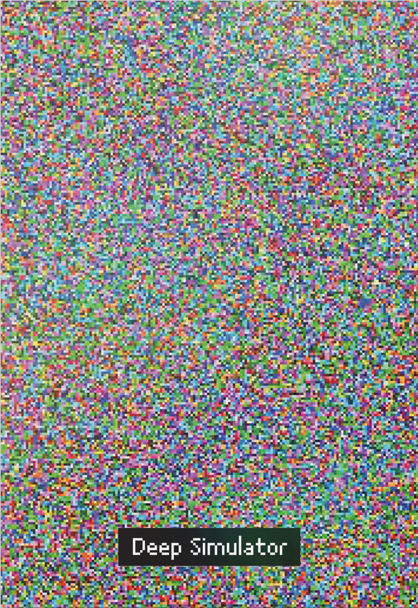 The horizon has vanished.
Nothing is certain. Places, characters, relationships.
Unexpected conversations, unidentified objects, fleeting companions, elusive clues, hidden passageways, unverifiable legends, fractures, queries, quips …
In this alternate dimension, memories and dilemmas of dreamers interweave, leading us to one question…
One of the lead characters is you – the reader.
Starting with the lead character falling into an unknown space, you are faced with options as you turn the pages. The choices you make may take you forward or send you back, but you may also end up wandering in circles in one narrative, or skipping to a section towards the end. It is even possible that you are led to situations unrelated to the book…

Deep Simulator is a cyberdrama-novel with layers of stories generated through reader interaction. Based on a namesake video game, it is a collaborative experiment between artists aaajiao and the author Ag, which began during the outbreak of Covid-19 in 2020. The novel and the video game have different focuses and nuances in their sensory workings and content, but both stem from themes related to player identity, the multiverse and the breaking down of interdimensional walls. The exposure of karmic chains, the ideological rupture between various movements, melancholia, death, the final struggle, accelerationism, the inability to distinguish between the real and the imaginary, all foreshadow an ominous sense of change looming ahead.

Like the virtual meta-game experiment that came before it, this book is hard to define. Ag blends myth, science fiction and multi-media reality into a seemingly unconventional spatio-temporal dimension. Upon opening the book, the reader becomes the player, and in the experience of reading-wandering-selecting, engages in an indeterminate journey of in-betweenness.
Deep Simulator is an organic, living, long-term project, and this publication is one of its reincarnations on its transition through the next dimensional wall – from a whimsical, pie-in-the-sky script to an outlandish indie game, then to a virtual game which was made into a physical book written in two languages with a unique design.

Comments
Perhaps only someone as spiritual as Ag can turn written word into a game full of uncertainty and metaphysical ambiguity posited within a text that eliminates the boundaries of fiction, drama and poetry in its eccentric manner … If occasionally it reminds you of Beckett, it seems to also have a sense of the threshold state of the end of an era.
—Zhao Song, writer

There is nothing more liberating than wandering through Ag’s words.
—aaajiao, artist

This is a book that can be “played”, and within, is the correlation between “the story that is told” and “how you turn its pages” —it’s a game in itself.
—Mira, designer of the book

Everyone can practice writing as a comprehensive exercise in awareness, as is also the case with reading. The book’s paper is like our bodies, and they provide the most direct interface for such an exercise. This book is quite unusual in the way it is designed, produced and meant to be read—we try to let the frame of reference lapse as we play together.
—Ag, author

About the author
Ag is a writer and filmmaker whose works include fictions, art criticism, motion pictures and boundry-breaking genres. Self-identified as a wandering dream catcher, she continues to explore the energy exchange between space and consciousness, her words beaming with refreshing metaphors and signifiers that have grown from her acute observation of daily life and multifarious influence from literature, films, science and philosophy. She lives and works in Shanghai.

Notes on design
The sleeve wrapped around this volume is a deep abyss of colorful noise generated by code, which on the surface implies the static of an interrupted TV signal, but in fact, it is a cacophony of waves captured from nature and the universe. Together with the multihued laser holographic display, it foreshadows the complex qualities of “in-betweeness”.
The paper chosen for the inner pages is Fedrigoni Arena Ivory, for its subtle, vintage feel of early computer-era print in tone and touch, albeit at a high cost. The Dinkie Bitmap font, used for the cover and interior titles, pushes the technical limits of low-resolution type. The look and feel of the paper and the font come from a turning point in the print industry’s digital transformation, showing both the limitations and possibilities of being in an intermediate state.