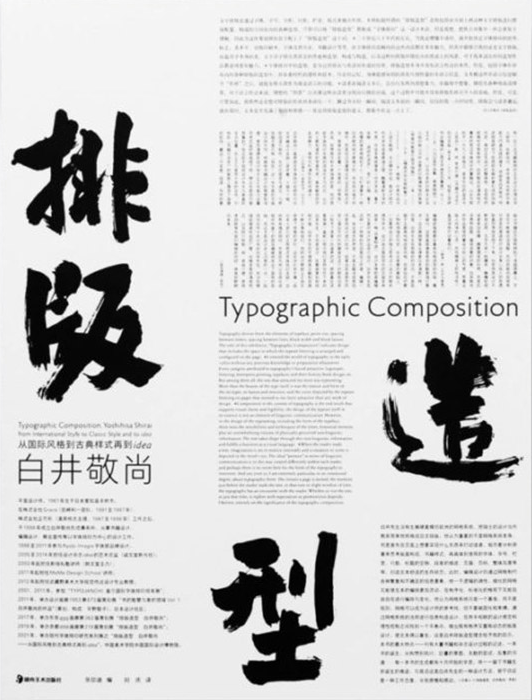 When discussing Japanese designers’ practice of typography and grid systems, Yoshihisa Shirai is a name that cannot be avoided. He is widely known for his decade of art direction at the universally acclaimed design magazine idea. He has also been involved in the design of a plethora of books.
This book is the first extensive collection of Shirai’s design and writing. It is noteworthy that the book is not a translation, but the first edition curated and designed by Chinese typographers and researchers, with Shirai’s personal participation in the production.

The 280-page book showcases over 100 pieces of work, carefully illustrated with sketches and Shirai’s recount of design ideation and execution process. Substantial pictures are intertwined with Shira’s own essays on design theories and methodologies, as well as commentaries written by other accomplished designers and design historians like Lü Jingren and Shoji Usuda.

The content is organised chronologically and by category, dividing the works and essays into four chapters – (I) Typographic Composition, early works as well as designs and essays related to typography; (II) Grid Construction, essays on the history of the grid system and his tutorial of “The Flexible Use of the Grid System”; (III) A Decade at idea, selected designs for the magazine; (IV) Book Design Craftsmanship, selected works and essays of book design.
In addition to the title of the book, which is based on the namesake Japan exhibition, the subtitle “from international style to classical style to idea” was added to reflect the different stages of Shirai's work. His typographic practice was inspired by both Japanese designers like Etsushi Kiyohara and Swiss typographers like Josef Müller-Brockmann and Helmut Schmid. But instead of rigidly imitating the European grid system, he looks at various typographic elements based on a thorough analysis of the writing itself, creating a dynamic order in information architecture.

Comments
His designs have gained high praise for idea magazine. These comments are not as colonial as “orthodox Western typographic practice by Japanese”, but that he has helped this island, left behind by the globalisation process, to utter its voice of determination and inherence, a sparkling chapter in design history. – Kiyonori Muroga, Editor-in-Chief of idea magazine

In 1998, when the Internet became accessible on cell phones, … in the midst of all the Japanese book designs that were floating around, Shirai came forward and said, “The origin of the Cartesian coordinate system, O, is here!” The vertical and horizontal axes of the coordinates are the principles of the composition of Japanese and Western languages respectively, and can be the ultimate symbol of the chronic “language of words” and the synchronic “language of sound”, i.e., the symbol of history and present. – Jun-ichiro Khori, senior editor

The most important feature of this book is the comprehensive accounts of the design process of books and magazines – from conception to execution to a huge number of sketches, and to countless attempts and repeated communication. Each book is conceived with painstaking efforts and leaves traces of its journey to birth. The methods and, moreover, the work attitude of Mr. Shirai is impressive and deeply moving. – Lü Jingren, book designer

The editor, translator and production team, with their long-time practice and research in Western and Chinese typography, have been honing the writing and design details to perfection. The book introduces readers to a high standard of visual literacy, and is a manifest pursuit of excellence in Asian book design and publishing curation. – The Type, research support for the book

Yoshihisa Shirai
Graphic designer born in 1961 in Toyohashi, Aichi Prefecture. After working at Grace (1981-1987) and Seihokei (1987-1998), he established his own design office in 1998. From 1996 to 2011, he was involved in the branding of Ryobi Imagix’s fonts. For 10 years starting in 2005, he was in charge of art direction and design of idea magazine. He specializes primarily in typography design, engaging in book design, editorial design, exhibition publicity materials, etc.