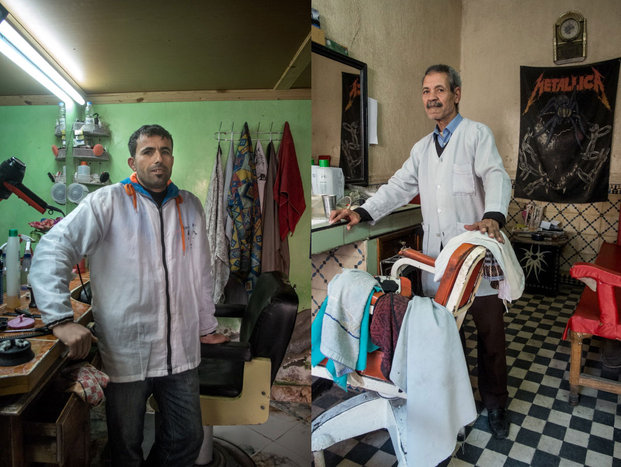 Last year in November we’ve been to Marrakech with a group of students from FH Dortmund, along with Prof. Dirk Gebhardt. On our daily walks through the Medina, we saw many barber shops and had the spontaneous idea to work on a short photo-essay. Back in Germany, some of these images were published in the Slanted special issue Slanted Marrakech.

Hicham Laurea has studied business administration. With red shirt, dark glasses and jeans clothed he stands in his salon. A wavy wallpaper with brick pattern, decorated the walls up to two-thirds of the room height. Is completed the artificial wall by a white stucco strip with black borders. Above this line is hanging a yellow clock, with sample photos of hairstyles from the 90s and two diplomas. The first
identifies the holder as a hairdresser.

The second as circumcisers. From the black compact stereo sound Koran suras. Hicham speaks as he prepares his tools for a shave. Life is hard as a hairdresser. With his studies, three languages fluently speaking and his motivation to make something out of life, he thought he was on a successful path. However, without relations or the correct name he had no chance in the job market in Marrakesh. Now he has this little salon with two chairs, a sink in a tourist-free side street of the Medina and pays 1000 Dirham Rent – he emphasizes the week. A shave costs 40 to 50 DH. For him and his family is not much left. Inshalla, Inshalla – In God‘s will. Hachmad emphasizes that we are all in God‘s hands. God will know why he has chosen this life for him, it will come better times for him.

The Medina of Marrakesh is a narrow and noisy place. Women rarely move in the narrow streets. One can see them at street dealers who sell their fruits and vegetables on plastic tarps and boxes on the roadside, or crammed on small kiosks with detergent, bread, canned food and cigarettes they stand on, buy something and disappear from the streets. The Medina is dominated by the men. There sitting in front of craft shops for tourists, squatting in workshops at the Sucks. Advertise on the road for restaurants. Many spend the day in small, dark cafes or just standing around on street corners. Men in jeans, a suit and djellaba – a tunic with pointed hood. The streetscape is masculine in Marrakesh. This dominance is also reflected in the innumerable barbers. Apparently located in every street is at least a hairdressing salon, in some two and three. The haircuts of the men are all very similar. Variances are in the millimeter range. The hair is a little longer than the worn side hair, generally all very short. The beard every three days professionally trimmed. Moroccan unit menswear, social classes independently.

The hairdressers in Marrakesh ply their craft in small, narrow mostly sparsely furnished salons. In many is just space for a sink, a chair with headrest and a dull mirror. In any salon the king looked down at hairdressers and customers. Often framed by diplomas of the local Chamber of Crafts. Some of the rooms look as if they had been previously used as a butcher shop or workshop. Others have been lovingly designed. Nadis salon is blue in blue pierced with a work surface made of light gray granite. Hamad has his salon lined with beige marble. Lamps in star shape hanging from the ceiling and the chairs were once black. Another has hung for decoration on a wall a huge Metallica cloth. It does not fit really to his appearance – he looks like an elderly, frail man. Most salons make a temporary impression they are evidence of pragmatism and improvisation. Many of hairdressers in Marrakesh are about 50 years or older. In the salons you can see only a few customers. Most of the hairdressers sit in their chairs looking out into the street and wait for better times like Hicham. 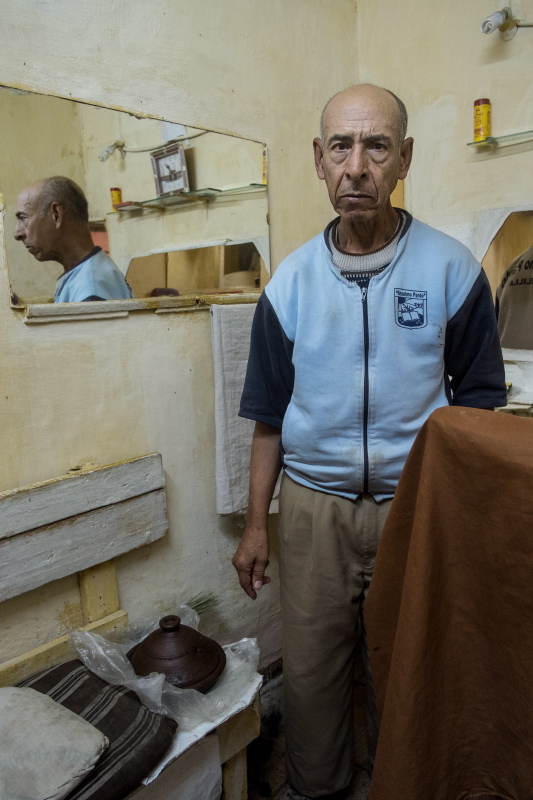 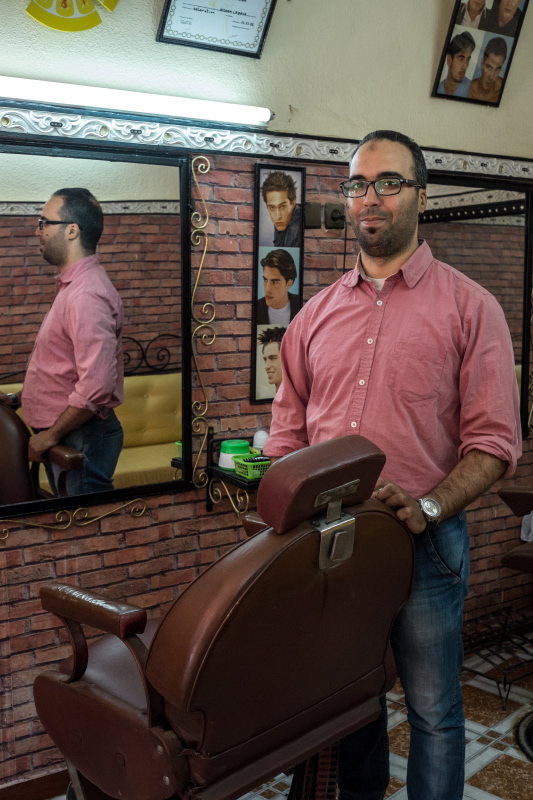 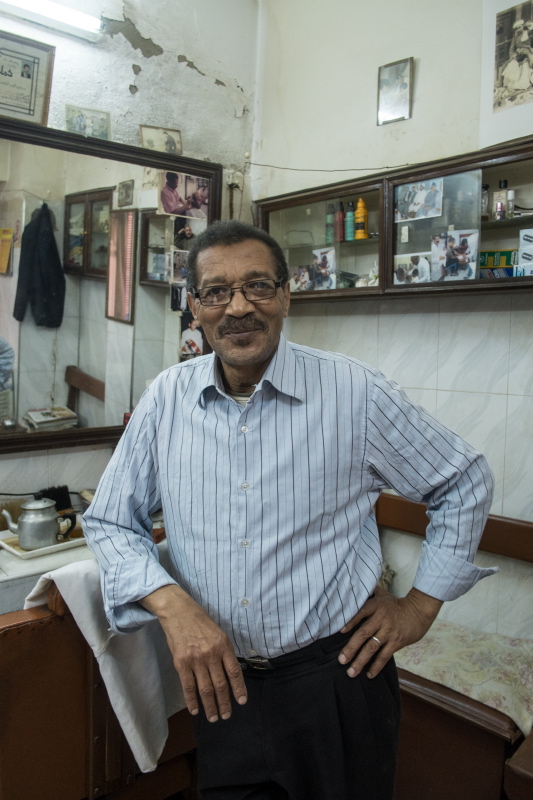 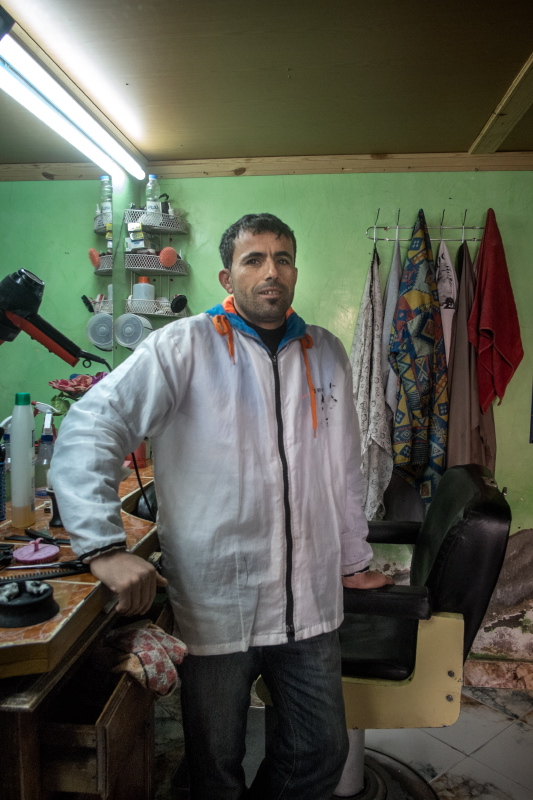 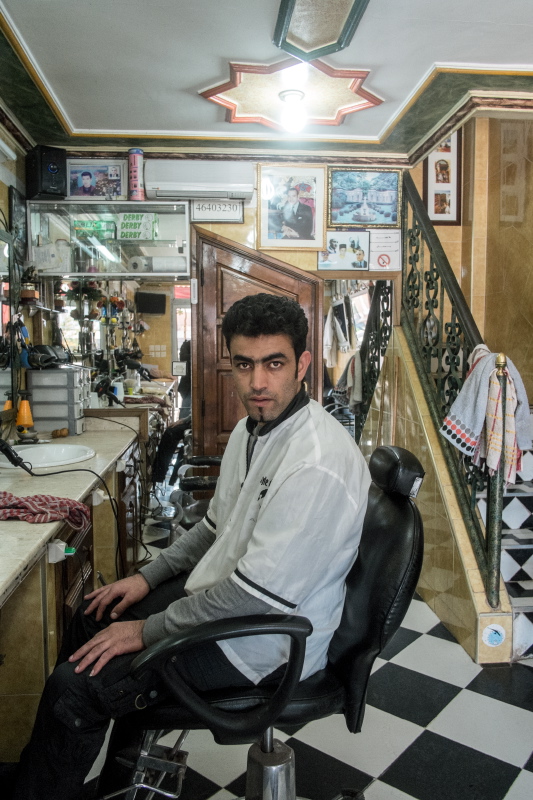 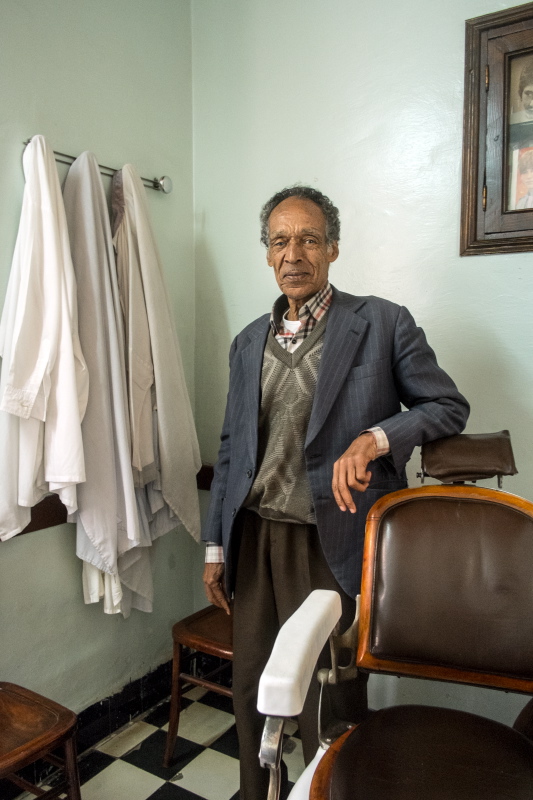 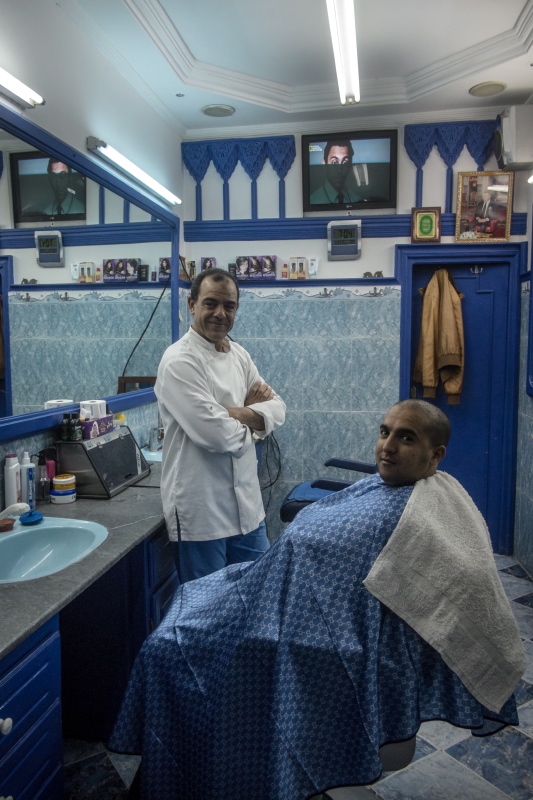 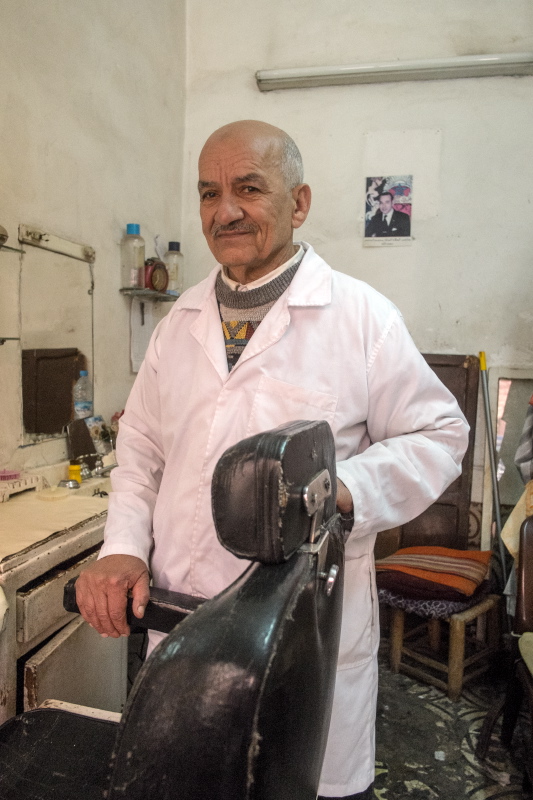 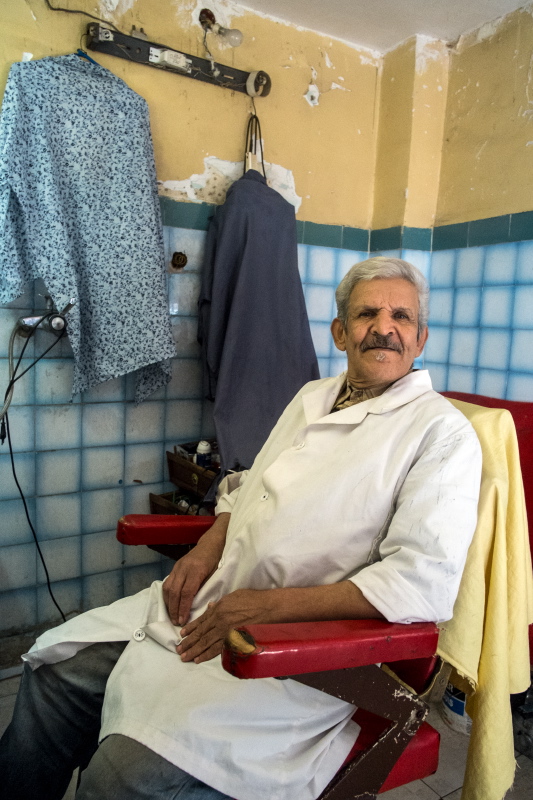 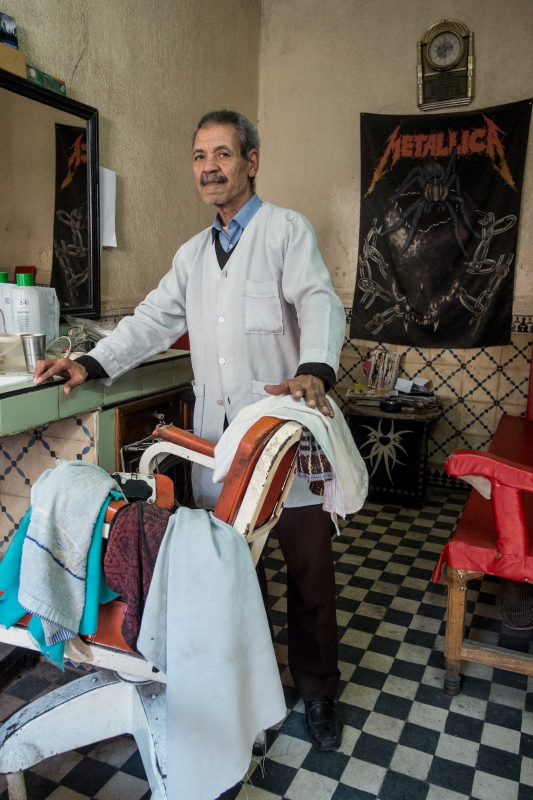 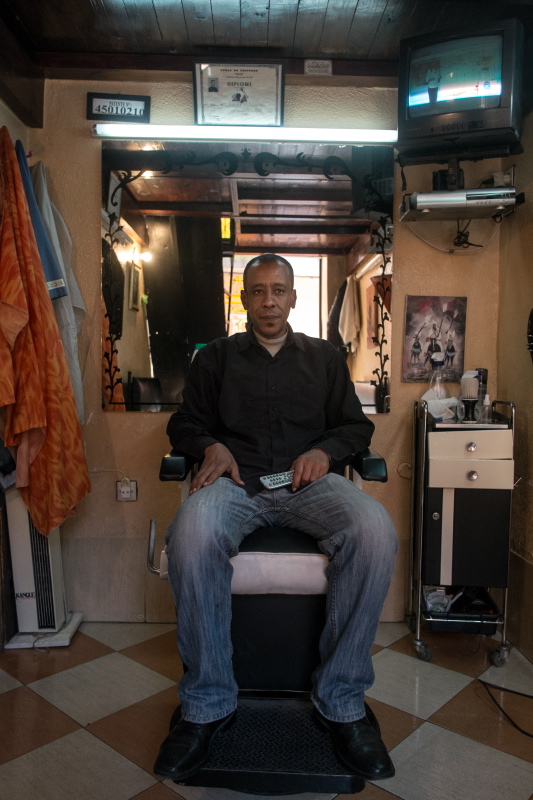 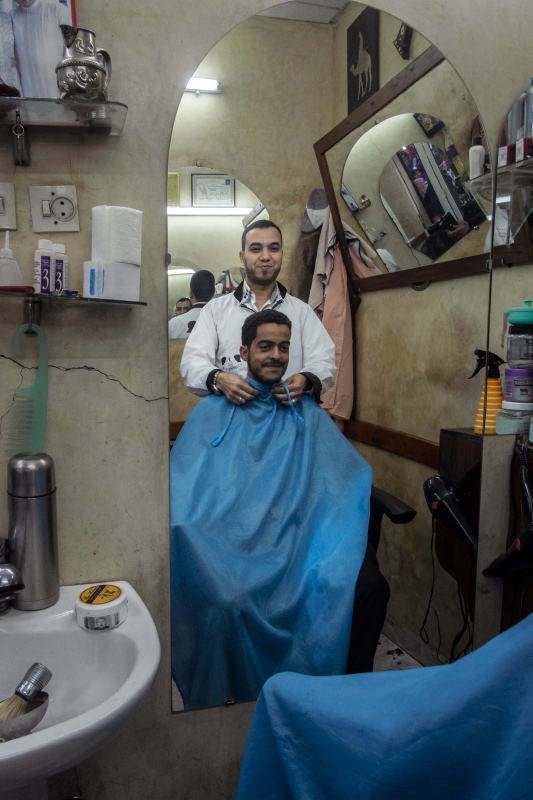 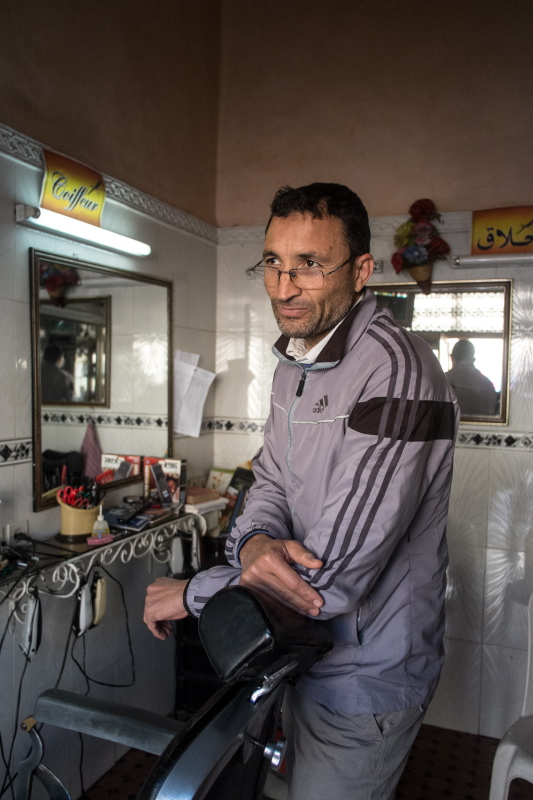 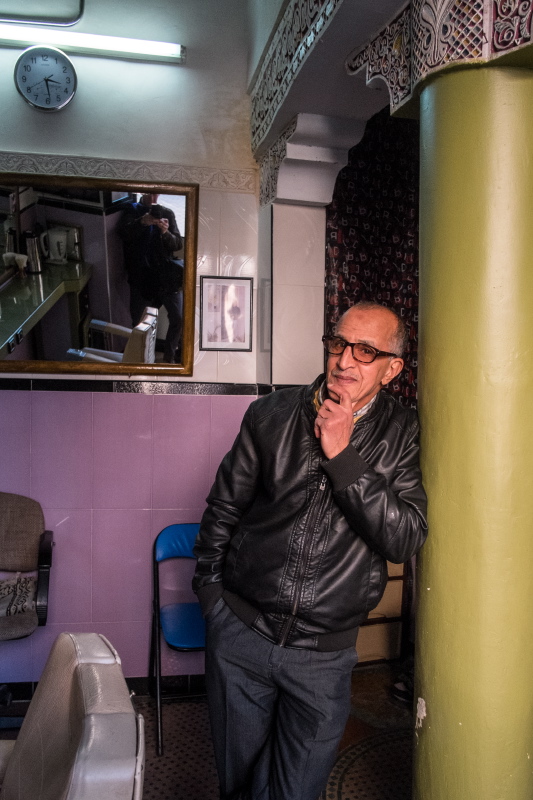 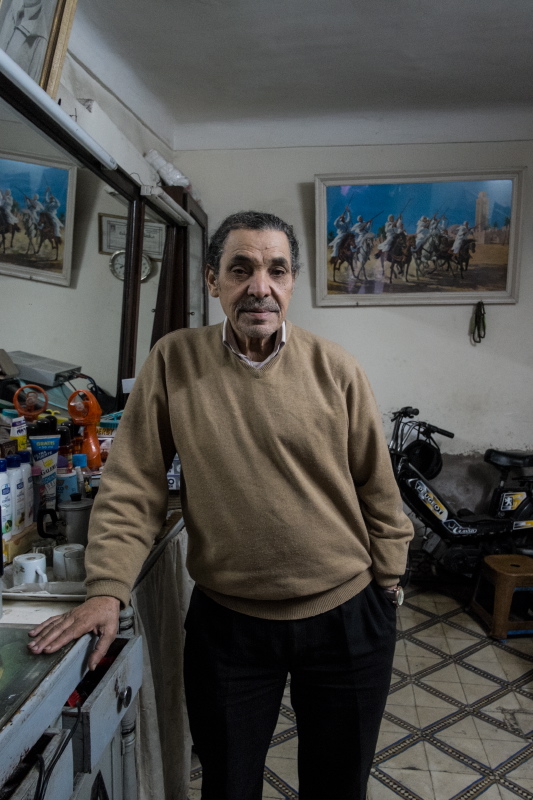 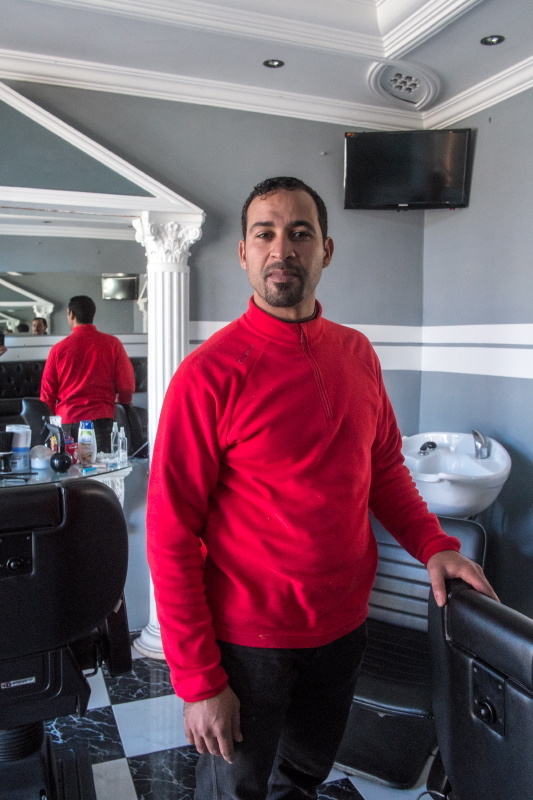 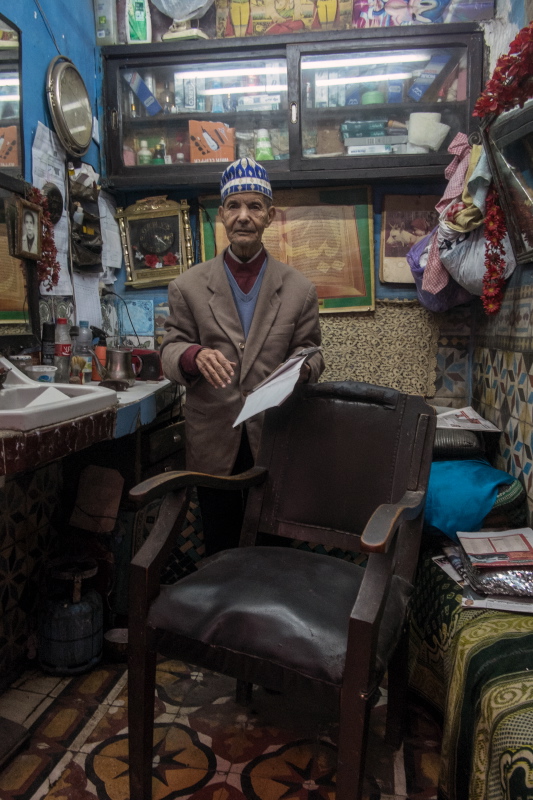