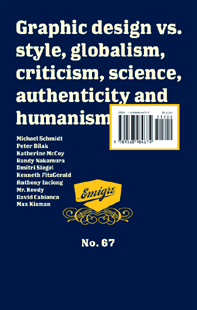 Hier die Ankündigung der aktuellsten Ausgabe. emigre issue 67
In his essay “Style is Not a Four Letter Word,” Mr. Keedy looks at the continuing feud in design between style and content, form and function, and even pleasure and utility, and tries to pin down how style got such a bad reputation, and how restoring its value may save design.

Kenneth FitzGerald in “Buzz Kill” continues to be amazed at the gyrations designers will go through to try and place themselves beyond criticism. His essay tries to drive a stake through the common techniques used by designers to neutralize criticism.

Anthony Inciong mourns the fact that design no longer leads but answers to the market and how this coincides with the dumbing down of design education. He recommends an increase in theory, history, and research as a way for young designers to build an awareness of the culture in which they and their objects will live.

Michael Schmidt and Katherine McCoy, in two separate essays, explore the role of graphic design in the age of globalization.

Randy Nakamura looks at the continuing attempt by graphic designers to raise design above its middlebrow pedigree.

David Cabianca reviews Fred Smeijer’s book “Type now: a manifesto, plus work so far.” Cabianca, who studies at the University of Reading (UK), looks at what a student of type design may take away from this book.

Rudy VanderLans interviews Peter Bilak, the designer of the popular Fedra type family and co-publisher of “DotDotDot” magazine, as well as Dmitri Siegel, a recent Yale graduate who has a knack for writing original and insightful design critiques.

Max Kisman lends us a few pages from his ongoing illustrated diary which currently contains over 15,000 pages.

Plus, the Readers Respond, featuring letters in response to past issues of Emigre magazine.