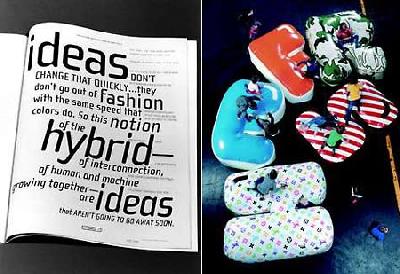 Since its opening on April 21, 2004, everything in the exhibition “Frische Schriften – Fresh Type” at the Museum for Design in Zurich has been dealing with the most recent developments in font design. The broad spectrum of font design – from conservative to experimental – shown through the example of Swiss works from the past few years will be on display until July 4, 2004.

The computer has fundamentally influenced the design of type fonts. Professional typographers and visual designers are presenting works that document the explosive developments of the past few decades. From a few characters to comprehensive font families – each type development is a quest for the unambiguous communication of messages. In part, the designs are oriented towards the rules of legibility, simplicity and functionality, and in part towards the demand for greater expressive individuality. Another section shows the playful translation of everyday objects into new forms of alphabets and scripts. On the other hand, existing alphabets are in a sense de-scripted to the point of pure pictography, where the symbols can no longer be deciphered as text. In addition, designs beyond the alphabet are presented; they fundamentally deal with the essence of symbol systems.