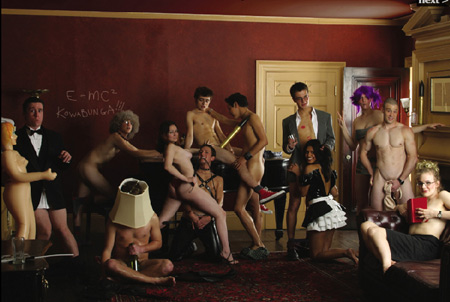 This first issue is full of art and probably contains a lot more text than anyone expected. And we hope that you’ll find it at least a little sexy. After all, there’s more to sex than pictures of naked women—even if they are Harvard women, who can be pretty damn hot. And if you feel that there isn’t enough nudity in the magazine, we agree completely. We like naked boys and girls who are sexy and fun and in love with each other and each other’s bodies and don’t mind telling everybody so—just try explaining that to career-minded Harvard students. Apparently we’re all planning to run for president one day (that will be interesting). But we have two words for you: ISSUE 2. Comp our staff, submit work, and (you know you want to) pose. H Bomb Magazine will be longer, smarter, and definitely hotter.

Maybe this first attempt is a little random and a bit awkward— because honestly, we didn’t know what the fuck we were doing— and a lot shorter than we would like it to be. But we do have a giddy sensation that we’ve begun something AMAZING that’s only going to get better and better. Um, kind of like…sex.