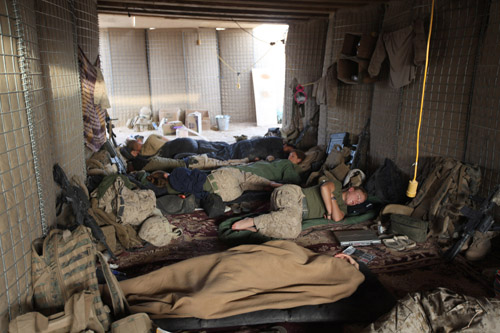 Aufgrund der Länge des Interviews in zwei Teilen. Der Authentizität wegen in Englisch.
All pictures are taken by Marine Sgt. Heidi Agostini and can also be found on www.marines.mil

SLANTED: First, what would be the appropriate address to “speak” to you?
Sgt Heidi Agostini: My proper title is Marine Sgt. Heidi Agostini.

What exactly is your job-title – other than you military rank? Do you belong to the Army or the Marines?
I’m a combat correspondent for the Marines. My job is to tell the Marine Corps story through video, photography and print journalism.

Why was the photo/video-reportage on the FET teams assigned to you?
I have to give you a bit of background on how I was assigned this story. I was assigned to I Marine Expeditionary Force (FWD) which is the headquarters element of all units in southern Afghanistan. It was very difficult to find something to write about or photograph on that camp. Most of the Marines work in offices, behind desks, eat hot meals and sleep in a bed. I couldn’t find anything interesting to write about. Lucky for me, I married a Marine in the same field. And lucky for me, he was deployed to Helmand province too. He was the Regimental Combat Team 7 Public Affairs chief, which fell directly under my unit. I asked him if he could help me find a story with the FET team since I was one of two female correspondents in country. He coordinated everything for me and a week later I arrived in Marjah with the FET team attached to 3rd Battalion, 6th Marines.

The culture in Afghanistan is strict. Women are not allowed to speak to males, especially males from a foreign country. This team of women Marines broke through barriers that left an impact in the lives of many Afghan civilians. They not only interacted with women, but with Afghan men and children. At times, Afghan men were more comfortable speaking with women Marines. They were able to gather information and in return, help the local Afghans with food, medical aid, farming supplies, seed and other items of necessity.

There were only two female combat correspondents in Helmand province, myself and Cpl. Megan Sindelar. I took her with me on this assignment. Male combat correspondents were not allowed to embed with the FET team simply because they are men. We have to be considerate of the local culture. Afghan men will not allow their women to speak with male journalists or be photographed by one.

Was that assignment special to you? What do you recall most – if it was different at all?
This assignment was very special to me. Images we capture through our lenses remain in our thoughts forever. I witnessed a shift in the role women play in the military. I witnessed history. I saw the females bearing the same 130-degree heat as the men. I saw them walk the same roads and carry the same weight.
I had a wonderful time with the team, but what I’ll remember the most was the camaraderie between the female and male Marines. It was like being surrounded by big brothers. I think the men were thankful to have the FET team assisting them. And the FET team was thankful the men were supportive of their mission. On our final night with 3rd Battalion, 6th Marines, the male Marines purchased chicken and potatoes from the bazaar and cooked dinner for the FET team. I’ll never forget that night.

I had found also some video footage taken by you of members of the FET teams which gave an impression of the female soldiers personality and attitude – they seemed pretty sensitive and “gentle” – How dangerous was the situation? Or the area in which it happened? They seemed so calm.
They have to be sensitive and gentle when dealing with Afghans, especially Afghan women. The FET team was there to help and engage with the locals. They had to befriend them and converse to let them know their intentions mean well. It’s also a very humbling experience for them. Here are a group of female Marines from the United States in a country where women are not equal. They see these pregnant Afghan women with no medical care. They see that their only source of water is the same canal they use to slaughter livestock. The Marines slowly start to remember how good they have it here in the United States and they take pity on Afghan women.

At that time, Marjah was still a dangerous district, especially during that week. The two battalions in Marjah sustained several casualties. While the FET team was hosting the medical outreach for local Afghan women and children, the male Marines provided security.

During our final day with the battalion in northern Marjah, an improvised explosive device detonated a few blocks away from our location where we had set up a medical clinic. Our male counterparts ran to assist the squad who encountered the IED. They returned with an Afghan man in handcuffs. He was caught with bomb-making material on-hand and admitted to setting the IED in place.
There was no panic or fear in anyone including the female Marines. It was almost as if they were numb to it all. Combat, hearing it or experiencing it had become an everyday event for us all.

How long was your tour with them?
I was embedded two weeks with them. Prior to that I spent a week with a different team in Helmand province.

Unfortunately we did not find any pictures from you with the female soldiers wearing a head scarf – coincidence or did the ladies not want this?
The Afghan culture was a little more relaxed in northern Marjah. There was no need for our females to wear scarves. The Afghan men were not offended. However, the FET team carried scarves with them just in case. Sometimes the FET Marines wore scarves on different missions to embrace the Afghan culture. Afghan women certainly found it amusing.

What was your impression of the female soldiers in the FET … did they feel more “Soldier” or “Woman/mother/female friend”?
I personally didn’t see them as friends, sisters or mothers. To me they were women Marines. The four female Marines I was attached to were very confident in their abilities to perform under dangerous situations. There is no doubt that the Marine Corps prepare their women to face the brutalities of combat. On the other hand, they’re women. And it’s a side of the Marine Corps that the public has never seen. Marines first, ladies always. In the morning they would brush their hair, teeth and get dressed. They’d slap on their heavy gear, grab their rifle and head out to perform their mission. When they returned back to camp they’d take their gear off, rest, eat, play cards with the male Marines and sleep.

What would you say is the main difference between a male and female soldier?
This has been debated for years. No one dares to ask me what I think because I’ll be honest. The main difference is the physical ability of male and women Marine. This was my second deployment. My first one was to Fallujah, Iraq in 2005. I’ve seen the weight carried by infantrymen. I’ve seen them run through fields, jump canals and jump rooftops. And I’ve seen them do it again an hour later in scorching heat. I’m not convinced that women are capable to do that. There may be few, but the majority cannot.

One picture shows a female soldier washing in the “hygiene area” next to a male soldier* – did the female soldiers speak to you of such situations as irritating or completely normal? – of, course you kind of know what you are up against, rationally, before you assign – but emotionally, were there rolled eyeballs?
During my time with the FET we stayed in four different camps. At our first camp, we stayed in the same small tent as male Marines. Eight Marines gave up their cots for us and moved to the other end of the tent. They weren’t bothered at all. They were very hospitable. I think they were happy to see women that can somewhat relate to them.

At our second camp we stayed in an open tent and slept on the jagged rocky floor. We had the entire tent to ourselves. The camp was bigger and the men were less hospitable. I could hear them laughing at us.

Our third camp was the most memorable. We slept inside a bunker on old flea-infested rugs and we battled camel spiders and mice all night. As soon as we arrived on camp, the FET team joined in a game of volleyball with the Afghan army soldiers and male Marines. I overheard one Marine barking orders to an Afghan soldier telling him to clean up the heads (Bathrooms) because there were guests on the camp. This camp was small with only about 20 Marines and 10 Afghan soldiers. The male Marines were approachable and felt very comfortable with the females.
Our final stop was a relief. We slept in a tent with air conditioning. The tent had a divider which separated us from the men. The males set up a small bathroom area for us behind our tent with a sign that read, “Females only.”

We were unable to shower at every camp. The showers were outdoors and were makeshift stalls that came up chest-high with a ten gallon bag of water hanging on top. The water was heated by the sun. If we attempted to shower we would’ve exposed a bit too much of our bodies.

As you saw in the photos, we would brush our teeth and hair next to our male counterparts in the morning. They didn’t mind at all. I know they enjoyed the smell of the fruity lotion the females used. The bathrooms were similar to the showers. It was a wooden stall with a hollow wooden box with a hole cut out. We used WAG bags. The embarrassing part was using the bathroom in a wag bag, sealing it up, walking 50 feet in front of all the male Marines and tossing the bag into the fire pit. They can’t help but laugh. The female Marines ignore the laughs and doubts. They know what they’re there to do and stay focused.

Some pictures we are especially fond of, like the one showing Lance Cpl. Yumol with the mirror “getting ready” – are you looking for such photographic opportunities?
I wanted to show the public that female Marines still have to maintain a sense of being ladylike. The FET team was in a field environment, sleeping on the ground in a dirty and grimy uniform that has soaked in all the sweat. They smell horrible and there’s dirt in their hair and face. But they still have a job to do and they still have to be presentable.

END OF PART I