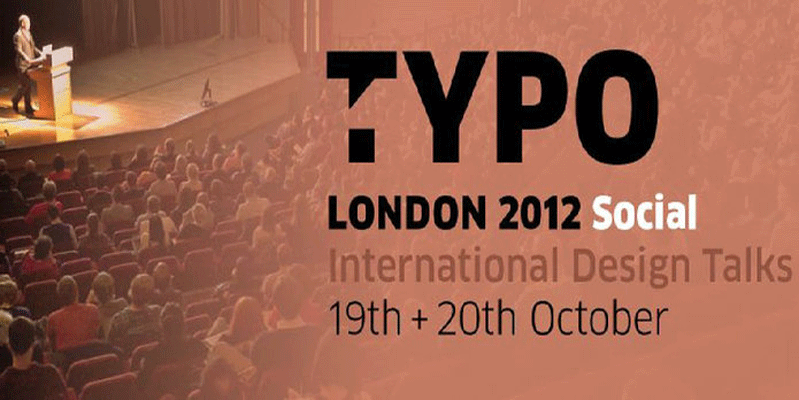 There is little more than two months before the second TYPO London kicks off at the Logan Hall in Bloomsbury, London. The early bird subscription period will end on August 31, leaving only a precious few days to benefit from considerable discounts on ticket prices.

»Much like for its London premiere in 2011, we have managed to assemble an outstanding lineup of speakers, consisting of A-list stars from the world of graphic design and beyond«, says Head of Programme Adrian Shaughnessy. »Over 25 communication and design, digital media, marketing and advertising, technology, culture, entertainment and business experts have confirmed so far, with some exciting additions still to be announced.«

Vaughan Oliver for example, who in the eyes of many is the epitome of the graphic designer as artist. His record covers for the mythical 4AD label are examples of graphic design at its most poetic and emotive.  As one reviewer wrote recently about Oliver’s deluxe packaging of the all the Pixies albums:  »… it’s not really a music collectible but rather a graphic art collectible. It’s an awesome thing.«

Tony Chambers is one of the very few art directors in charge of a high profile magazines. He has been Editor-In-Chief of Wallpaper*, one of the great success stories in magazine publishing, since March 2007.

Kate Moross is a prolific graphic artist, art director and filmmaker who has worked extensively within the music industry. She works as art director for Simian Mobile Disco, Jessie Ware and L-Vis 1990. Her commercial clients include Nike, Kiehl’s, Glastonbury, Nokia, and Cadbury. Creative Review spotted Kate’s potential when she was still a student: »Moross’ work is wonderfully varied in style though invariably colourful and eye-catching, as she utilises hand-drawn elements, isometric and interlocking shapes and patterns, hand-drawn illustration and also vector graphic work.« We are looking forward to see Kate present her latest projects on stage in October.

Bibliotheque is an independent design studio based in London, founded in 2003 by designers Tim Beard, Jonathon Jeffrey and Mason Wells. Famous for their typographic rigour and conceptual strength, Bibliotheque has earned an international reputation as an innovative company working in the fields of brand identity, spatial and digital design. Their great passion for design has led them to stage exhibitions most notably in 2007, when they funded and curated an exhibition of the designer Otl Aicher’s 1972 Olympic Identity from their archive of mid-century graphic design.

Olympic Identity is a topic that also independent Creative Director Patrick Cox knows a lot about. Formerly Executive Creative Director of Wolff Olins, he worked on the controversial logo and brand design of the London 2012 Olympic Games. Today he works with organisations and individuals facing complex design and innovation challenges. He says: »Clients’ needs have changed, and the branding and communications industry has struggled to adapt… to create meaningful shifts companies have to make new things and create new brand-defining experiences.«

The agency A Practice for Everyday Life is increasingly regarded as one of London’s leading exponent of cultural branding. Working on everything from brand identity, print to signage, wayfinding and exhibition design, they have recently completed the exhibition design and publication of »Bauhaus: Art as Life« at Barbican Art Gallery, and a new visual identity for Witte de With Center for Contemporary Art in Rotterdam.

»What I like about the idea of having ‘social’ as our theme is that there are so many ways of being social – both as a designer and as a human being« says Adrian Shaughnessy. »It is thinking about the social implications of our work as designers. It is sharing professional experiences at an event like TYPO London. I also hope people will use the two days to look at what they are doing as practitioners or as students. It is no longer possible to be a designer without considering the social implications of what we do – environmentally, ethically and culturally. I hope the speakers and the audience explore these ideas and themes, but also that  everyone has a chance to meet people they’ve never met before and forge lasting relationships.«