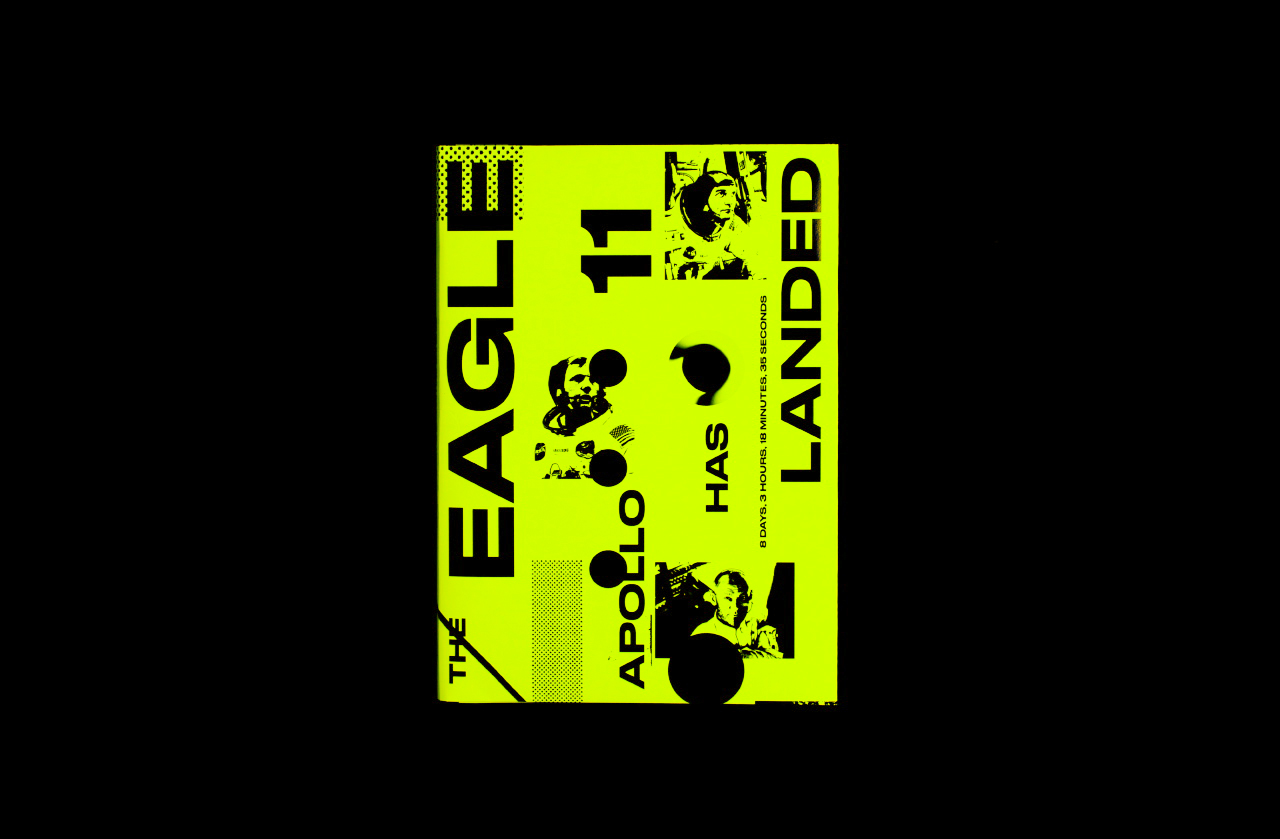 Apollo 11—The eagle has landed*

Apollo 11 was the spaceflight that landed the first two humans on the Moon: Commander Neil Armstrong and lunar module pilot Buzz Aldrin, both American. They landed the Apollo Lunar Module Eagle on July 20th, 1969, at 20:17 UTC. Armstrong became the first person to step onto the lunar surface six hours later on July 21st, at 02:56:15 UTC; Aldrin joined him 19 minutes later.

Despite some technical and weather difficulties, ghostly black and white images were broadcasted to at least 600 million people on Earth. Armstrong uncovered a plaque mounted on the descent stage bearing two drawings of Earth (of the western and eastern hemispheres), an inscription, and signatures of the astronauts and President Nixon. The inscription read: “Here men from the planet Earth first set foot upon the Moon, July 1969 A.D. We came in peace for all mankind.” Later he said this famous quote that we all know “That’s one small step for a man.”

Back in those days, President Nixon new how to captured the event for himself: “Hello, Neil and Buzz. I’m talking to you by telephone from the Oval Room at the White House. And this certainly has to be the most historic telephone call ever made. I just can’t tell you how proud we all are of what you’ve done. For every American, this has to be the proudest day of our lives. And for people all over the world, I am sure they too join with Americans in recognizing what an immense feat this is. Because of what you have done, the heavens have become a part of man’s world. And as you talk to us from the Sea of Tranquillity, it inspires us to redouble our efforts to bring peace and tranquillity to Earth. For one priceless moment in the whole history of man, all the people on this Earth are truly one: one in their pride in what you have done, and one in our prayers that you will return safely to Earth.”
Armstrong answers: “Thank you, Mr. President. It’s a great honor and privilege for us to be here, representing not only the United States, but men of peace of all nations, and with interest and curiosity, and men with a vision for the future.”

Open_collab is based on an idea by Patrick Thomas. In 2012, he began to work on a solo exhibition in Düsseldorf, Germany. The idea was simple: to use the mechanical print process of silkscreen to combine found elements in a random way, with a minimum of planning and composition. He was interested in provoking unexpected juxtapositions, chance encounters, and dialogues, between elements that would not usually be found together. In 2019, whilst on a residency in Rome without access to proper print facilities, it occurred to him that he could simplify the layering process greatly by using a standard Din A4 laser printer to overprint images several times on the same sheet of paper. This was the starting point for Open_collab.
In June 2019, Mara Schneider, Marie Schaller, Florian Brugger, and Lars Harmsen from Melville Brand Design Munich teamed up with Markus Lange from Cairo to work on the topic APOLLO 11.

* Neil Armstrong spoke the phrase “The eagle has landed” to announce the successful landing of the Apollo 11 lunar module named “Eagle” in the Sea of Tranquility on the Moon on July 20th, 1969. Today, the phrase is used colloquially to indicate any successful arrival or completion of a “mission” objective.

Apollo 11—The eagle has landed* 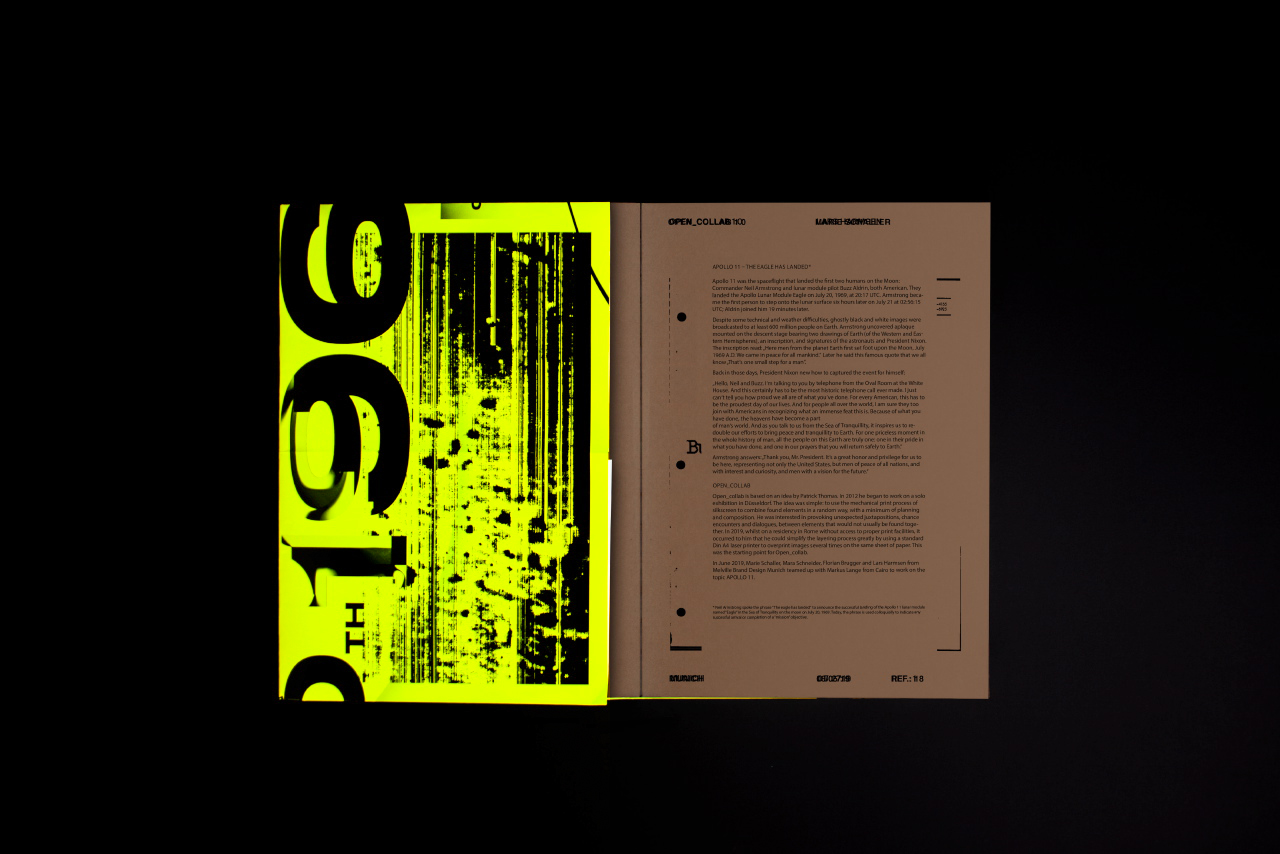 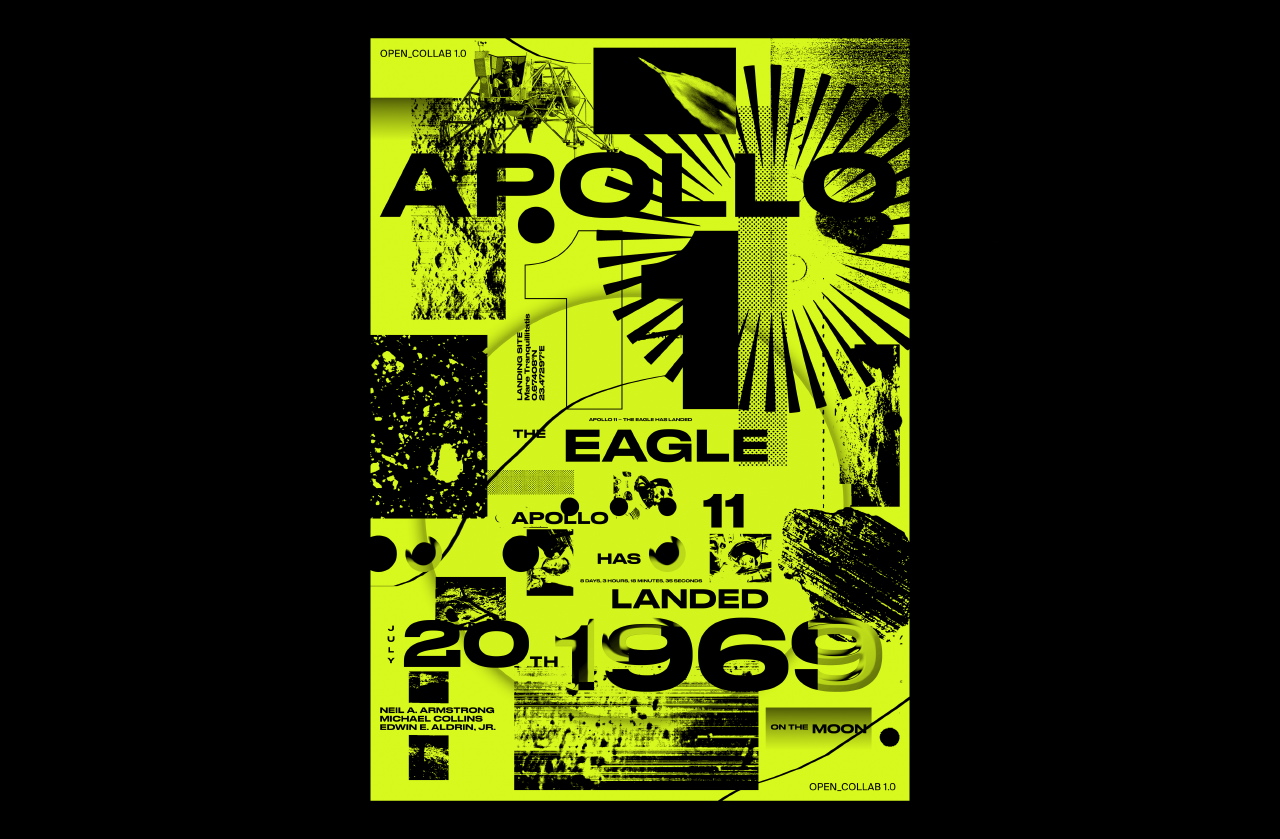 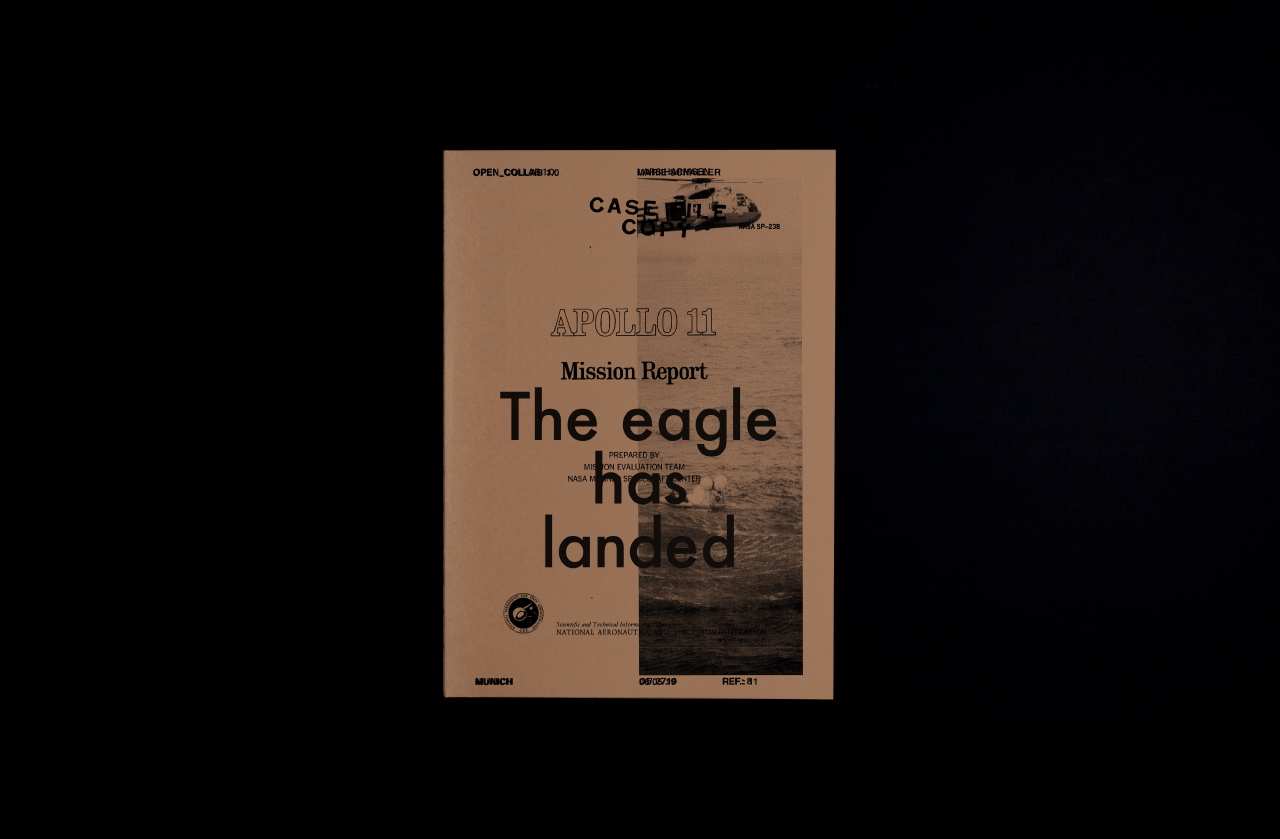 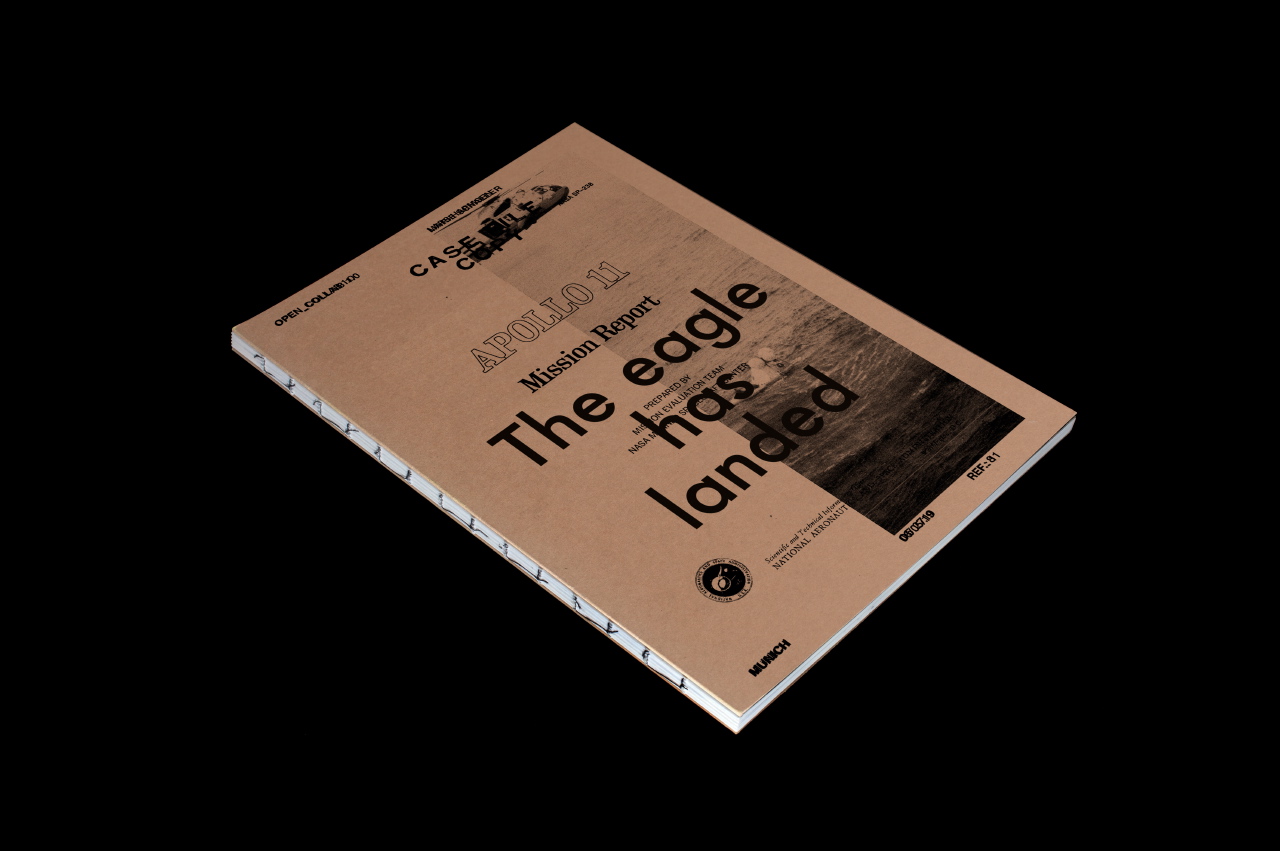 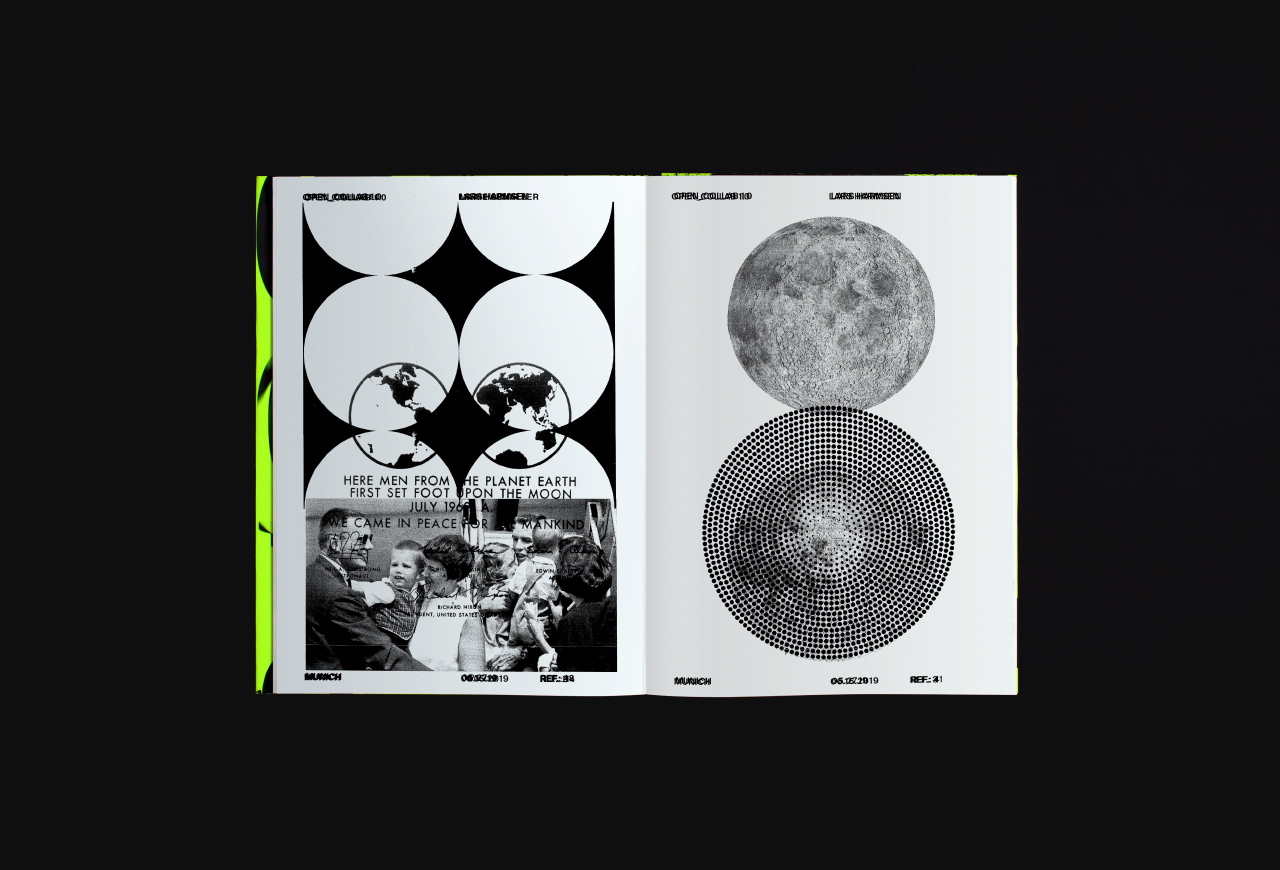 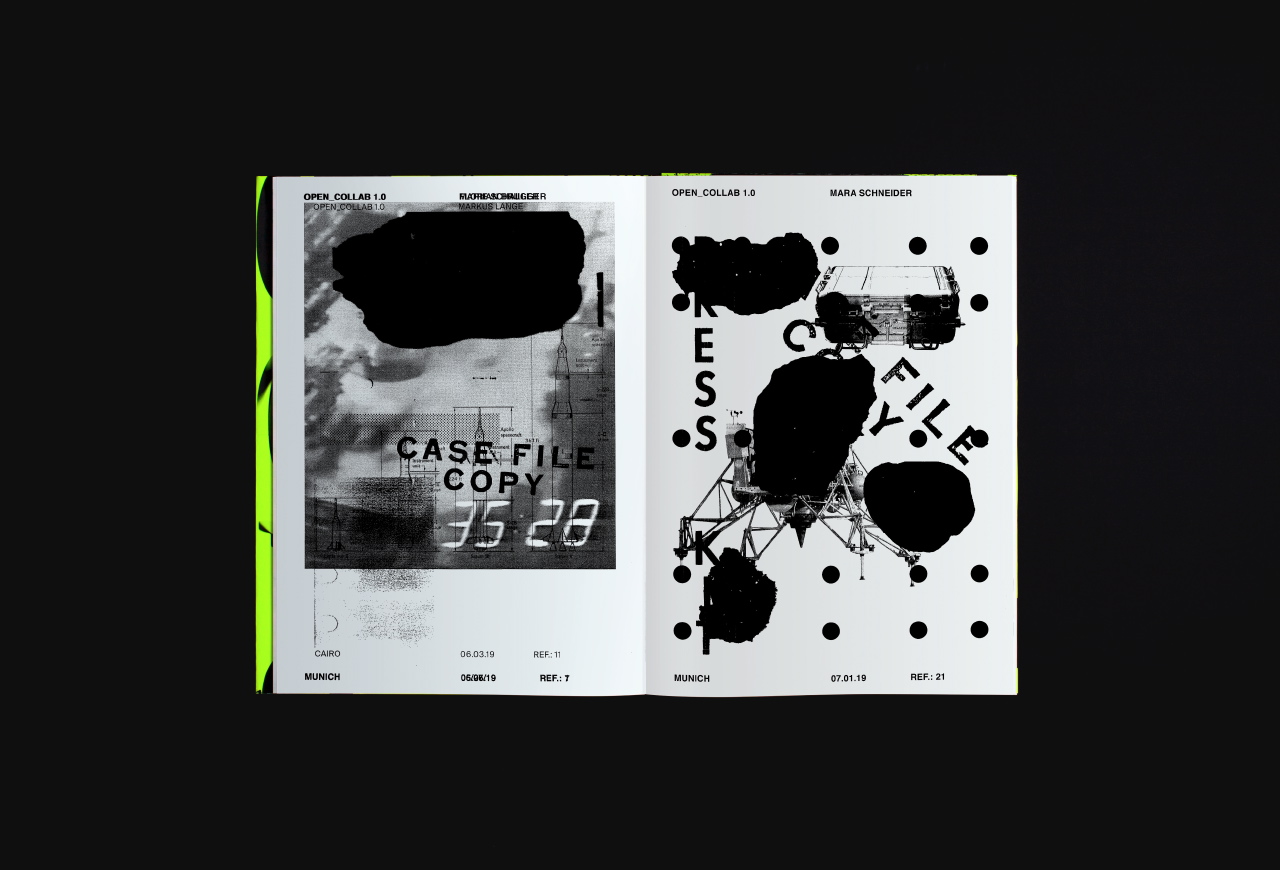 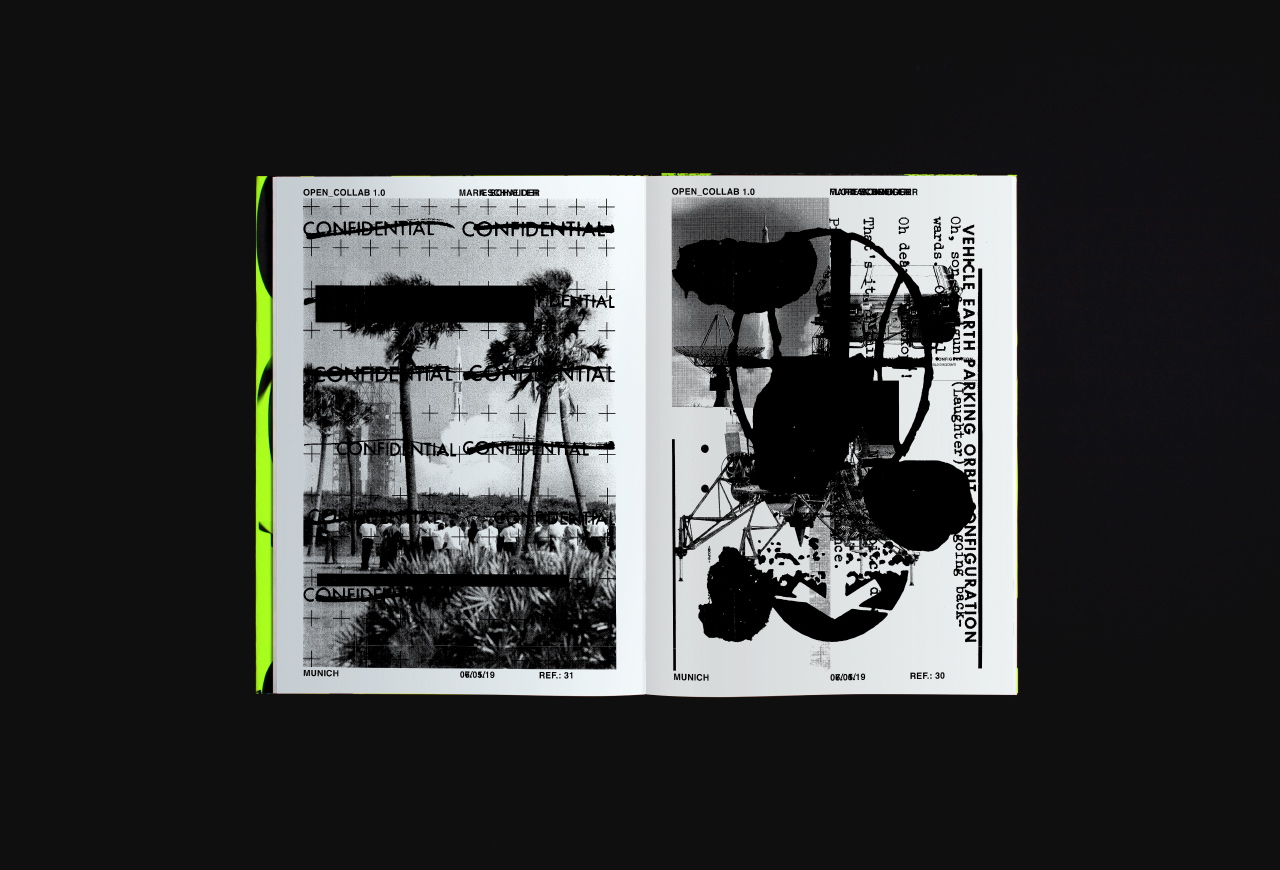 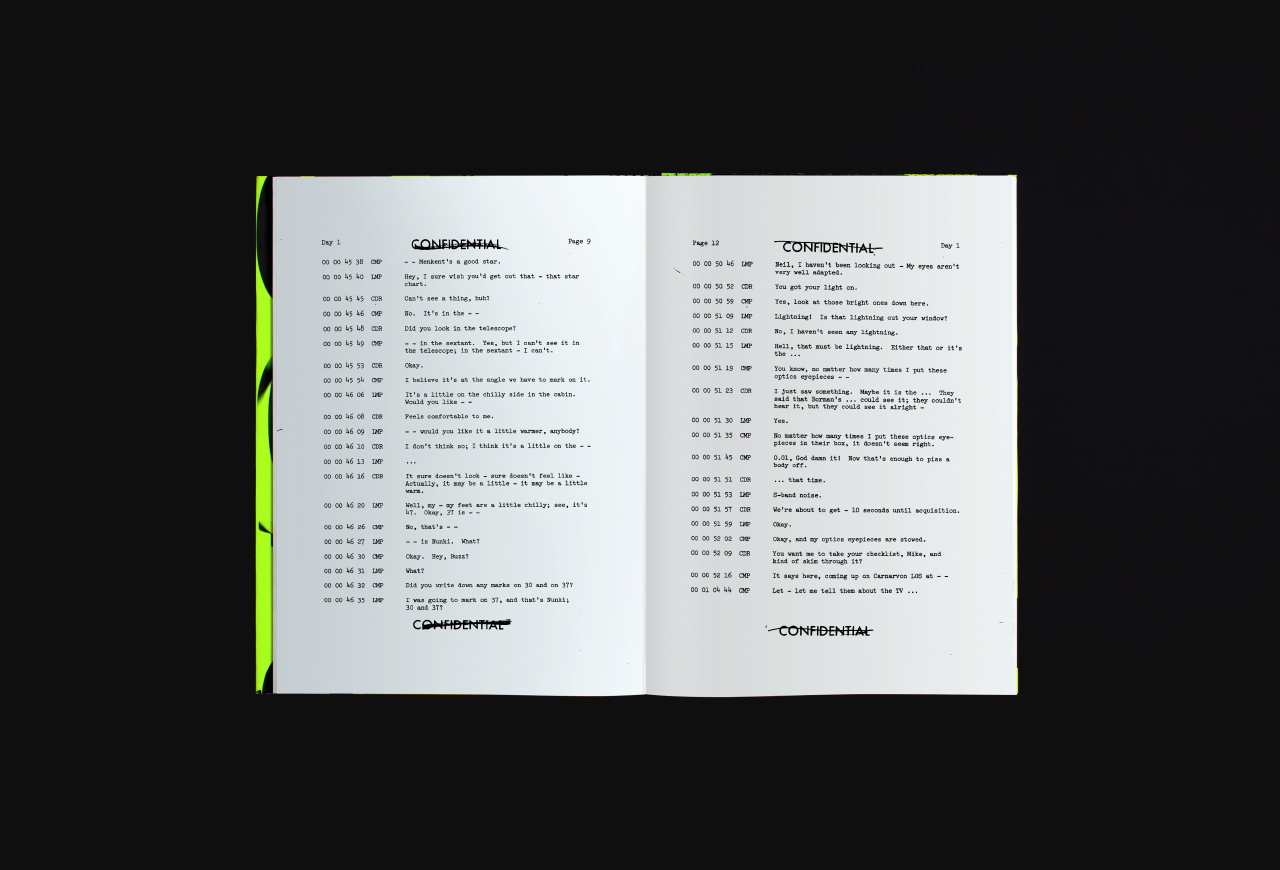 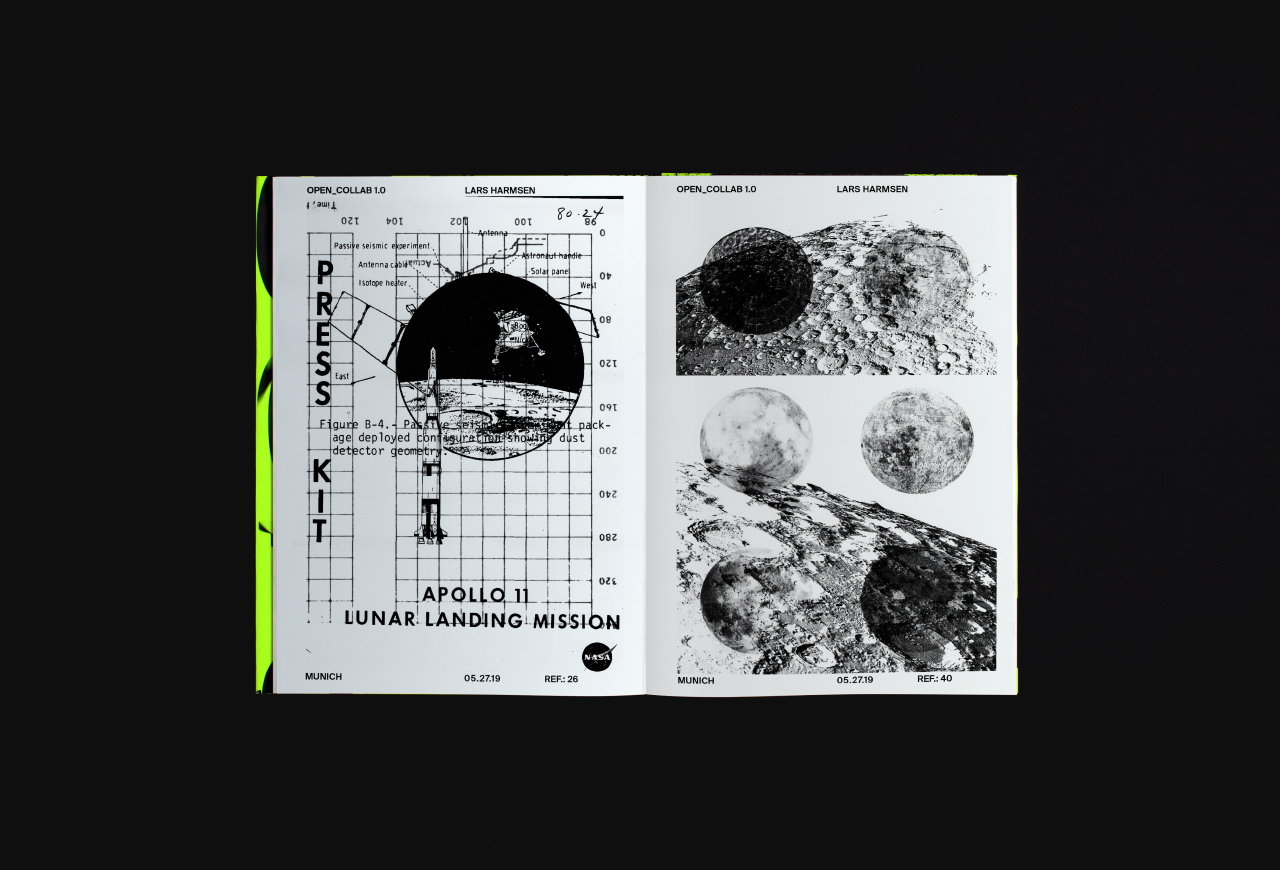 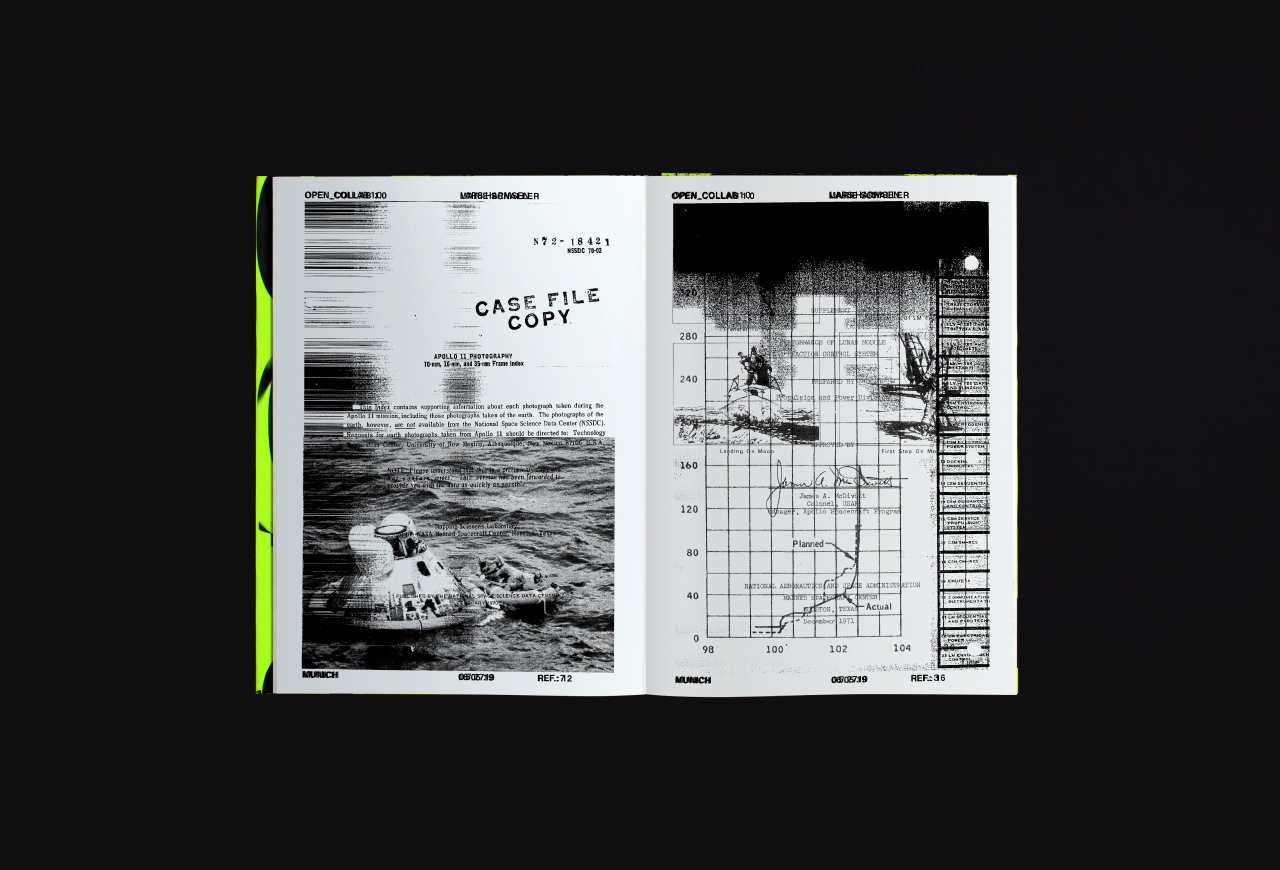 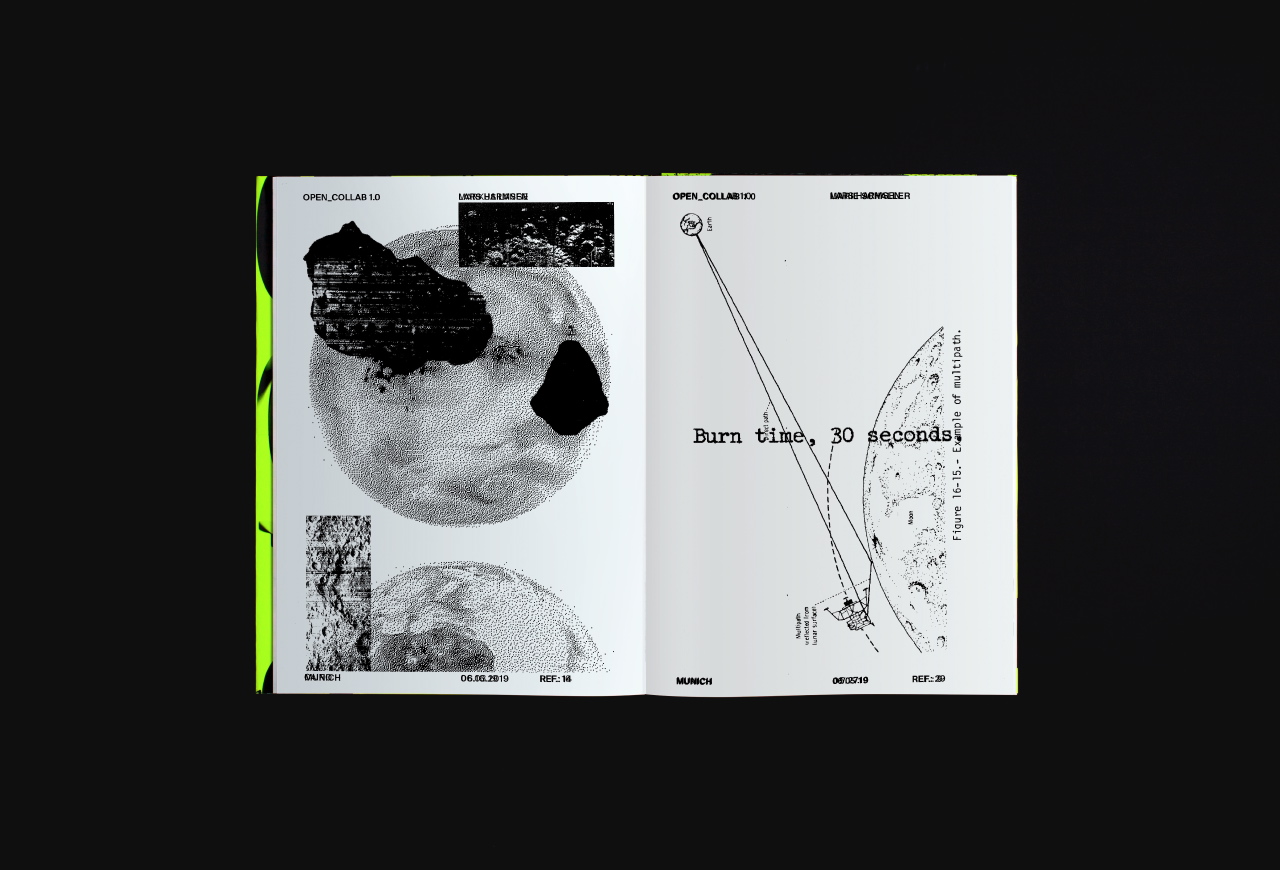 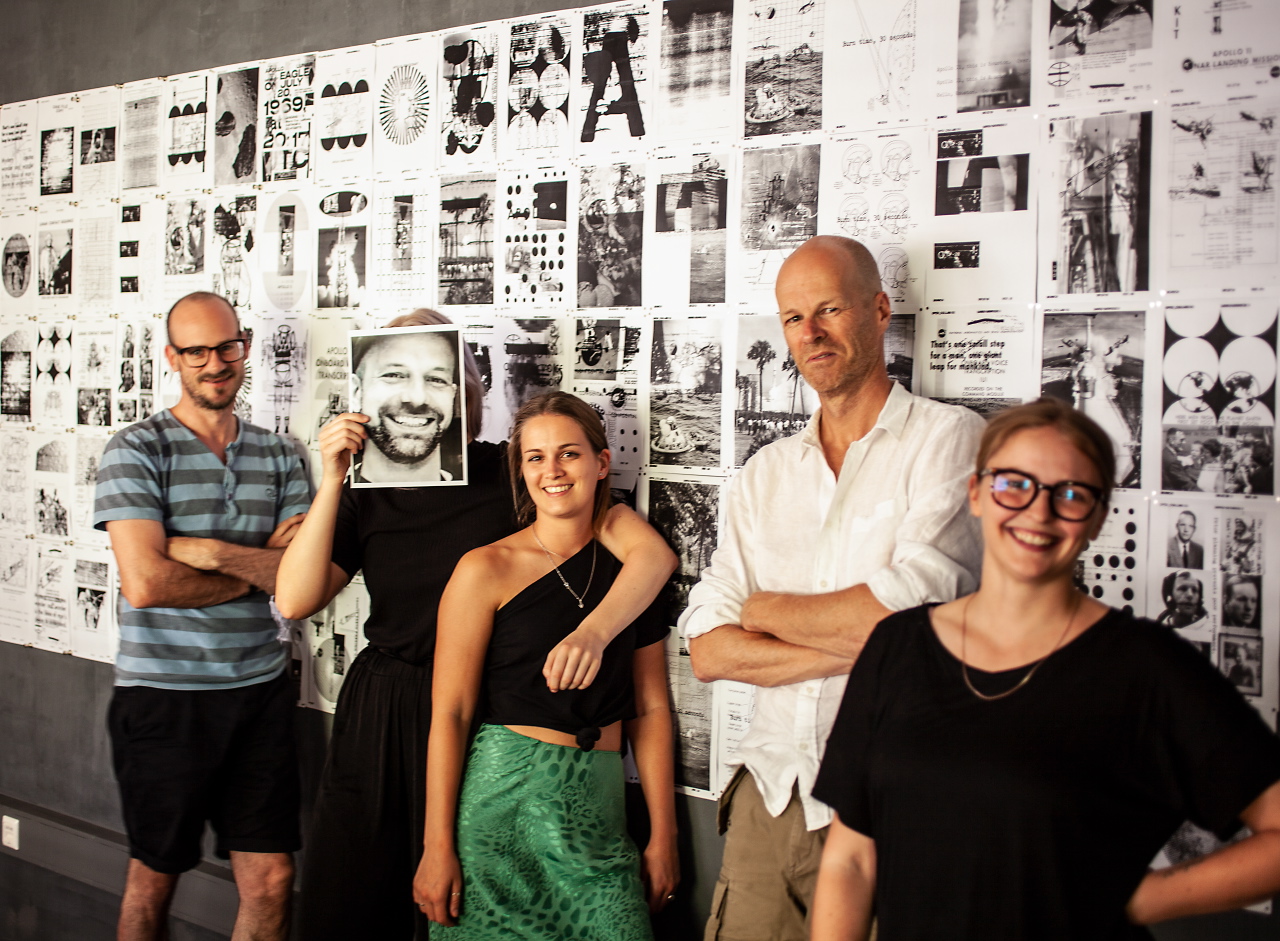 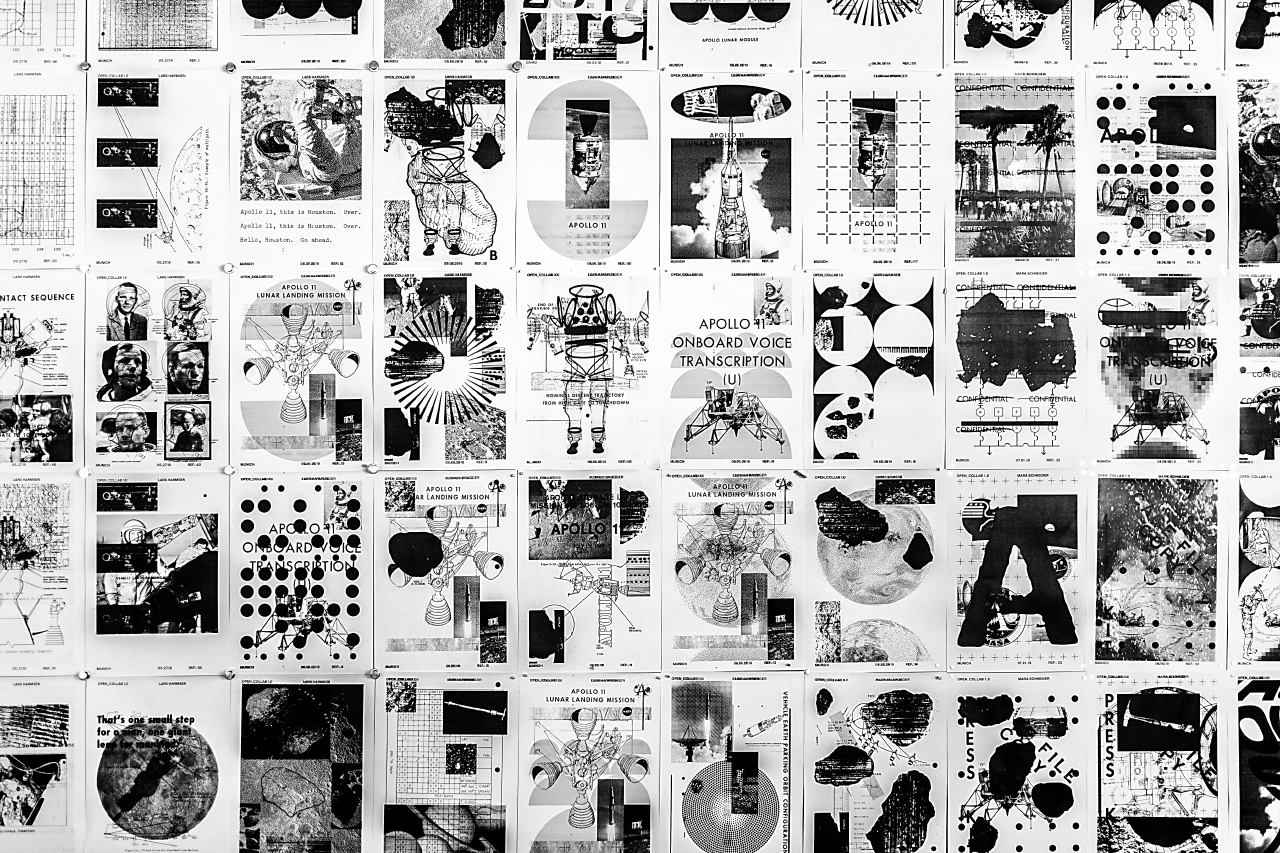 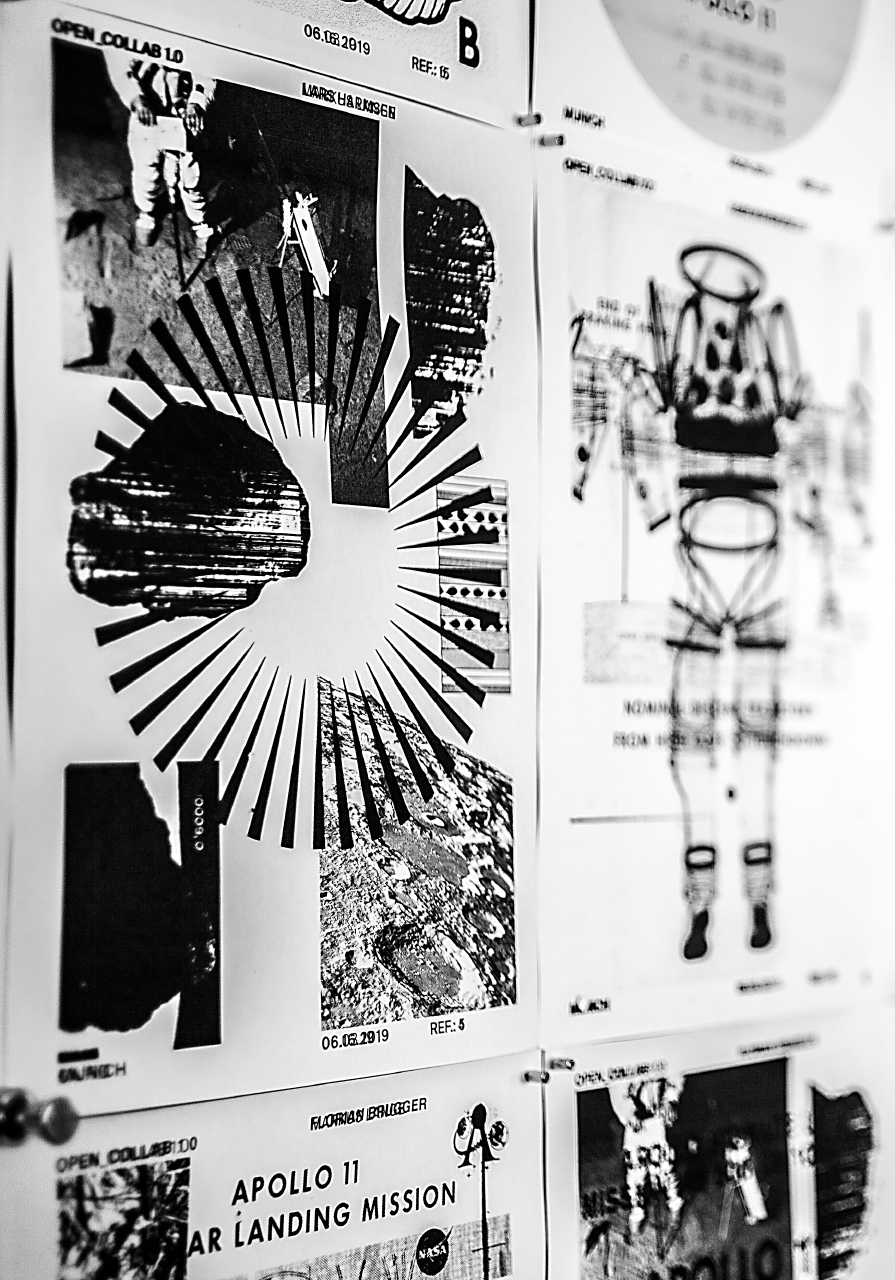 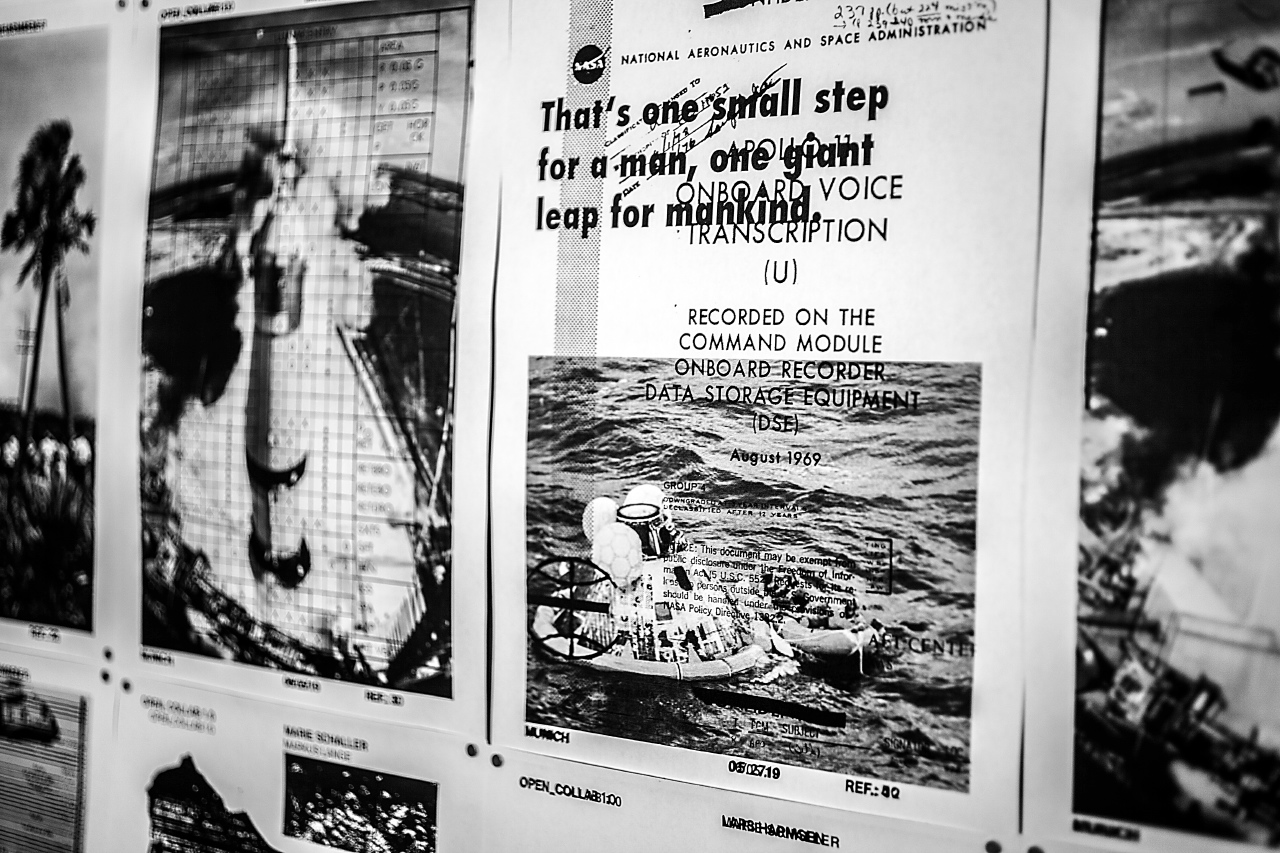 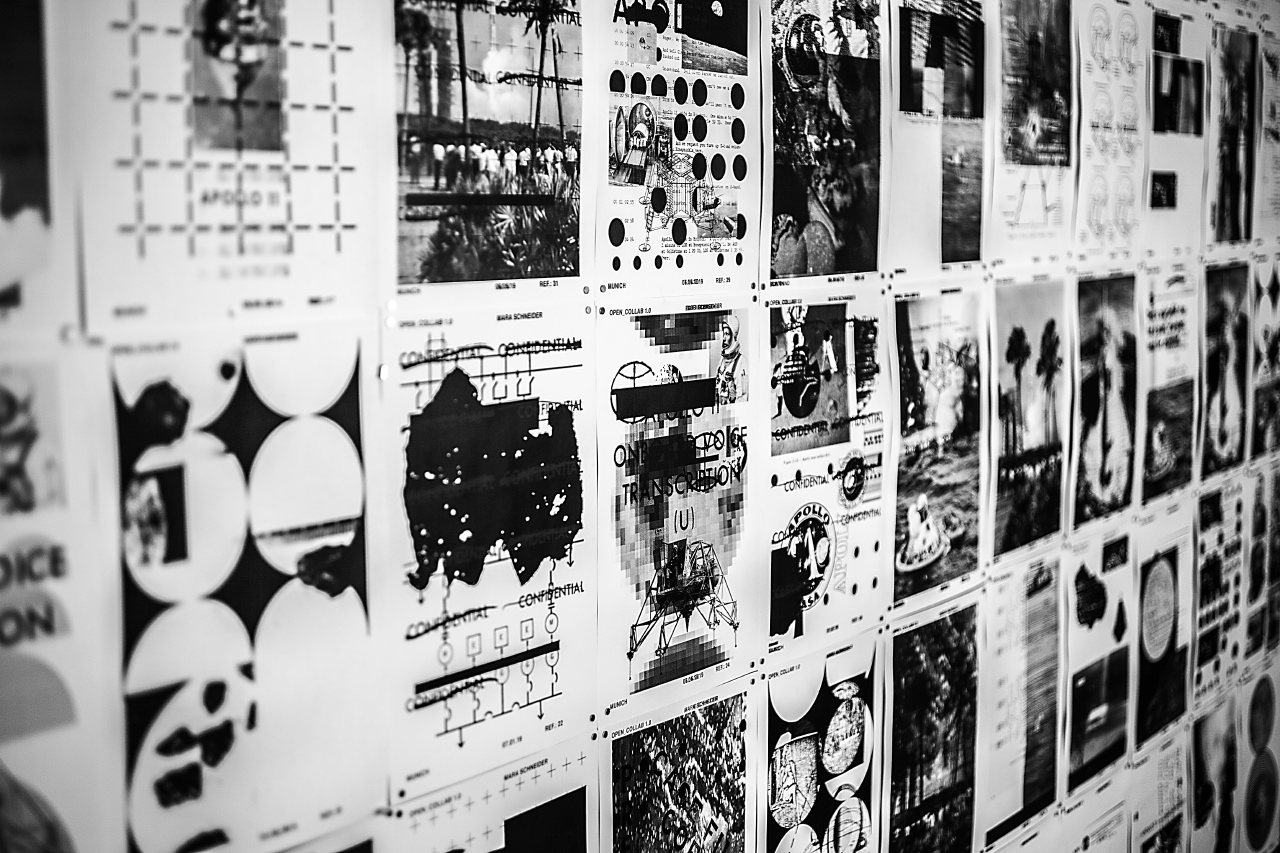 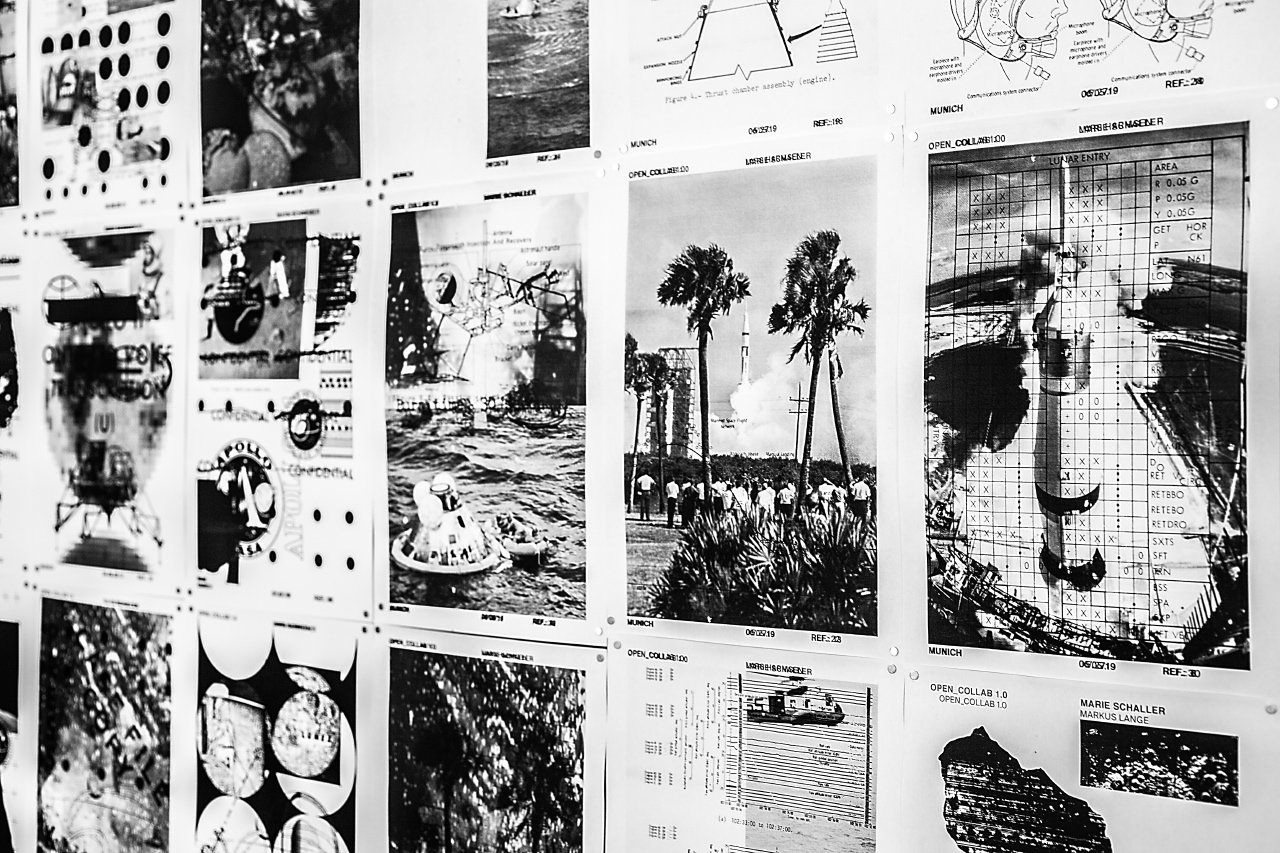