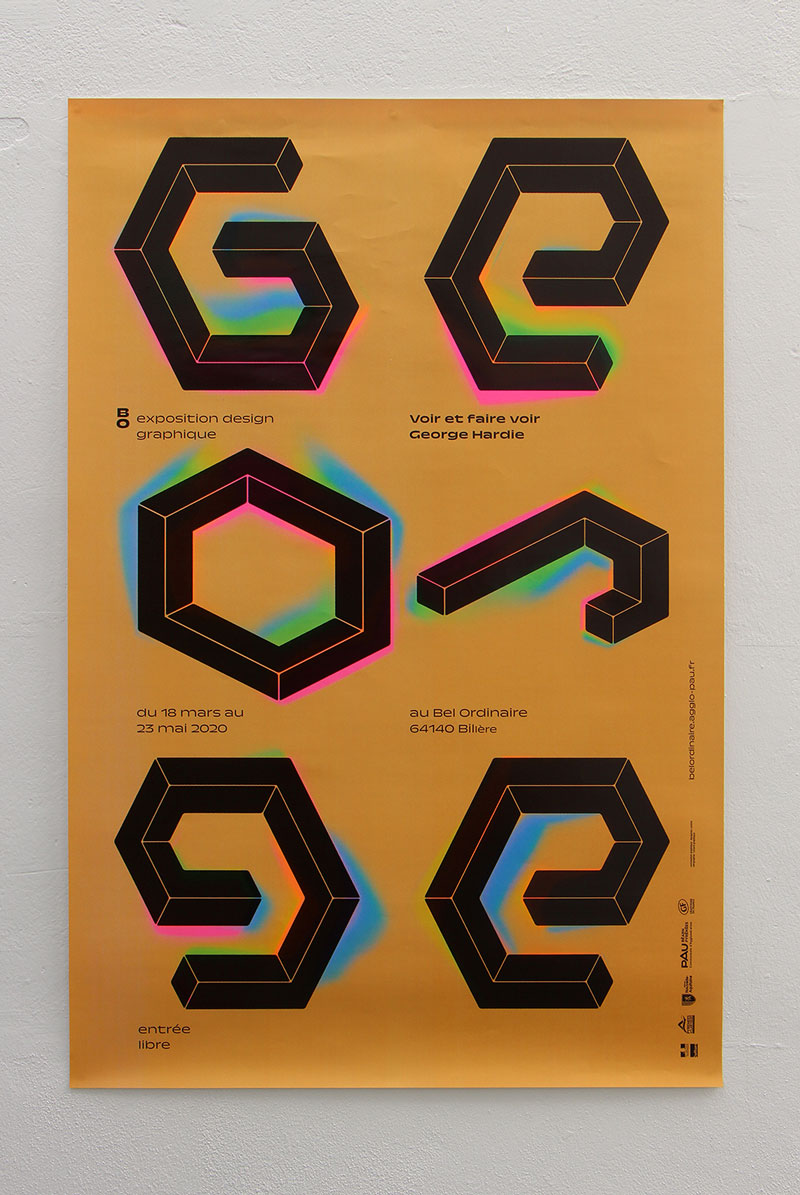 At a dinner party some years ago a fellow guest asked George Hardie what he did for a living. The acclaimed English Illustrator, Professor of Graphic Design, replied, “I’m an illustrator, designer, and teacher.” Unsatisfied, his table mate pressed, “No, what do you really do?” Hardie is an unflaggingly polite, but most of all, modest, English gentleman. So, after a lengthy pause he responded, “I notice things and I get things noticed,” a fairly unassuming assessment of a five-decade-old career as, he semi-ironically claims, that of a ‘jobbing illustrator.’
– The rules of the game, Daniel Nadel, Eye no. 58 vol. 15, 2005

George’s work is visible world wide, anyone with a poster or an album cover of Pink Floyd or Led Zeppelin is likely to be looking at one of his designs. Regularly among the world’s top ten favorite album covers is his prism for Dark Side of The Moon (designed with and for Hipgnosis) also his phallic Zeppelin crash for Led Zeppelin’s 1969 debut album. His work has been exhibited widely with exhibitions that have included one-person retrospective at Brighton, Barcelona and Ljubljana. His books have been shown at The Pentagram Gallery in London and in Nagoya, Japan. George Hardie has enjoyed a 51-year-long career, one which includes many international commissions from a wide variety of clients. He gained widespread notice through his stamp designs for the Royal Mail including Channel Tunnel stamps for the Royal Mail and La Poste in 1994. He also created illustrations for the Magic stamps produced in 2005. George has been awarded by D&AD, the global association for Creative Advertising & Design: four 1970s D&AD silver awards with Hipgnosis, and a fifth silver award for his Millennium stamp. He was elected a Member of the Art Workers Guild (1997) and subsequently became Master of the Guild and a Royal Designer for Industry.

George Hardie was the tutor of the exhibition designers and curators, on the Masters course at the University of Brighton from 2007–2009. These being the last years as head of the masters course and his teaching career, they were quite blessed with getting to work so closely with him and acquiring a great awareness of their role as thinkers, makers, and designers. The designers had been wanting, for a while, to have the space to present his work to audiences outside of the UK to show the great breathe and range of his other less famous works so that they too could get some recognition just as his work for music album covers has had. For them, George Hardie is an essential artist in the history of British graphic design. A humble/modest/discreet English gentleman, endowed with great finesse of mind and remarkable kindness, George is also a great collector of everything and anything, to the great despair of his wife Avril. His work unfolds like his collections: by associations of ideas and forms.

The exhibition has been categorized in 13 sections that allow one to discover the great variety, thoroughness, and facetiousness thanks to an abundant graphic vocabulary that George has developed for more than 50 years. There are 217 pieces of work gathered in this exhibition. For the scenography, the designers color coded the sections, choosing colors that George uses most often; a birds eye view of the room show you that the central picture rail forms a ‘G.’ A wink to George’s signature, which he often slips in his productions and which takes the shape of the staircase which leads to his studio of work. The exhibition poster is also a tribute to the isometric style of George’s work while playing with the concept of movement. They wanted the exhibition to take up the basics of George’s work: form, volume, color, multiple levels of reading … 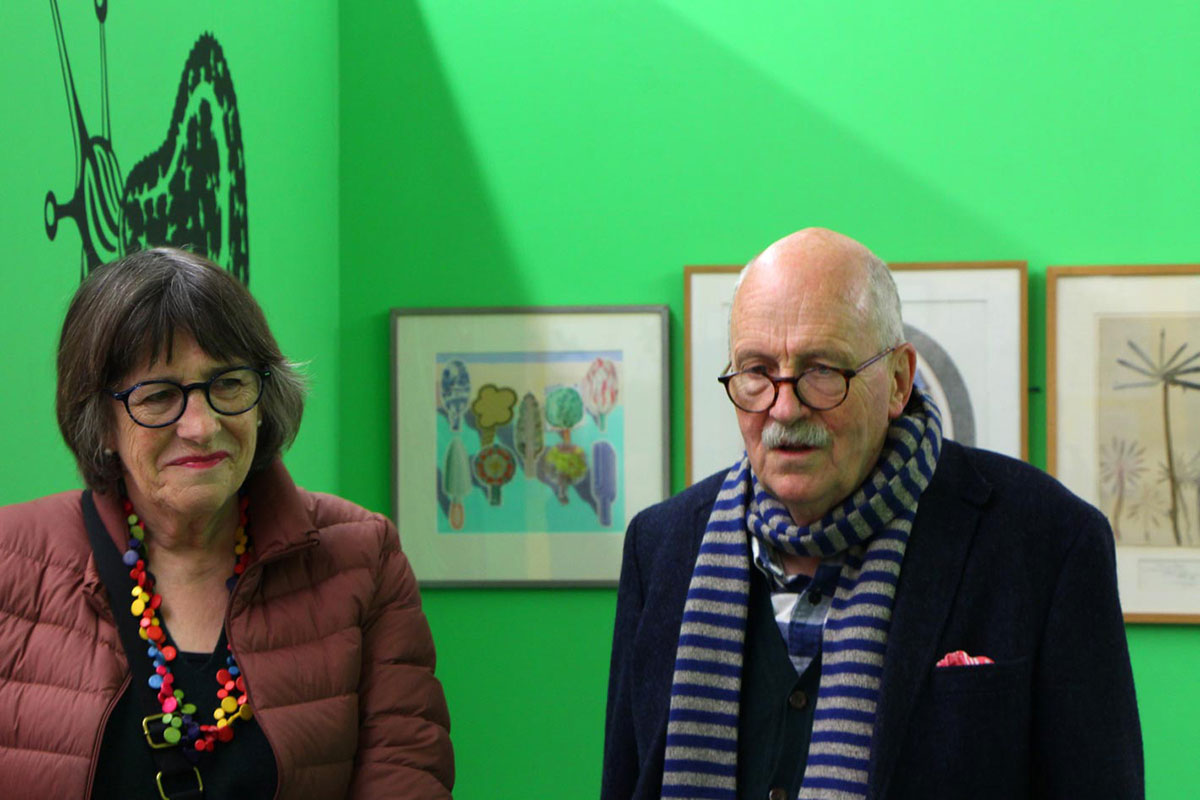 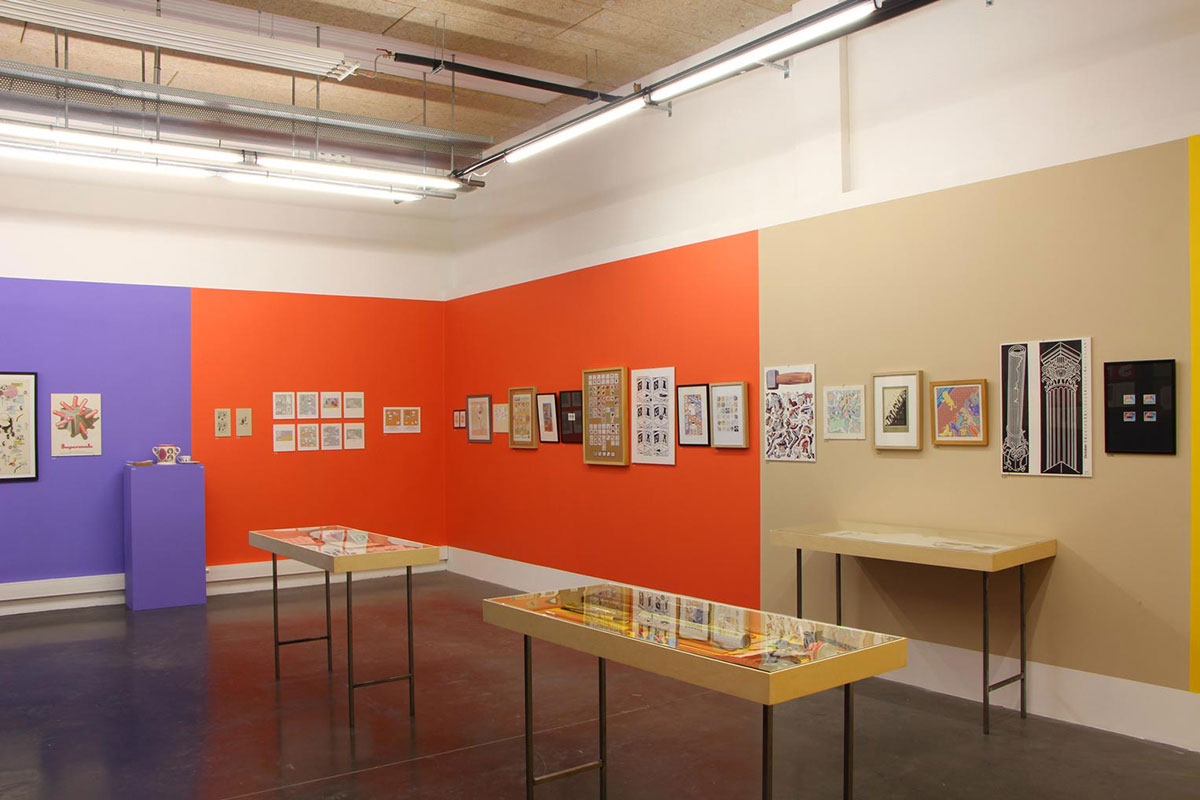 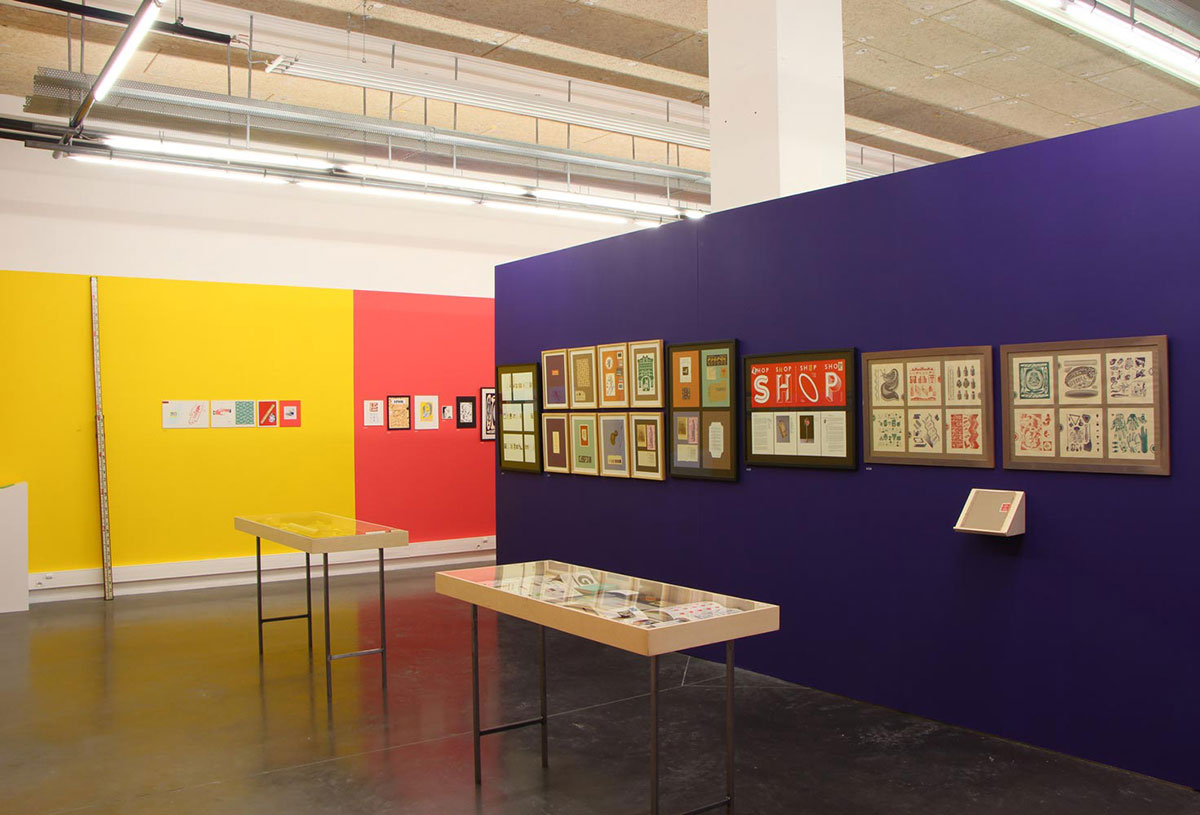 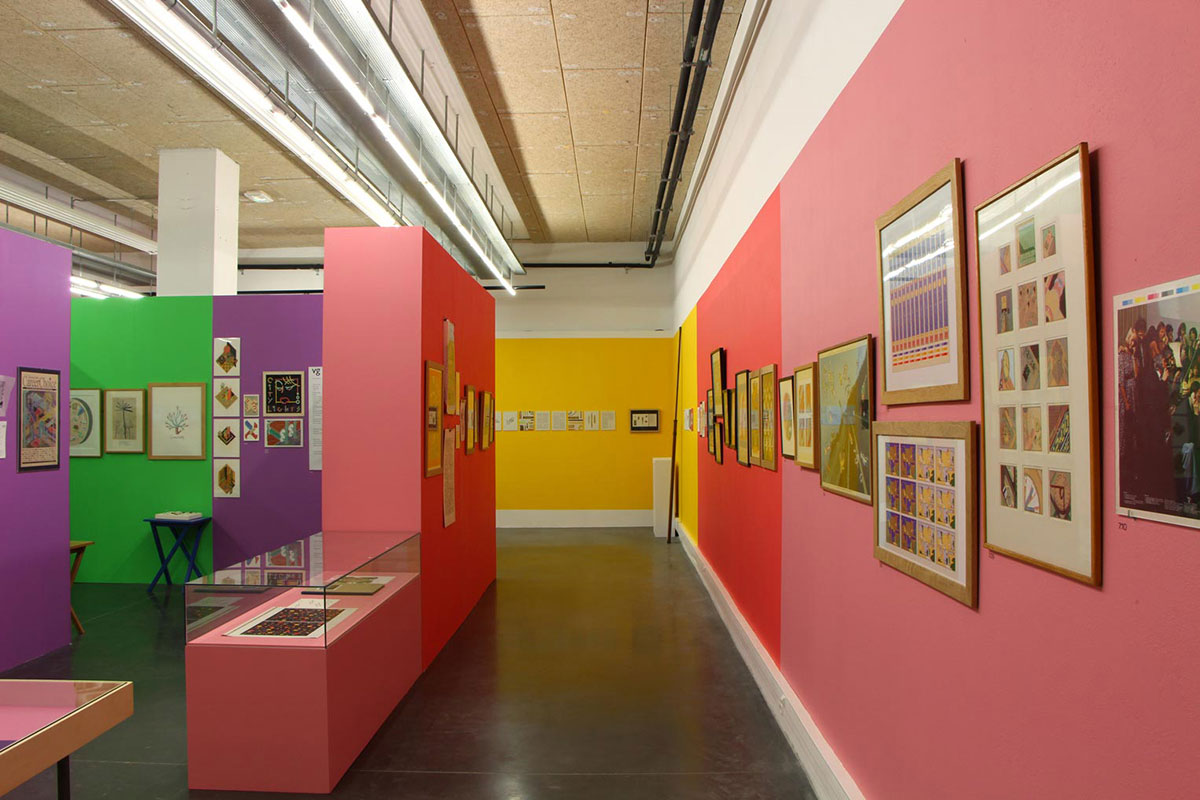 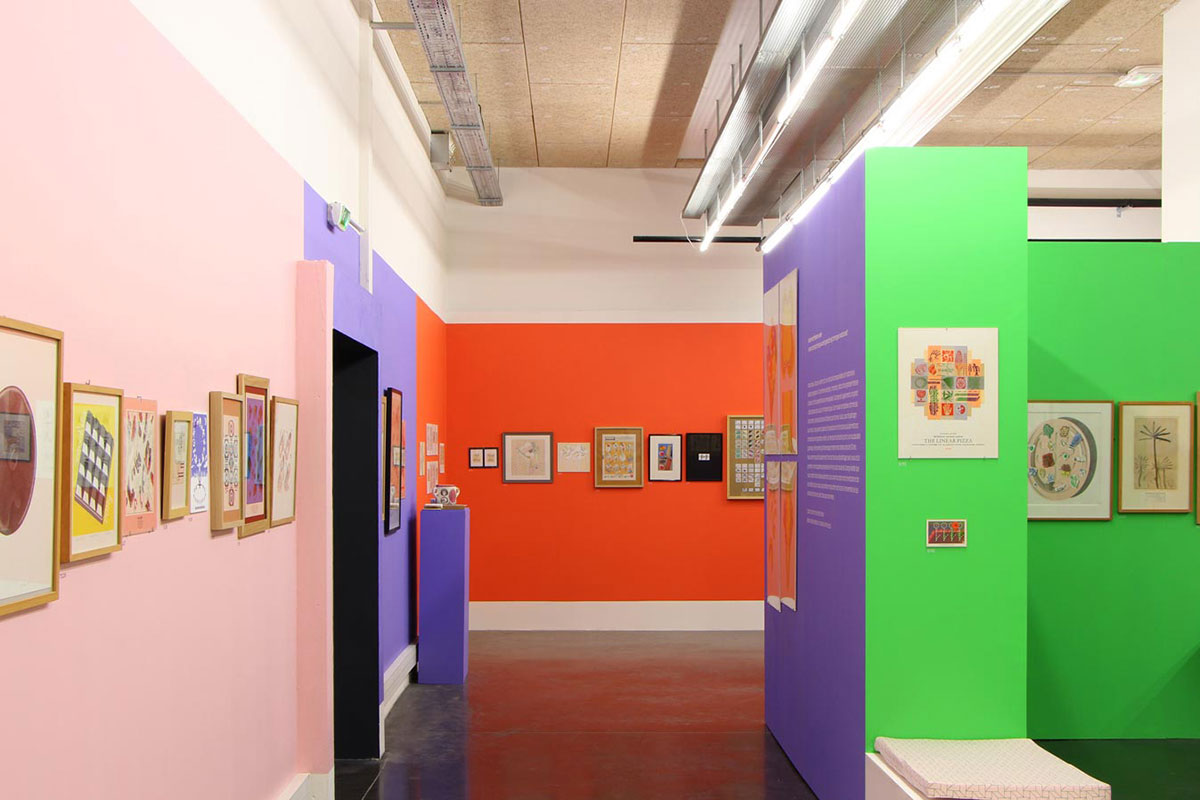 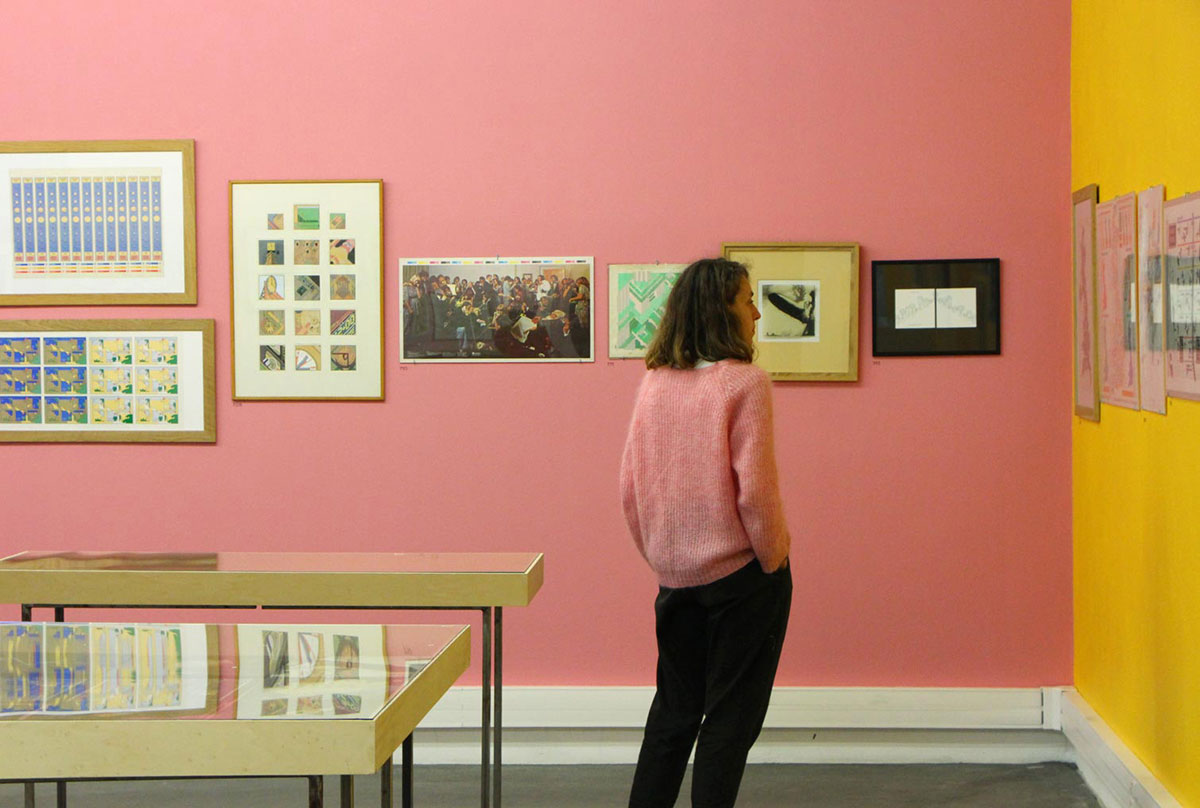 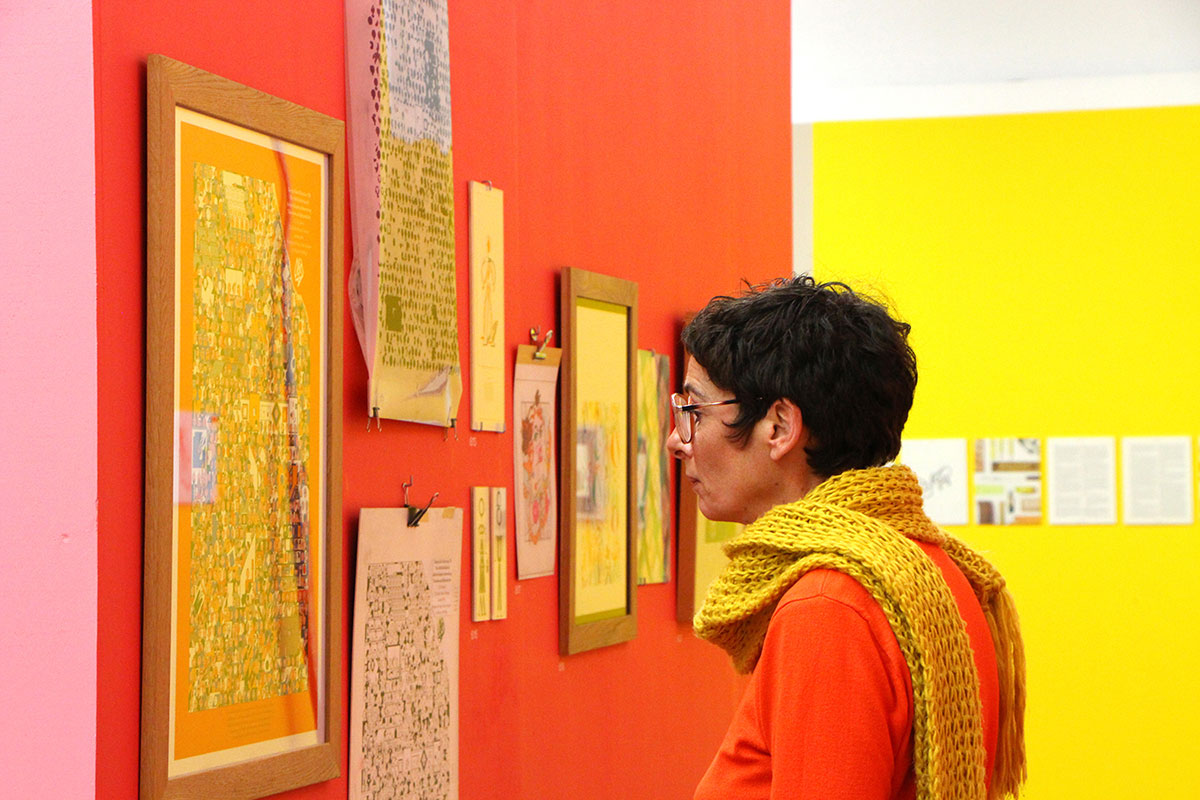 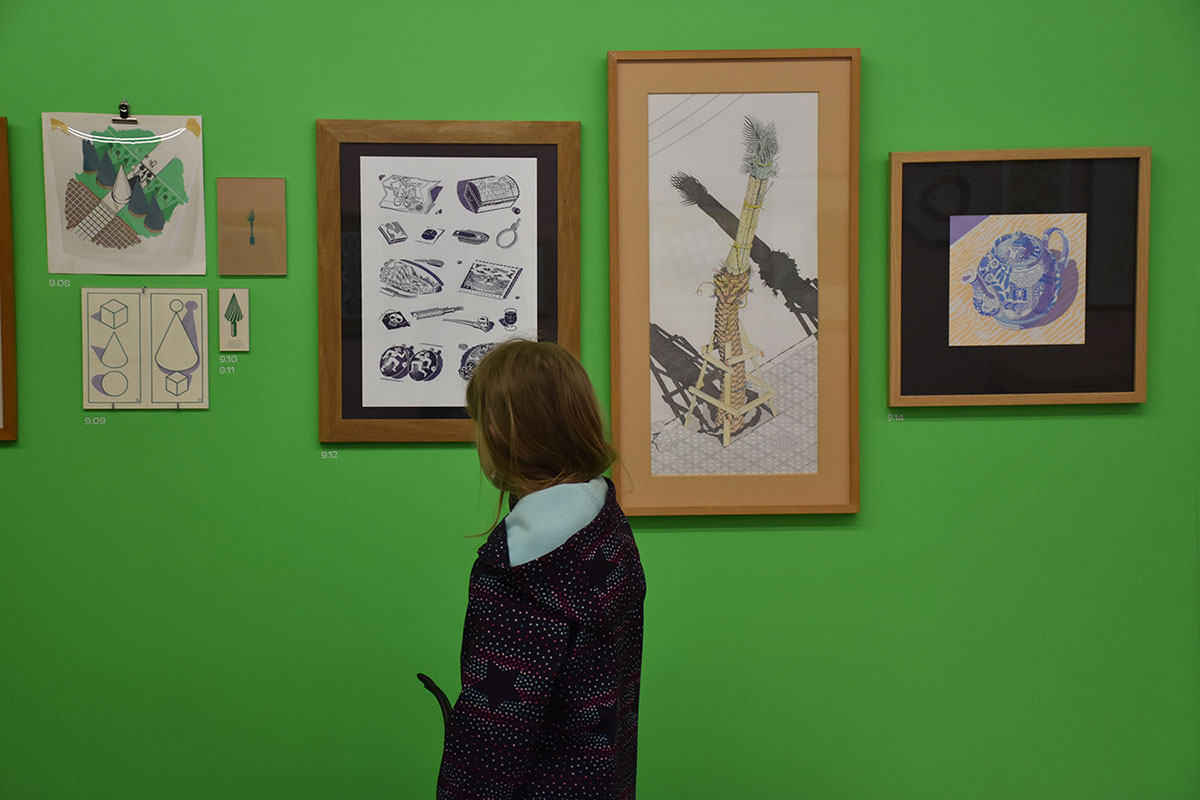 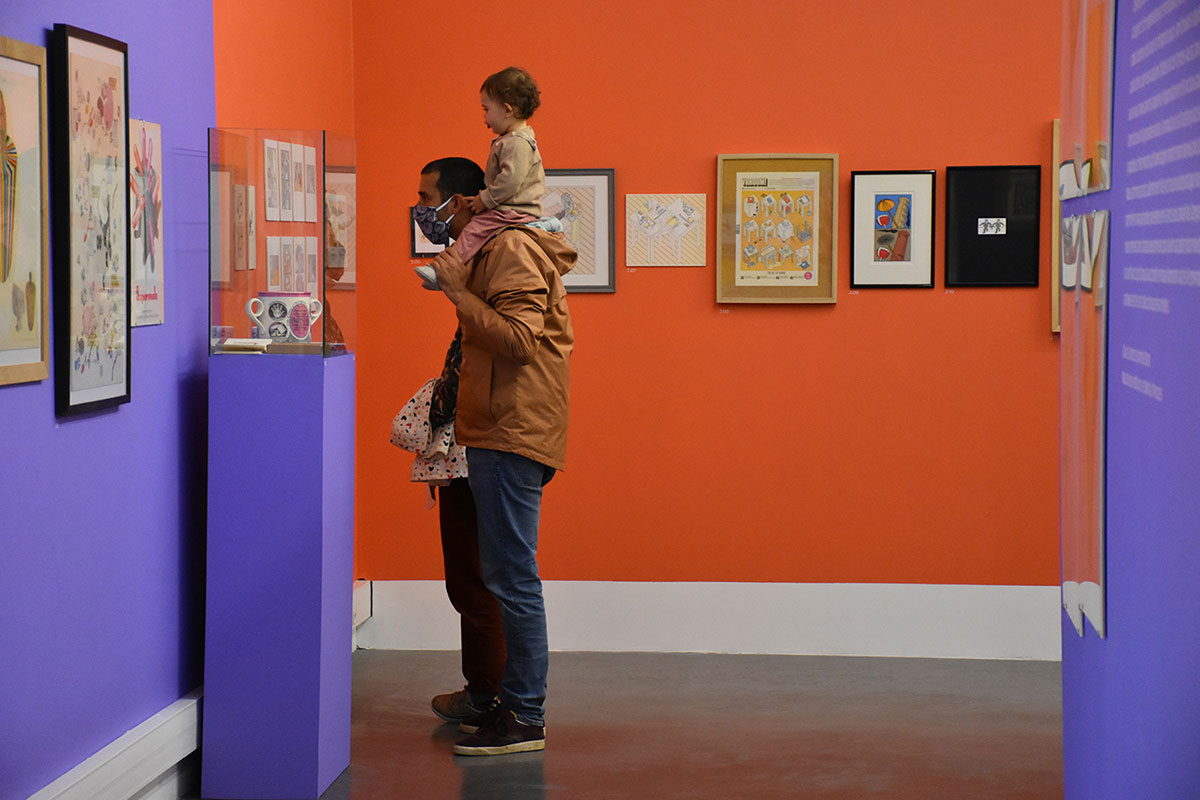