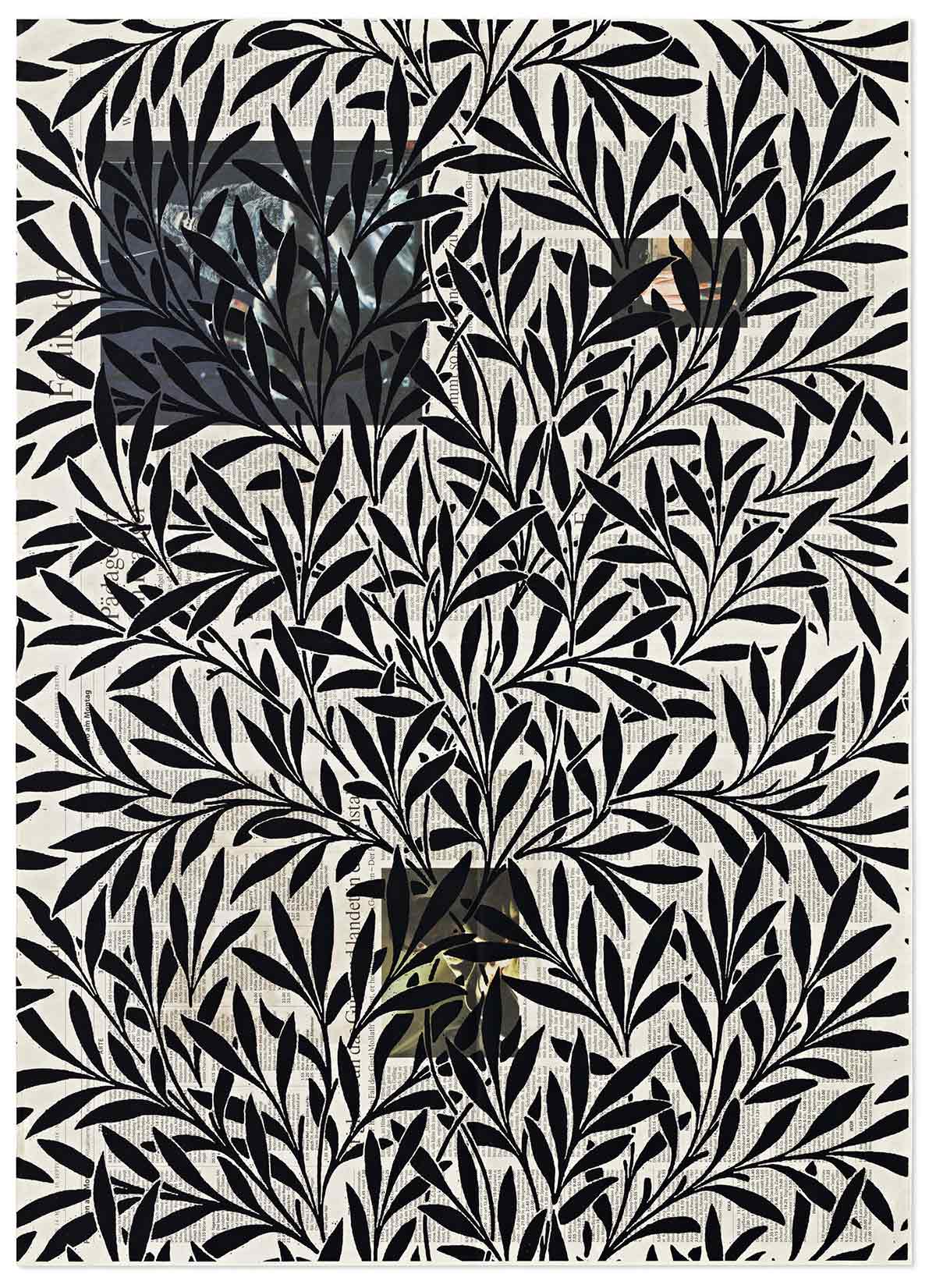 PULP is the title of a new body of work made by Patrick Thomas in response to the reality of living in an age of “truth decay.” Interacting with randomly sourced daily newsprint—the traditionally respected source of factual information—he layers found, drawn and codegenerated graphic forms in an aleatory way utilising the mechanical process of silkscreen printing. Intentionally ambiguous, the resulting prints may be appreciated for their abstract beauty and as a celebration of the disappearing broadsheet newspaper format; however, they might also conceal a darker significance that suggests manipulation, concealment and censorship. They are powerful graphic statements that document a moment in time whose aim is to ask more questions than provide answers, which, due to the unstable physical properties of the newsprint material, will continue to silently evolve over the years. Patrick Thomas (Liverpool, GB) is a graphic artist, who lives and works in Berlin and is a professor at Staatliche Akademie der Bildenden Künste Stuttgart.

Graphics as a political form of expression

“In light of the rise of both social media and right-wing populist movements, not only in Europe, the difference between truth and opinion seems to have become the object of negotiation in widespread political discussion. Underming facts in the name of political interest, raises not only the question of the appropriateness of political reactions but also the viability of the chosen media for political interventions. One of Patrick Thomas’ strengths is not only how he disintegrates the functional logic of graphic design in order to operate on the border between graphic art and social design. But rather how, in a politically precarious climate, the irreducible aesthetic forms expressed in his work pose the question of the role and function of graphic design within political negotiation itself.
In their layering of different graphic forms, his work not only plays with the semantics of surface and subsurface (for example, a version of his work ‘Empire,’ shows the barcode of Trump’s book ‘How to Get Rich’ printed on a title page of the FAZ, which could be read as a motif of capital logic within the political process, in tension, but also in continuity with, the agenda of this newspaper). Rather, this interplay is irreducibly tied to an aesthetic of surface and subsurface. The viewer’s gaze oscillates between an appreciation of the graphic form (which becomes an abysmal reminder of the practices of censorship) and the material of the newspaper. What is at stake always seems to exist in the perspective that the object offers us, which is not the one we are currently taking in. The aim of the exhibited works is not to develop concrete media formats and practices that steer political decision-making processes in a productive direction. But rather, as aesthetic objects and works of graphic art, they offer a medium of reflection and thus an education for the viewer.”
(Daniel Martin Feige, Professor of Philosophy and Aesthetics in the design department of the Staatliche Akademie der Bildenden Künste Stuttgart)

A———Z is a new space in Berlin with the mission of expanding the territory of graphic design by rethinking its limits and challenging traditional perceptions. At the storefront space, located in the heart of the city, renowned graphic designers will be invited to unfold their artistic, conceptual or formally experimental projects. 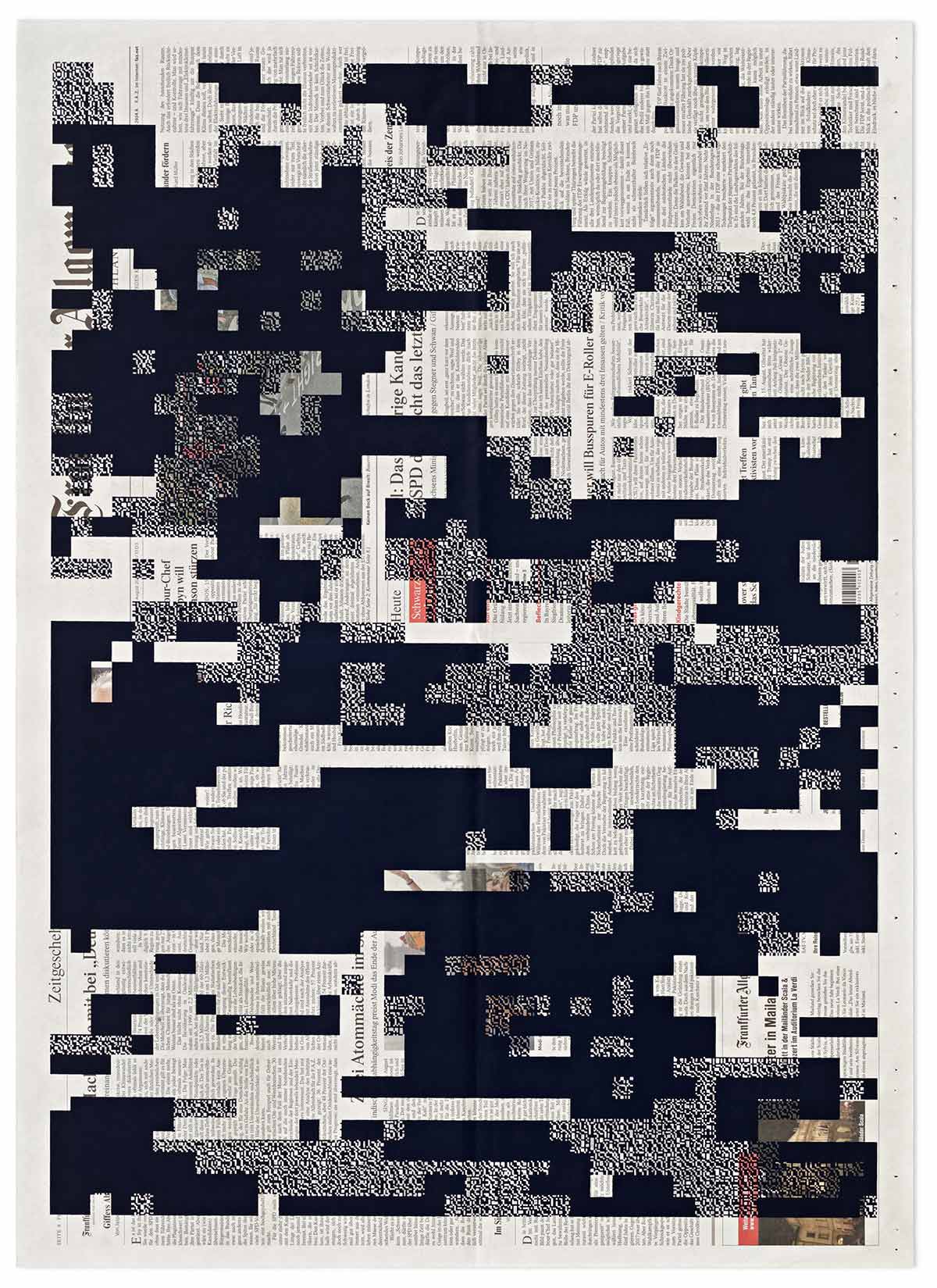 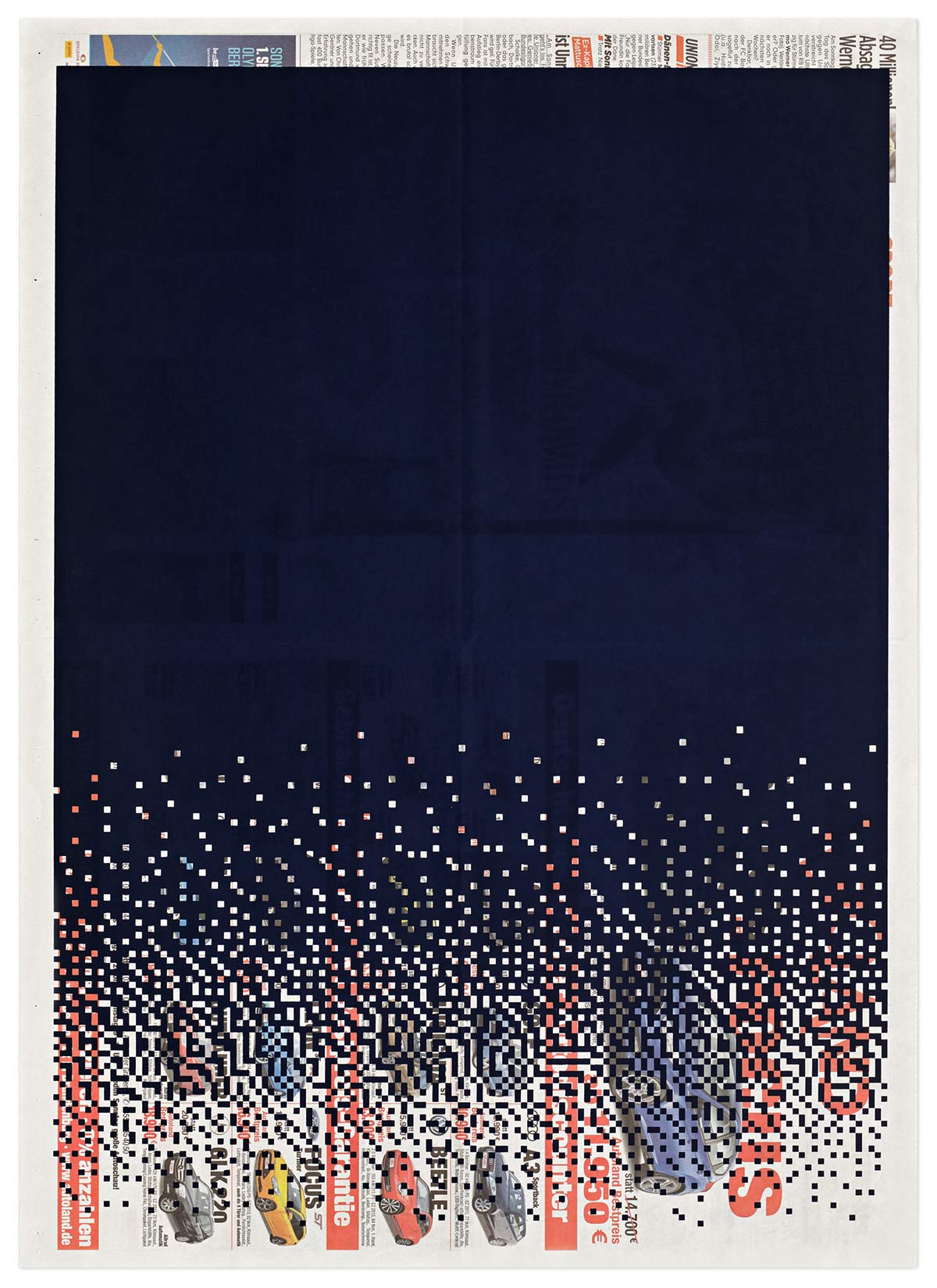 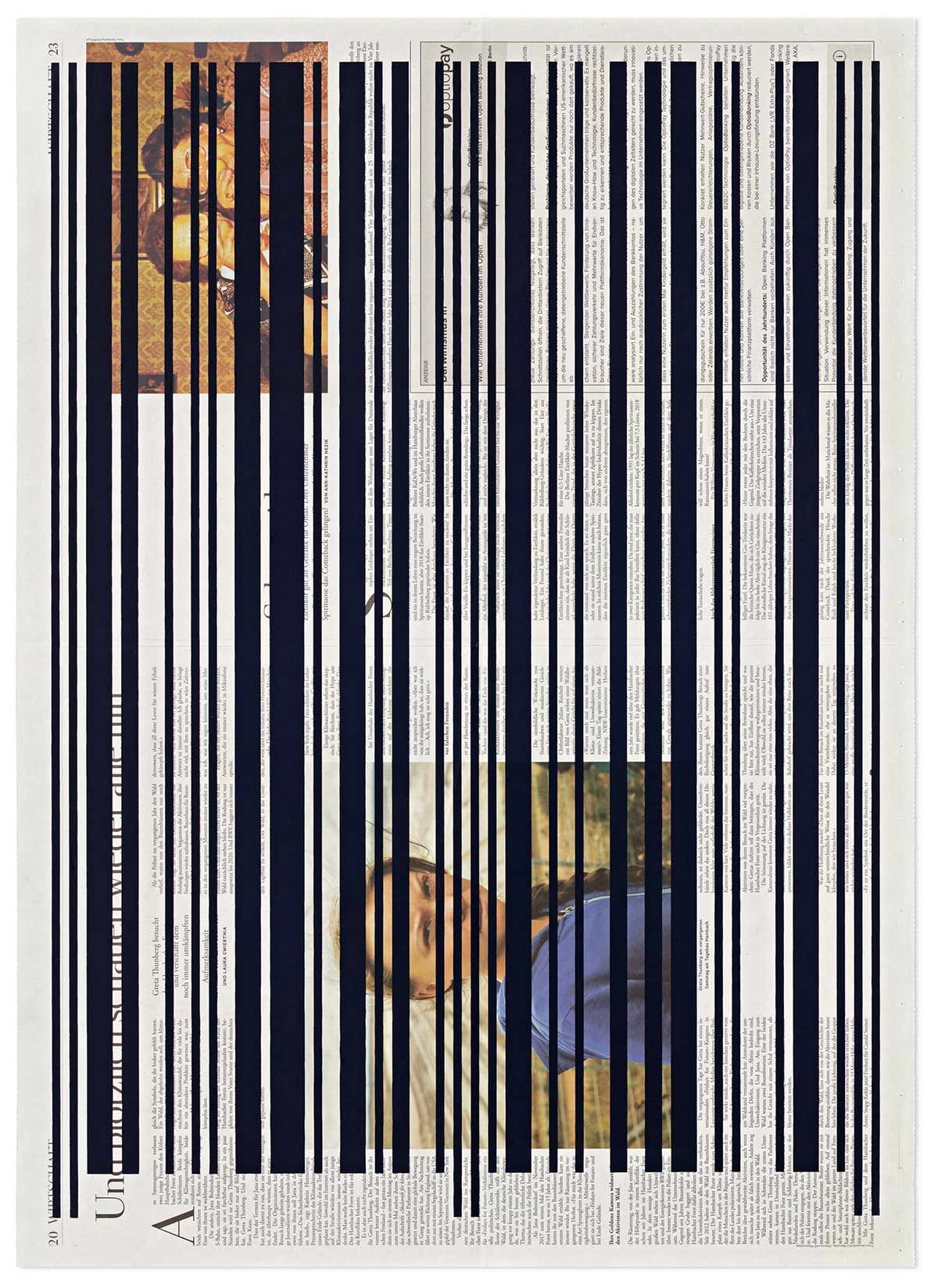 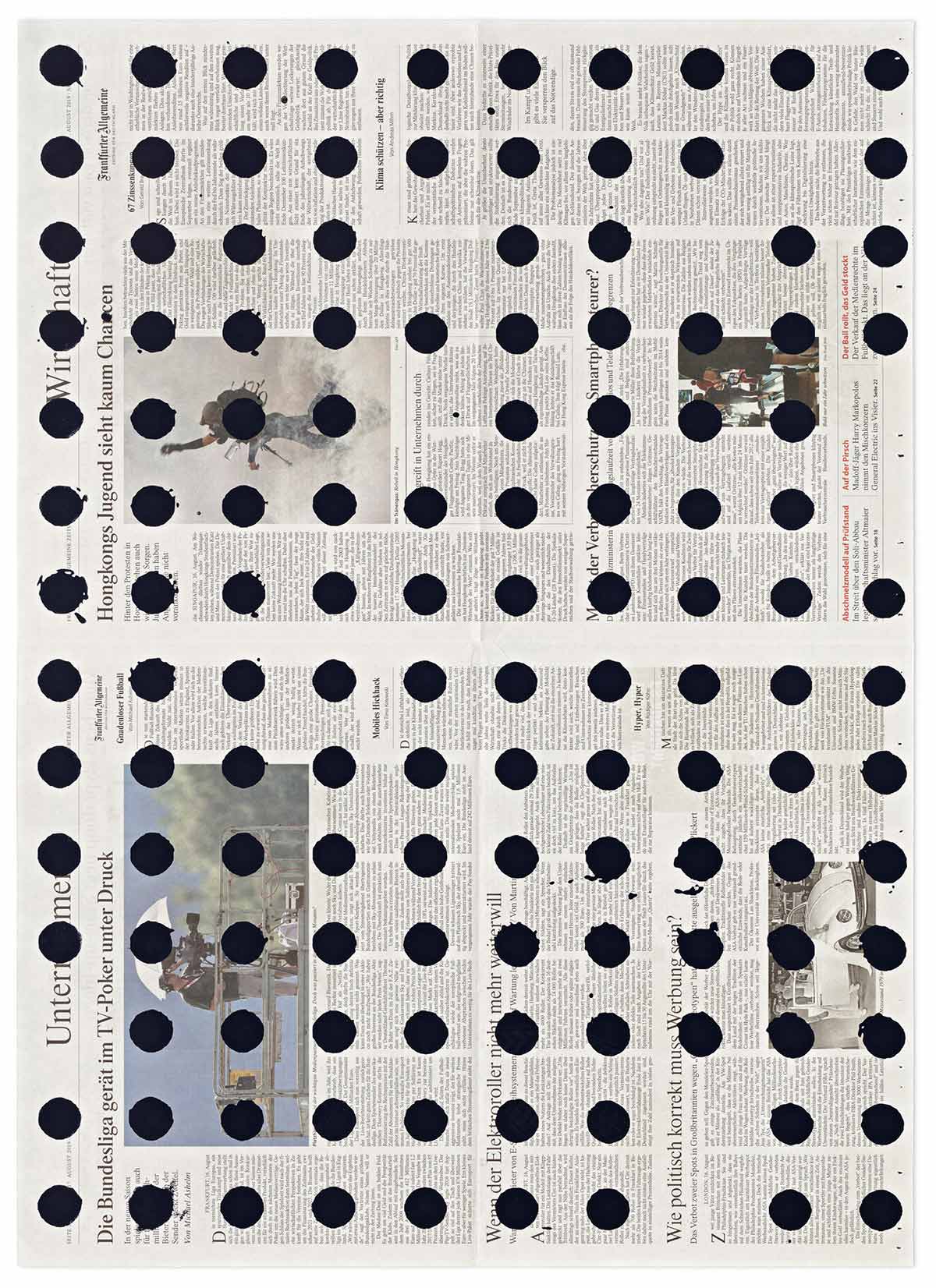