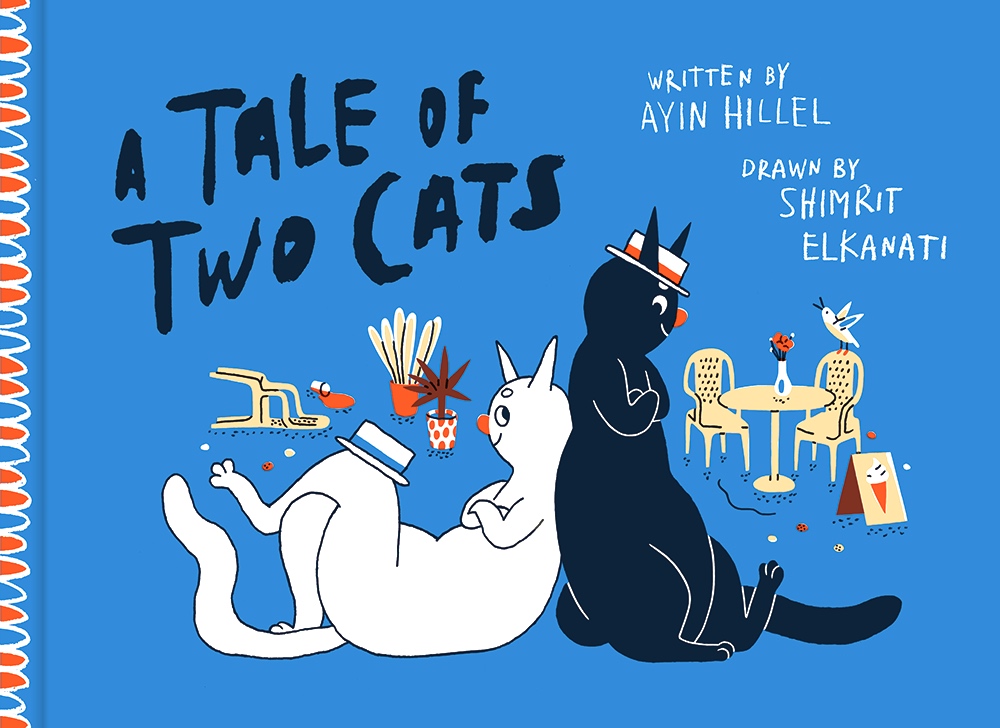 In this series with illustrators from Israel we have introduced you to the most exciting Israeli creatives in the fields of graphic design, animation and illustration. We have interviewed Rutu Modan, Amit Trainin and many others. One of the last artists we want to introduce to you in this series is the book illustrator and fun person Shimrit Elkanati.

Shimrit graduated from Shenkar College of Engineering, Design and Art in Ramat Gan, Israel. She works in children’s books illustration, digital animation and editorial illustration. One of her major creations is the children’s book A Tale of Two Cats, written by Ayin Hillel. After much success in Israel it appeard just now, in September, in English language at the independent comic publisher Fantagraphics Books. The story: Two cats, one black, one white, are squabbling over which one is prettier. One day, they jump into buckets of paint to change color and experience the other one’s life. It was first published in 2015 by Noah Books, a publishing project by well-known comic book illustrators Rutu Modan and Yirmi Pinkus to create contemporary comics for young children based on modern Hebrew literature. Yirmi said: “We wanted to work with young illustrators, certainly also with former students. In my opinion Shimrit is one of the greatest talents in the contemporary generation of Israeli illustration, and besides, she is a very fun person to work with.” Shimrit also works on assignment for The New York Times, takes part in group exhibitions in Israel and abroad and received an Honorable Mention from the Israel Museum Ben-Yitzhak Award for the Illustration of Children’s Books.

Where are you teaching right now?

For the past two years I’ve been teaching comics to school kids from the ages of 6-8. It’s sometimes challenging but a very rewarding experience. Comics is a great tool for telling stories and children sometimes draw more freely than they write so this comes naturally to them. Sometimes children share such great stories and it really stays with you and inspires you. There is also a lot of death and poop in their stories which they find hilarious, but I feel it’s all part of the process, so I let them go wild.

How was working with Yirmi Pinkus and Rutu Modan on A Tale of Two Cats?

Working with Yirmi and Rutu was a very unique experience. I have worked on other children’s books but it was different breaking down the visual elements of the A Tale of Two Cats with both of them because they are so “comics-driven”. They are the first editors I have worked with who are also illustrators, so the discussions were as much about line and composition as about the narrative.

Did you have to change the page layout for the English version?

Other than a few minor adjustments the illustrations have not changed. The Hebrew version had all handwritten typography, so I was working on redoing it in English which I enjoyed a lot.

Do you also work for advertising agencies or big companies?

Regarding work with large companies – I don’t know if I feel a difference in the way I approach projects for different clients. The briefs vary, I can get artistic freedom from a big company as much as from a small one. I do feel more invested in children’s books, I spend time working on each one because they are complex projects and also because I really love books. Still different is the work for the dance company I’ve worked with on a few large projects, the Inbal Pinto & Avshalom Pollak Dance Company. Working with them is close to a personal project because of the way they approach creation and collaboration.

In an interview with Yuval Saar, you have said that you enjoyed watching the dancers for developing your theater videos.

Music is a big inspiration for my work, from that comes the love of movement and rhythm. Just before working on A Tale of Two Cats I worked on a production called Dust, with the Inbal Pinto and Avshalom Pollak Dance Company. I spent a lot of time observing rehearsals and fell in love with the dancers, as I am sure anyone would who spends time with dancers. Working on the book I looked for a dance reference for the cats to style their shape and movement and came upon a classic performance by Gene Kelly and Fred Astaire, two “cats” who act out a love/hate relationship. They became the main inspiration for the characters, I even used their hats. I believe dance and movement influence all of my work, it helps me the most with expressions of mood and reactions.

Is there an illustrator you would like to express gratitude for?

Tomi Ungerer, who passed away recently, is a big inspiration. There is something wild, hilarious and scary in his children’s books, this uncontrollable ride that is somehow put into book form with genius compositions and lively characters. Can anyone imagine a more lovable snake than Crictor? Or a better friend than Emil? I would be content for Tomi to just be a brilliant illustrator, but he is also a great storyteller, and the best part is that my 4-year-old son loves his stories as much as I do.

The children’s book A Tale of Two Cats is available at Fantagraphics. 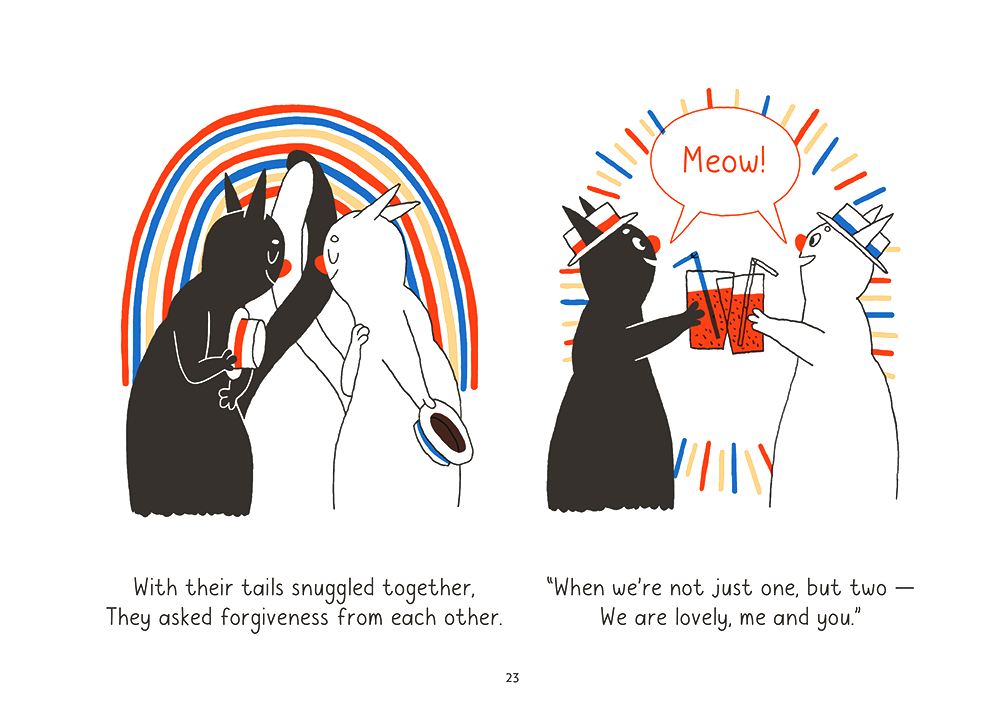 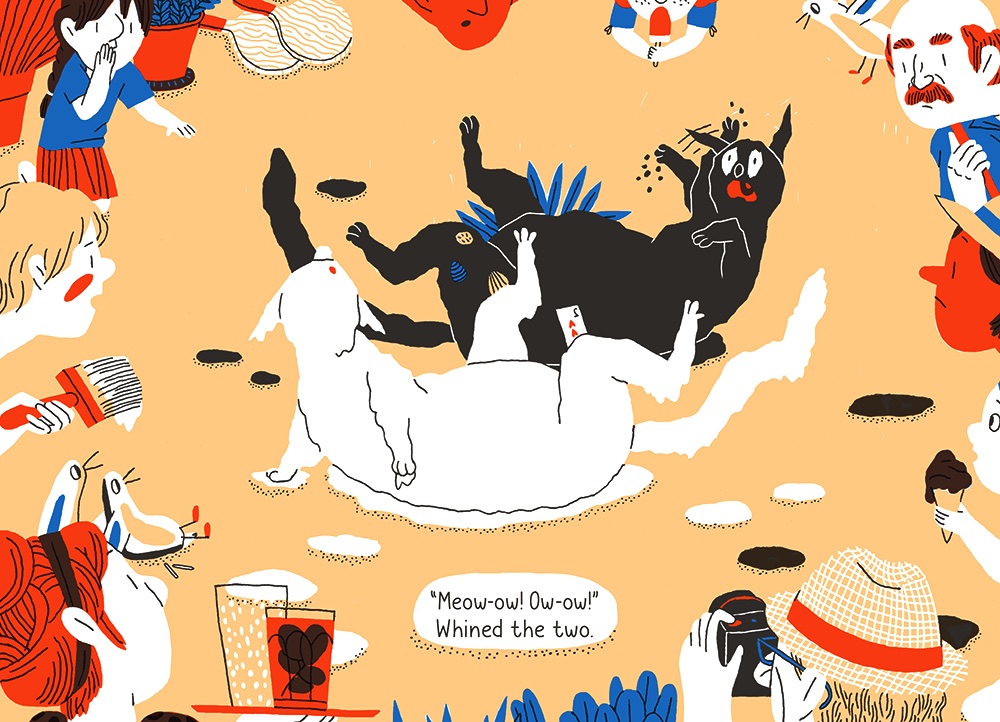 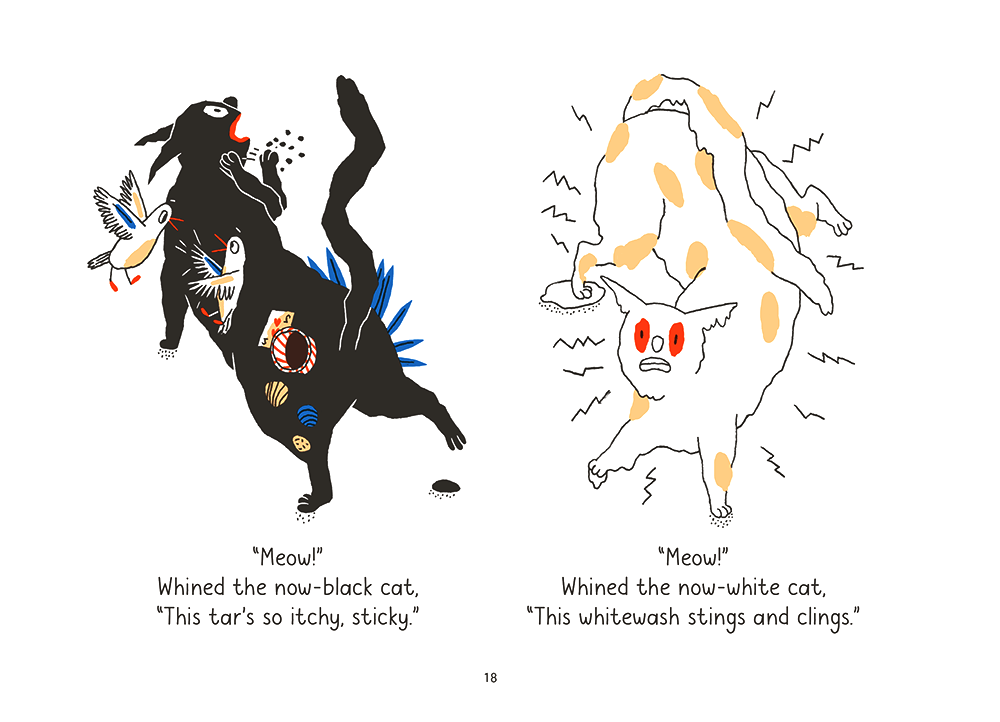 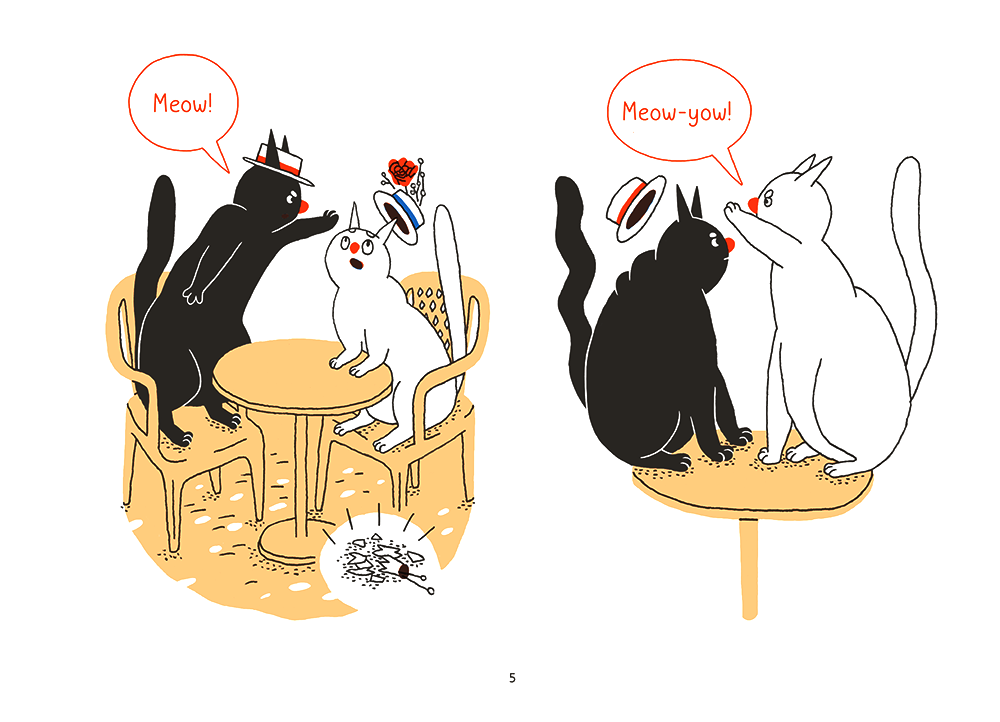 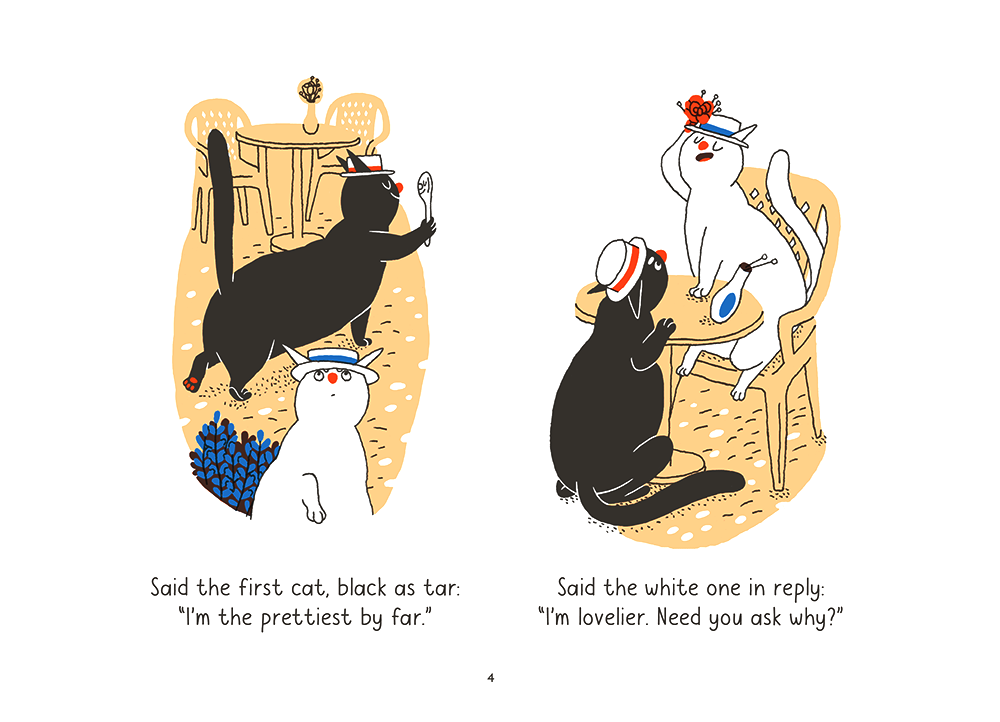 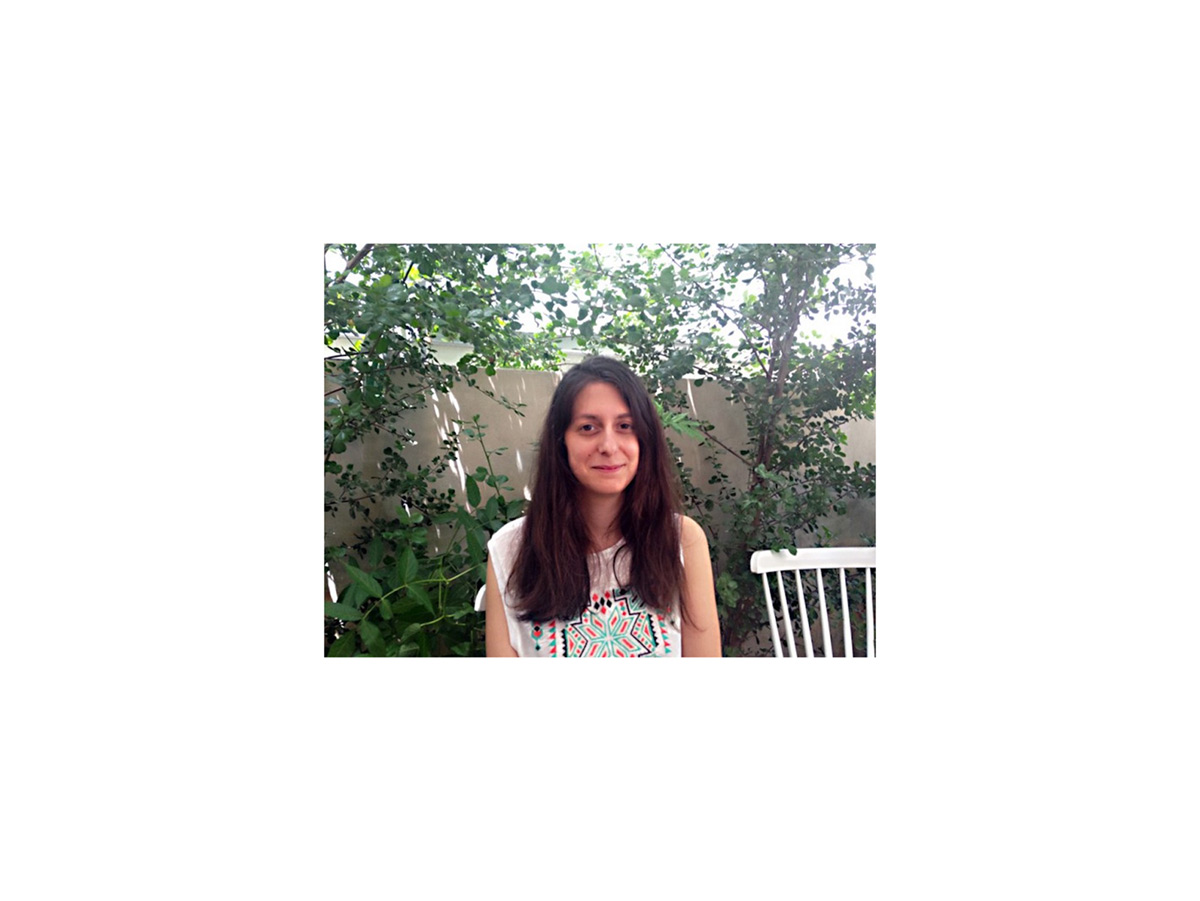 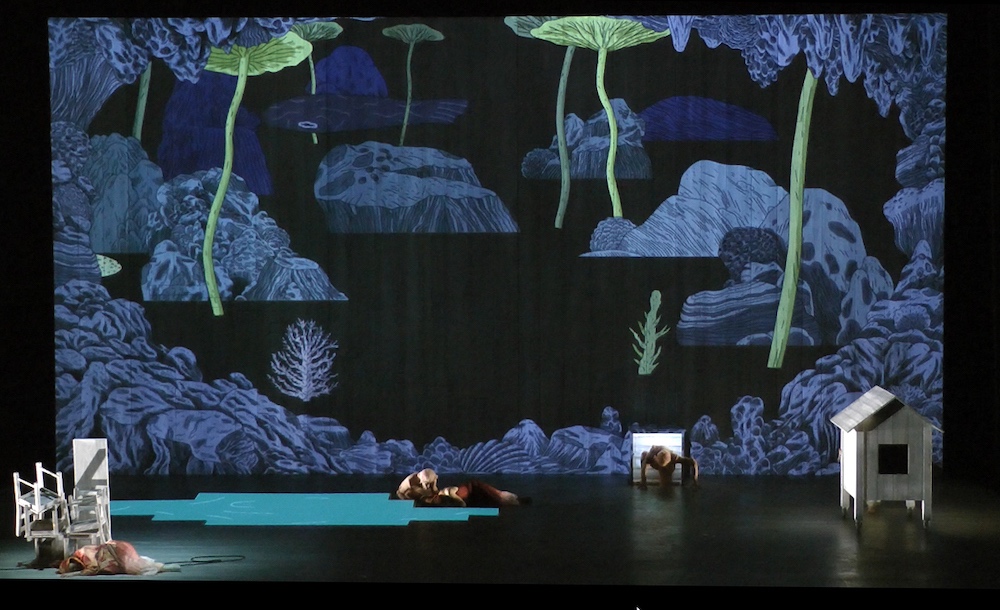