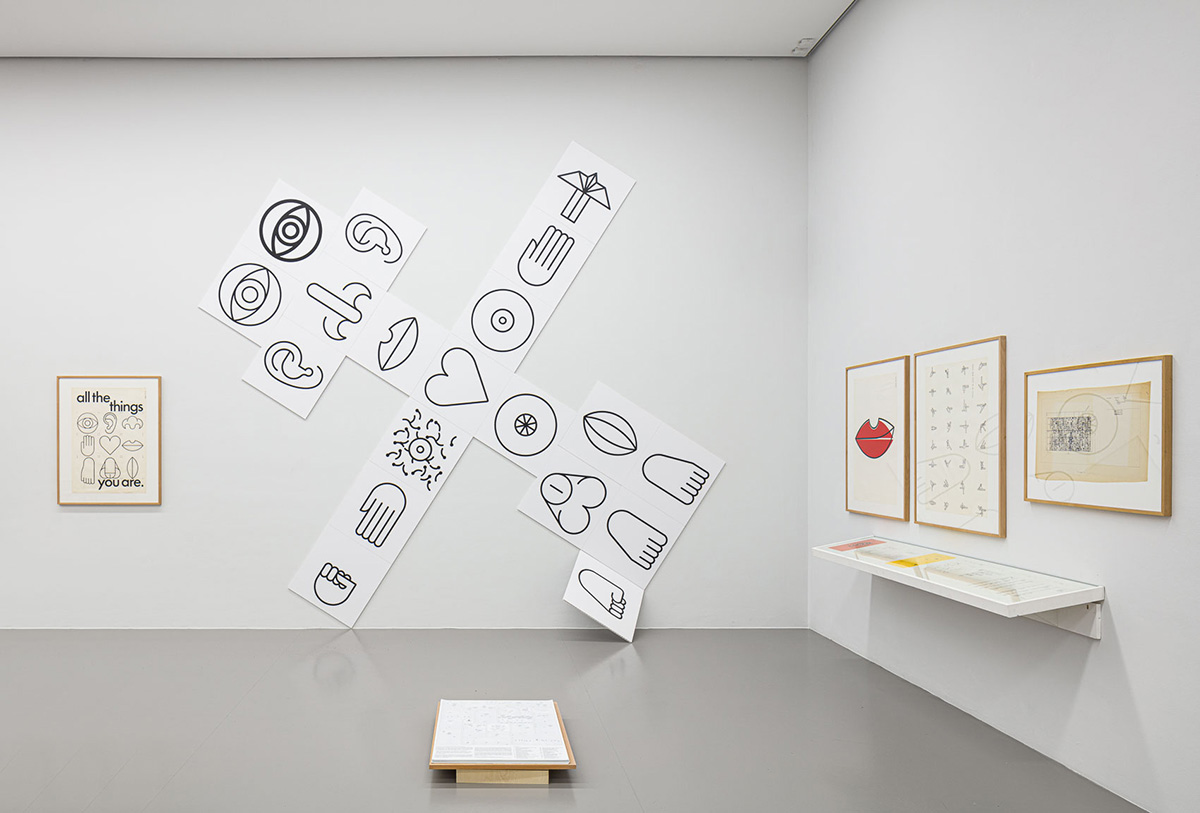 Pictograms, Signs of Life, Emojis: The Society of Signs

This event is a digital evening of lectures in conjunction with the exhibition Pictograms, Signs of Life, Emojis: The Society of Signs at Leopold-Hoesch-Museum in Düren and Museum of Modern Art Freiburg. The digital lecture evening starts with an introduction to the content and design of the exhibition and publication project Pictograms, Signs of Life, Emojis: The Society of Signs. All lectures will be held in German for free on Zoom. In the planned lectures, five designers and artists will provide insight into their work and research on the pictorial sign languages on display. At the end, questions can be asked and the exchange about the project can turn into an open dialog with all participants.

The second part of the exhibition explores the development and reorientation of signs, starting with an artistic work of Harun Farocki and the infamous pictograms by Otl Aicher for the Summer Olympics Munich in 1972. These infographics and pictograms communicate without written language, a more radical attempt is to fully replace written language with an image language. The LoCoS language by Yukio Ota is easy to learn and has the goal to bridge global communication, while the artistic work of Pati Hill, Proposal for a Universal Language of Symbols, is inspired by pictographs invented by her bilingual daughter who, as a child, struggled with the grammar of English and French. Warja Lavater transformed fairy-tales into symbolic landscapes and Wolfgang Schmidt’s Signs of Life anchor the exhibition with a gigantic figure looking over the scene.

A third section of the exhibition contains different research and artistic positions including the Genesis of Juli Gudehus and Timothée Ingen-Housz’ Elephant’s Memory. This Open Emoji Research is separated from the rest of the exhibition by DOCOMO’s basic set of Emoji designed by Shigetaka Kurita in 1999 and is reflected with a voting-booth for Lilian Stolk’s Emoji-Voter. Ilka Helmig and Johannes Bergerhausen present a rich table of their own works and some highlights of their collection. Edgar Walthert compiled a “memory” of symbol-fonts, pictograms and icon-systems, that invites visitors to play and build sentences with. Next to this are two folders which include his comparative symbol research. In an extra room, the visitor is invited to take a seat inside the palm of a gigantic yellow hand and play around with the Signs of Life by Wolfgang Schmidt. This multimedia installation is created by the artists collective Gruppo-Due, consisting of Mortiz Appich, Jonas Grünwald, and Bruno Jacoby.

A Digital Evening of Lectures

What?
A digital evening of lectures in conjunction with the exhibition Pictograms, Signs of Life, Emojis: The Society of Signs at Leopold-Hoesch-Museum in Düren and Museum of Modern Art Freiburg.
All lectures will be held in German. Free admission. On the Platform: Zoom.
More information

After this event, the virtual exhibition will be launched at Die Gesellschaft der Zeichen

The exhibition takes place at Leopold-Hoesch-Museum, Düren until April 11th, 2021, and from May 6th, 2021, at Museum of Modern Art, Freiburg. 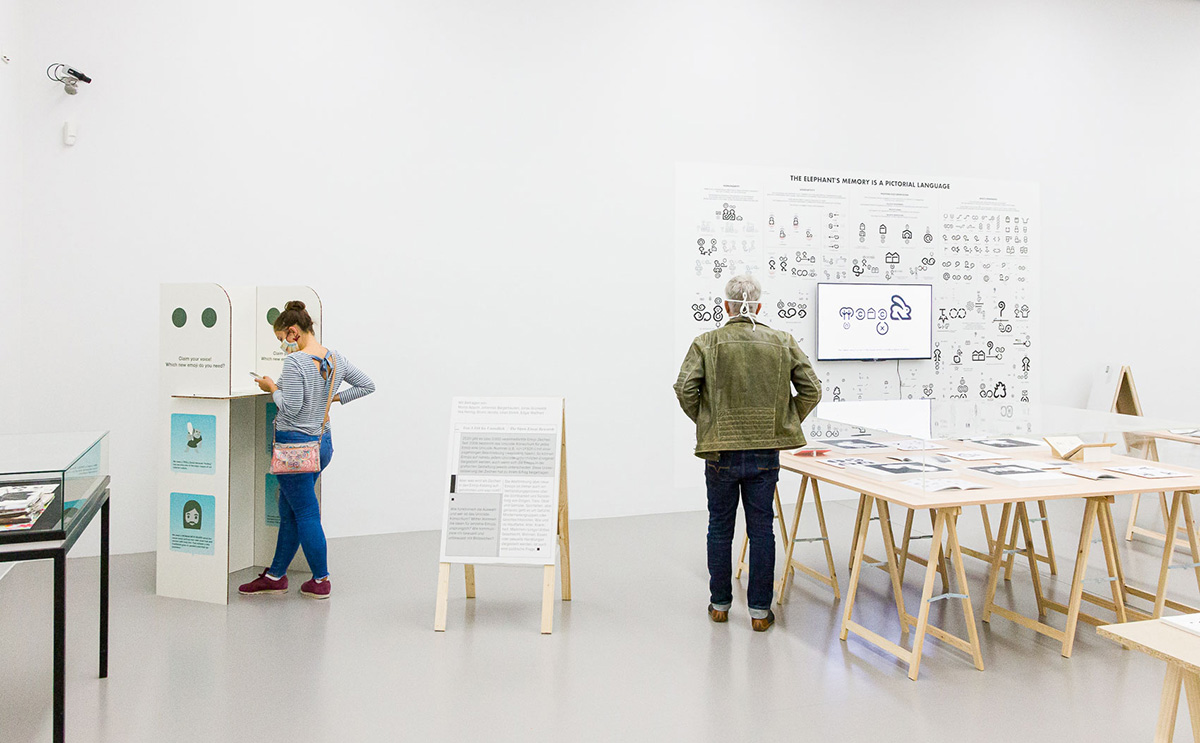 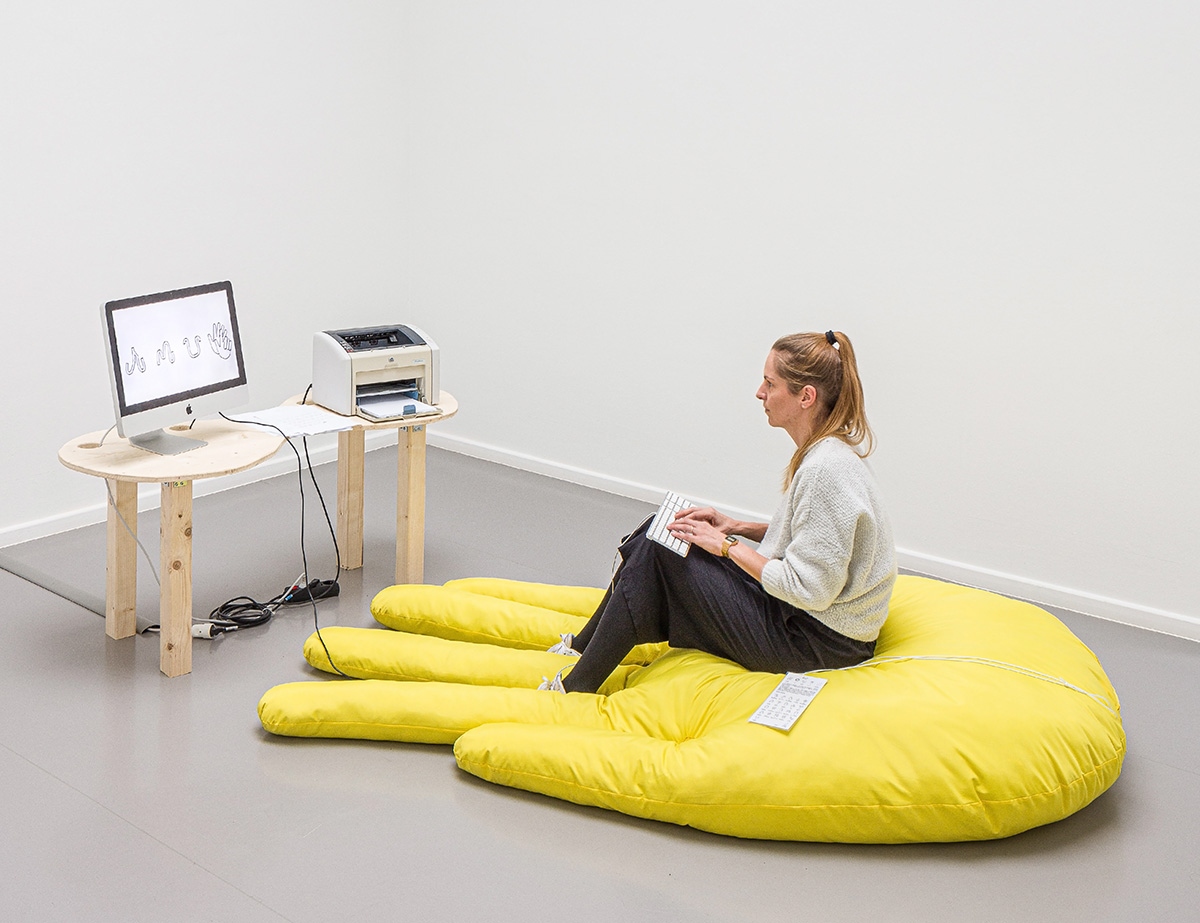 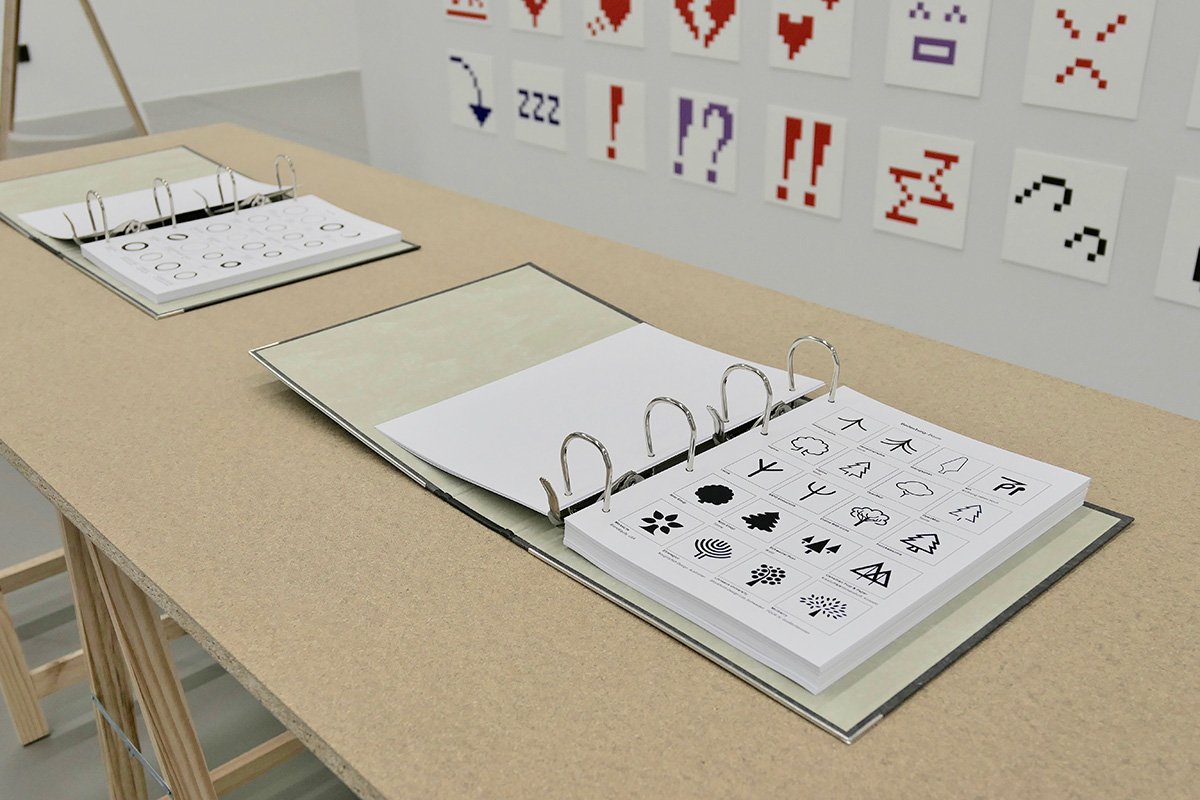 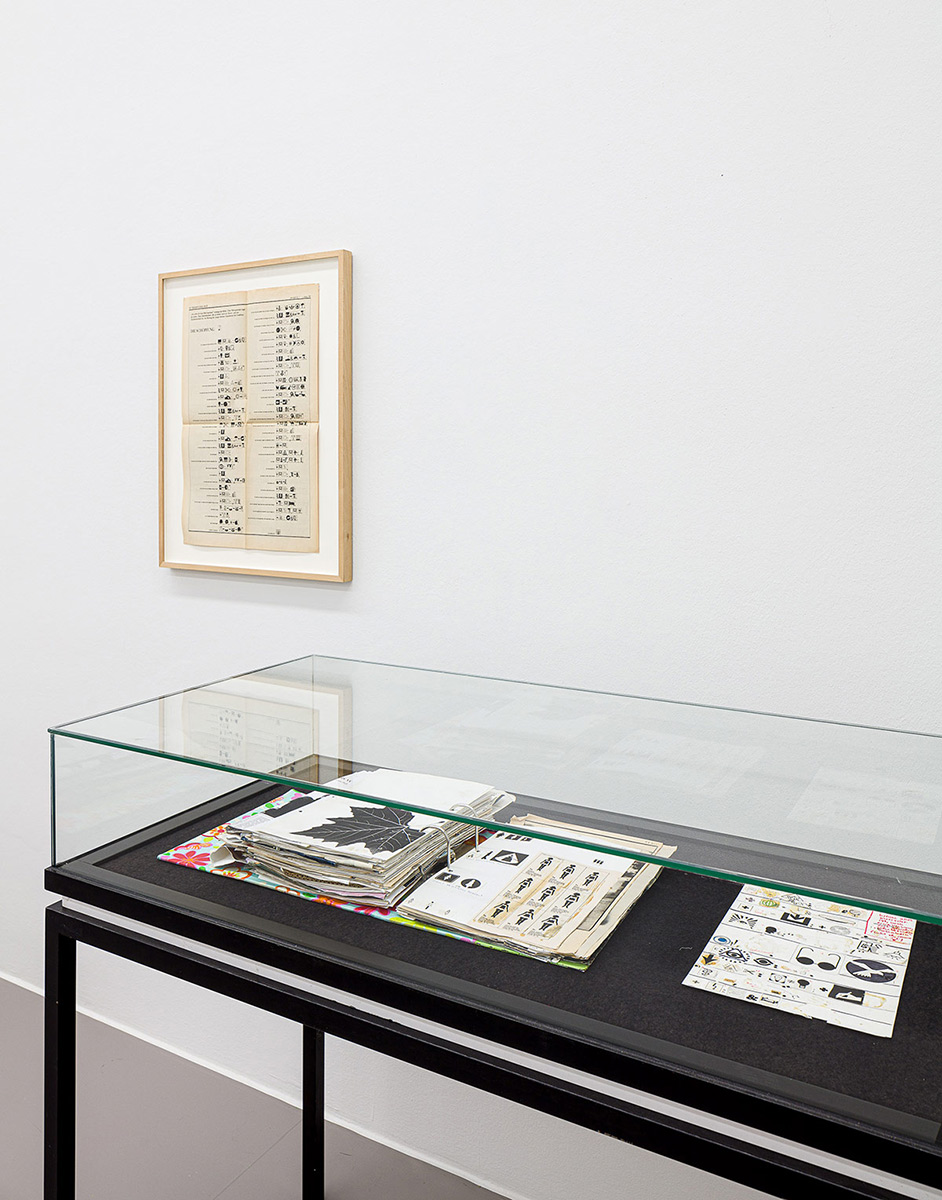 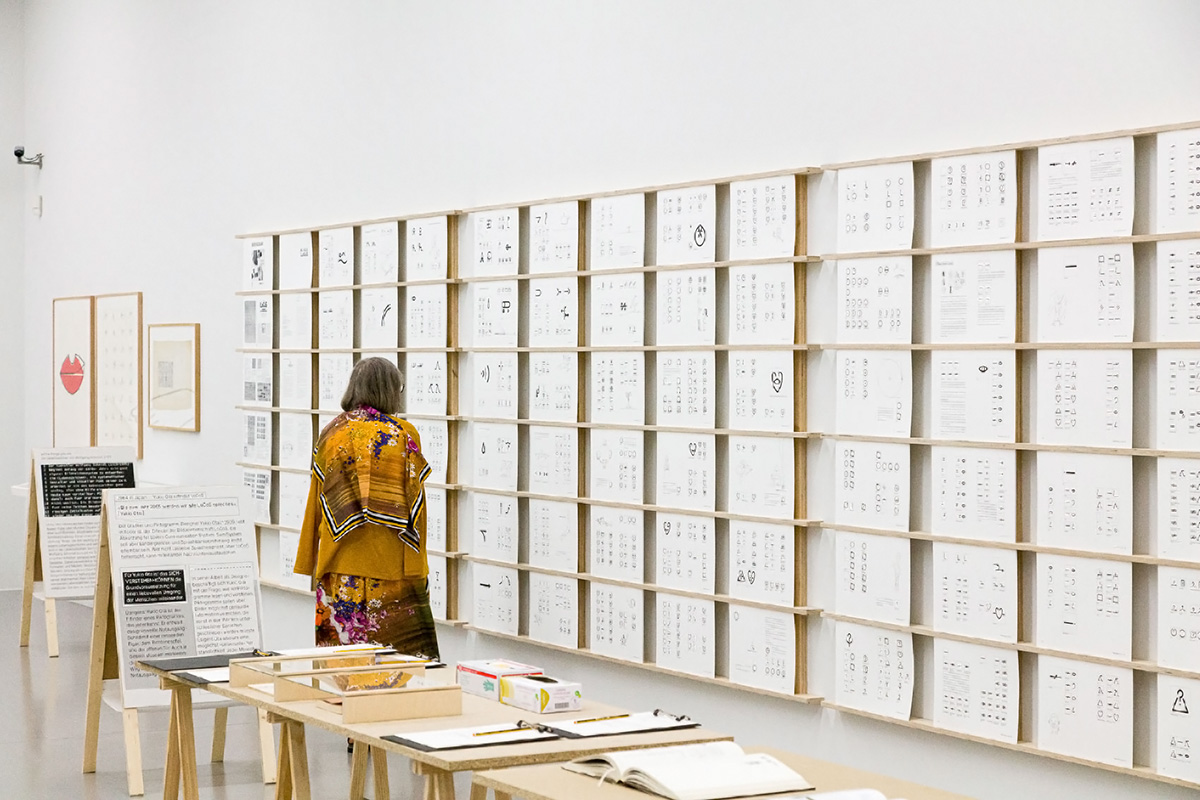 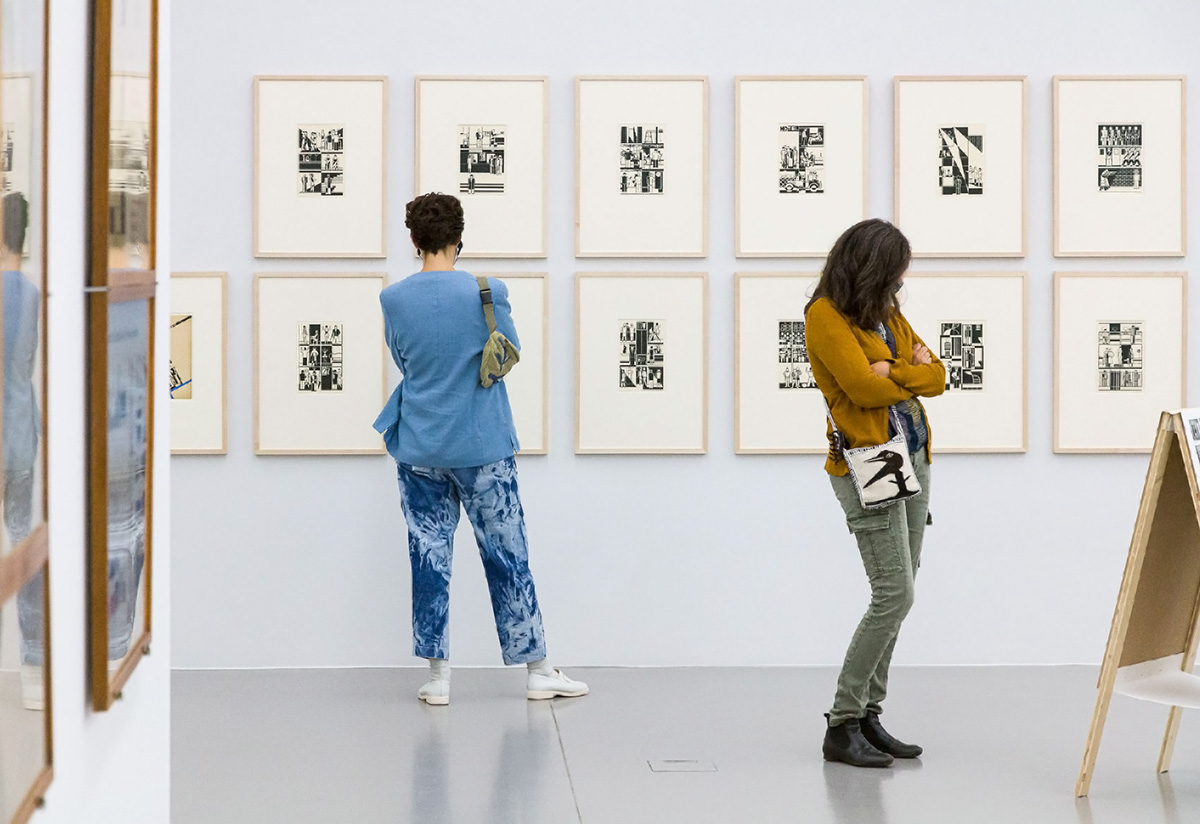 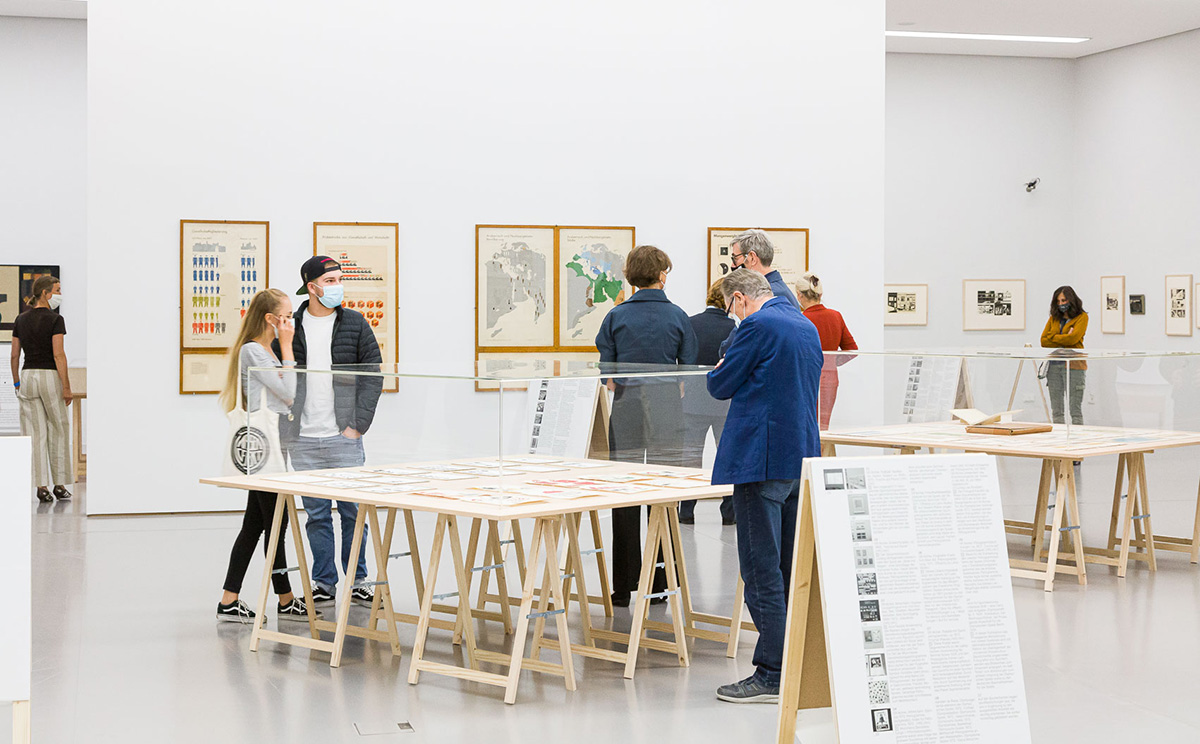 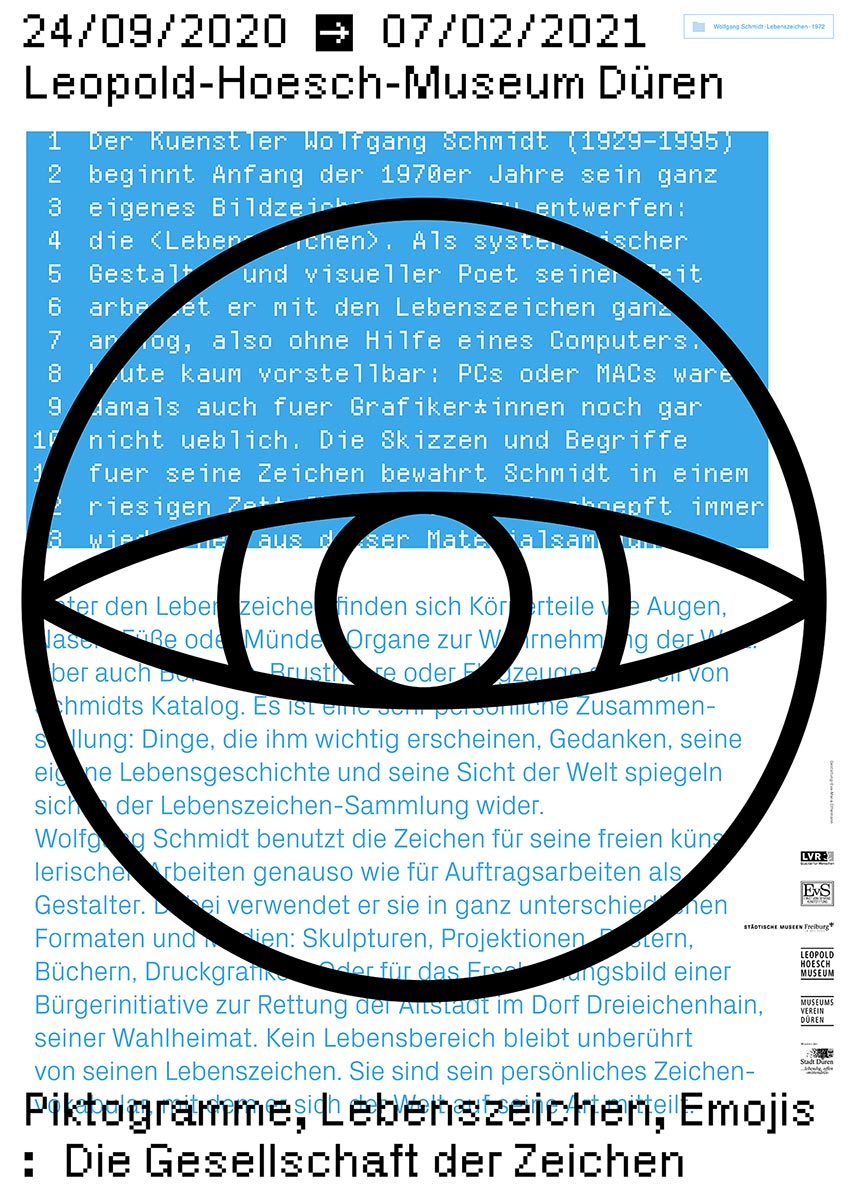