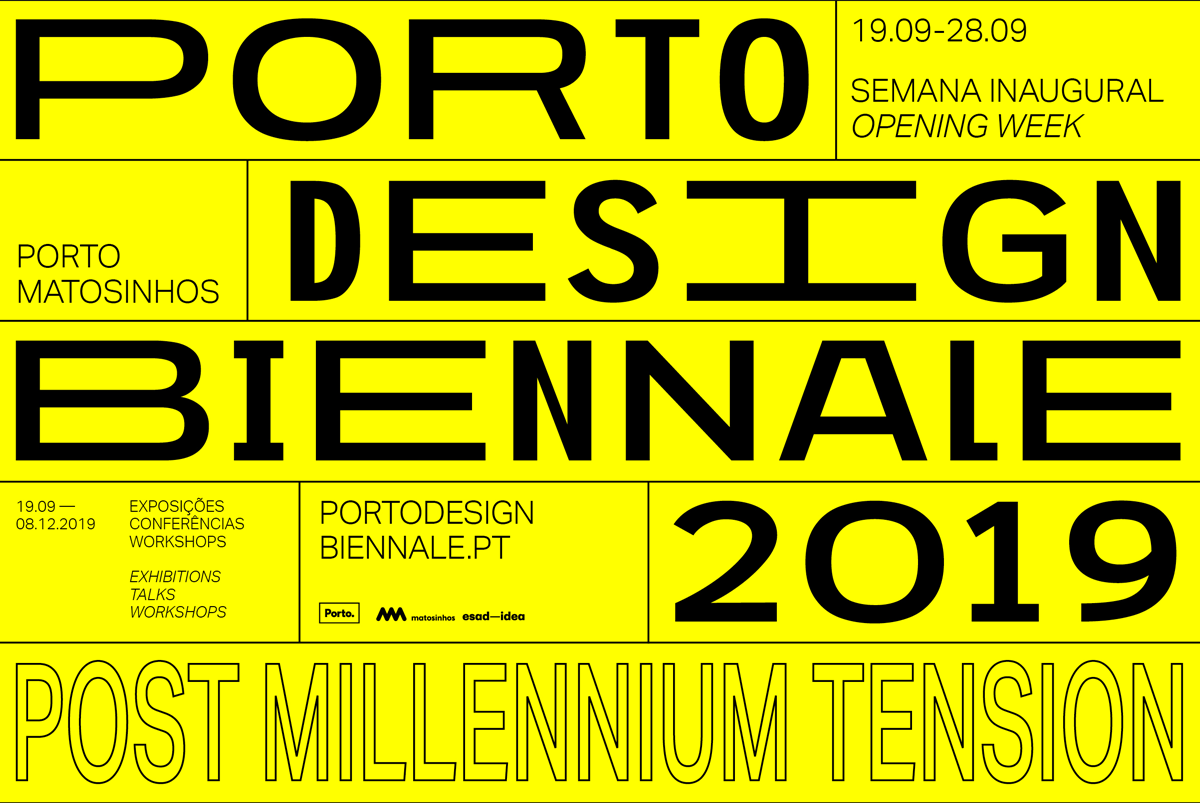 Author: This is Ground Control

Porto Design Biennale intends to promote, revitalize and internationalize the thinking and practice in design. The first edition will take place between September and December 2019 in several locations of Matosinhos and Porto. Please find the full program here.

From September 19th until 28th, 2019, the Porto Design Biennale 2019 opening week will take place in several galleries and locations all over the creative hotspot towns Matosinhos and Porto. Please find the full program including exhibitions, workshops, and lectures here.

To speak of new millennium tensions is to enunciate a diffuse picture of change and conflict. Change presupposes a change in a state of things; relative to the final decade of the 20th century, the ongoing changes are profound and affect the forms of production and consumption, representation and communication, mediation and participation. Conflict presupposes a confrontation between opposing positions.

The identification of changes and conflicts is confronted with the difficulty of objectifying and interpreting complex, ongoing processes. It is also important to go beyond the identification of problems and come up with proposals for solutions. In the context of this complex framework of tensions, how will design be affected? How do design practice and theory react to this conjuncture of change and conflict? How do you update design to be socially current? How appropriate are research and teaching in design? How is the discipline of design projected and what realizable utopias does it project today in the search for a better world?

At the beginning of the 21st century, Canadian designer Bruce Mau confronted designers with the following question: Now that we can do anything what will we do? In a context of increasing technological availability and new social, environmental and political emergencies, critical design practice should not be guided by what can be done but by what needs to be done, assuming responsibility and ethical awareness. According to Dunne & Raby, the “shift from thinking about applications to implications creates new roles, contexts and methods.”

Confronting the tensions of the new millennium, the first edition of Porto Design seeks to analyse the current disciplinary configuration of design. The reflection on the one hand takes into account the historical perspective and tension relationships, between remoteness and closeness, contemporary design and the model of modern design that was in effect until the end of the millennium; on the other hand, it is important to identify and evaluate the forms and functions of design produced in the first two decades of the current millennium, as well as to reflect on the social efficiency of design and the new connections that arise from the economic, technological, political, cultural, and environmental situations.

The millennium shift coincided with a deep, broad and diversified picture of structural and cyclical changes that have largely redefined the world we live in. moving in a changing world has become a central challenge to critical thinking, and in this context, the epistemological framework of design has also changed, giving rise to new ideas, models and processes of intervention (in the material field), exploration (in the relational field) and resistance (in the ideological field).

Close attention will be focused on the millennial designers, reflecting on what might characterize and differentiate a generation that is educated and integrated into the labour market in shifting circumstances, marked by new geopolitical scenarios, web 3.0 power, political rhetoric, the neoliberal crisis, the financial sector crisis, the ubiquity of terrorism and the proliferation of new forms of diffuse threat, the spread of open source culture, the predominance of the prosumer, the reconfiguration of forms of production and the appreciation of participation, co-production, immaterial production, critical thinking, and collective action.

Maybe design thinking has never been as focused on issues of identity as it has in the last 20 years. the crisis of dominant financial and political models has elicited a reflexive demand for a radical, authentic, honest identity that Jason Moore has identified with the emergence of a new “ontological policy,” i. e. a broad, radical reconfiguration of values. We believe that this reconfiguration appears to be current and pertinent to contemporary design. Raised by these critical premises, the core porto Design Biennale program will focus on the development of three programmatic axes:
– Present Tense focuses on Portuguese design in the new millennium, aiming at surveying a multiform professional practice. issues that are recurrently debated in the context of Portuguese design, such as the connection with industry, the intersection between design and craftsmanship, auteur design and design as a freelance profession, must be replaced within a real context where all these dimensions have changed.
– Design Forum stems from the thematization and problematization of the central theme of the Biennale. It is a question of weaving a critical map of post-millennium tensions and reflecting, on the one hand, specificities of disciplinary characterization and, on the other, working lines of intersection, conflict, confluence or consequence between design, other disciplinary domains and political, financial, technological and cultural aspects.
– Design and Democracy will focus on the political context of design, and above all on a reflection on possible modes of relationship between Design and Democracy. the practice of design has been understood throughout history as a socially effective activity, which has consolidated in recent decades expressions of greater activism, argument and resistance; At the same time, projects of inclusion, dialogue and democracy have increased in number and relevance, complemented by discourses of a fictional or speculative nature that remind us of the central function of design in the realization of realistic utopias that contribute to the creation of a better world. José Bártolo, Chief Curator Porto Design Biennale—post millennium tension

When?
September to December 2019

Where?
Several locations in Matosinhos and Porto
Portugal