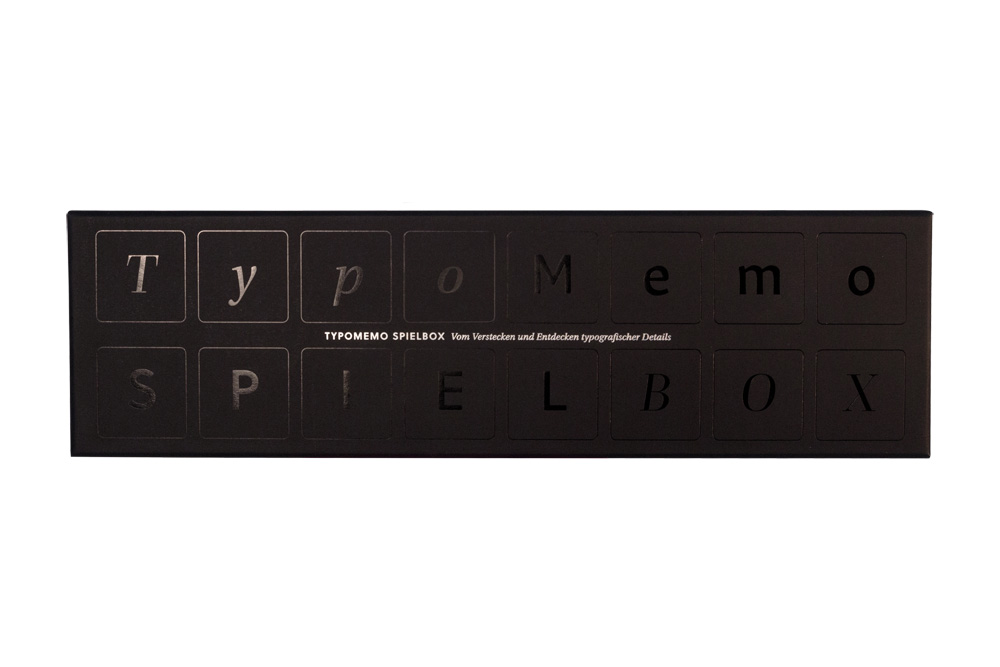 The TypoMemo is a declaration of love for the letters, a mini-setting box in panorama format and the most charming way to sensitize graphic designers for font details. It is a design object for people with good memory and the chance to strengthen the love of letters among elementary school children.

Four expressive alphabets and 24 special characters
128 fine letter plates, silver embossed on deep black, triple laminated Fedrigoni cardboard are waiting for their use and you decide: TypoMemo or Typoesie?

There are no limits to your creativity with four expressive alphabets and 24 special characters.School your typographic eye. Play TypoMemo in different levels from reading learner to typo nerd. Draw children, friends and colleagues under the spell of the letters. Become a typoete and put messages with 16 characters in the noble mini-case-box to the point. Or blow up the CNC-milled cabinet frame and text on agency and dining tables - out of the box. The game ideas for letter lovers are almost unlimited.

The sound makes the music: So that the fine tablets with clear sound can tumble on your table, we have triple-black, solid-colored Fedrigoni cardboard laminated in triplicate. In order to avoid disputes about p or d, q or b, i or l, n or u in the game, fine strokes mark the baseline in possible doubts.

In your TypoMemo Panoramabox you will find 8 punching boards with 16 easy to push out tablets. This way, when you first contact the TypoMemo you already have an overview of characters and special characters. Under the first panel you will discover the game instructions, but your creativity in finding new game ideas is nothing in the way.

A CNC-milled section made of HDF picks up the letters and allows you to deliver messages with 2 x 8 letters: in daily interaction, as a gift or as a panoramic set box for yourself. The 24 special characters prove to be special useful.

The four fonts we have used (QUESTA, SOLEIL, gitan and utopia) have been chosen for aesthetics and distinctness, of two alphabets we use uppercase, of the other two only the Commons. The box itself is deliberately not foil-laminated, it would be a pity for the dull black ...

128 tablets in the format 37 x 37 mm in a noble box in the form of a panorama box. Including 24 special characters.