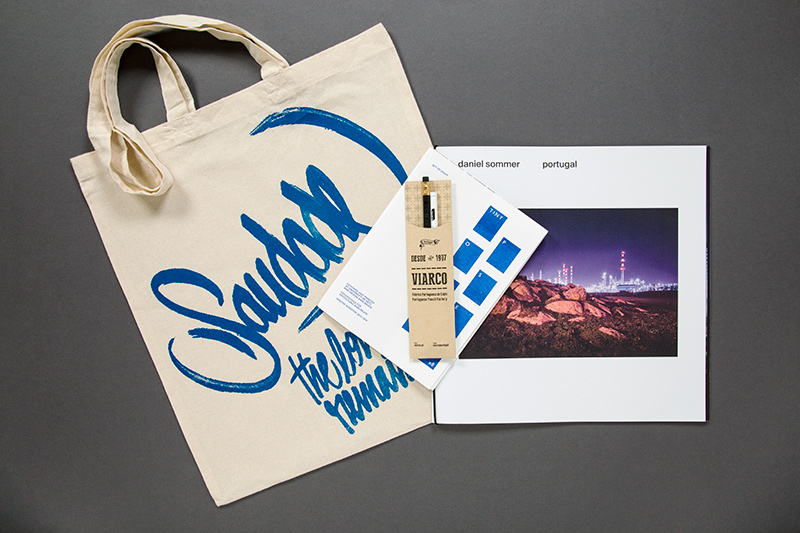 On occasion of the release of Slanted Magazine #27—Portugal, a limited Special Edition has been published which is exclusively available in the Slanted Shop. The edition contains a screen printed tote bag, a photo essay by photographer Daniel Sommer, a set of tiny posters related to Portuguese music (University of Arts and Design Karlsruhe), and custom made pencils by Viarco, the oldest pencil factory of Portugal.

Saudade is a typical word in Portuguese that claims no direct translation in English. In Portuguese, “Tenho saudades tuas” translates as “I have (feel) saudade of you” meaning “I miss you,” but carries a much stronger tone. Saudade was once described as “the love that remains” after someone is gone. Saudade is the recollection of feelings, experiences, places or events that once brought excitement, pleasure, well-being, which now triggers the senses and makes one live again.

Photographer Daniel Sommer has built up his portfolio concentrating on sports and sports personality portraits. In February 2016 he accompanied the Slanted team on their trip to Portugal to capture the mood of Portugal at night. From the rough sea to the unusual appearance of common sights and wild nature – Portugal at night has a mystical aura.

Music and graphics are two different kinds of media, auditory, and visual. But they always come together and one cannot think about the one without thinking about the other. Can we explain music through images only? In the seminar Tiny Posters at the University of Arts and Design Karlsruhe, four students have approached this subject and searched for Portuguese musicians whose work they wanted to approach visually.

For every musician they printed six posters for six of their songs in various techniques such as linocut, or nyloprint. A selection of these posters can be found in this set, which was produced on the university's own printing-press “Black Betty“ in an edition of 200 copies. A visual soundtrack exclusively sampled for Slanted Portugal!

The national poet Luís Vaz de Camões (1524–1580) once said these words, which can be translated to “Times change, wills change.” Change is visible all over the country, and only because of the strong will of the Portuguese, and the boundless will of José Vieira, owner of the oldest pencil factory Portugal’s, places like Viarco are still alive. They manufactured these wonderful pencils for the special edition and with this share their approach and heritage with the Slanted readers worldwide.

Get an insight look into the oldest factory of Portugal online and in Slanted Magazine #27—Portugal, p. 68–71.