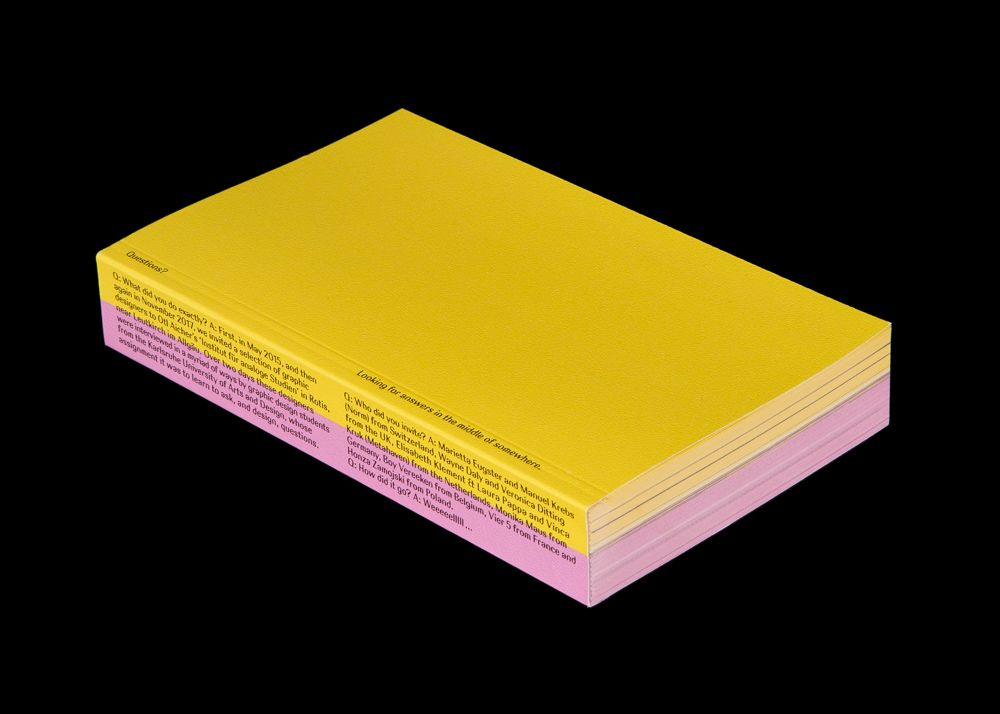 Questions? Looking for answers in the middle of somewhere

This book is about asking and designing Questions. And beyond that, it has just received the Young Book Design Award from 109 submissions. An introduction by Juliane Hohlbaum:

When Prof. Sereina Rothenberger and Prof. David Bennewith invited graphic designers to give lectures at the University of Arts and Design in Karlsruhe, they noticed that there was a certain hesitation amongst students to ask questions. They were convinced that this was not out of a lack of curiosity, but more likely because they felt they might ask the ‘wrong’ questions. So Rothenberger and Bennewith came up with a seminar that was all about asking questions, which is also a valuable skill to have for a graphic designer. In May 2015, they invited Marietta Eugster, Elisabeth Klement and Laura Pappa, Vier5 and Honza Zamojski to an extended interview session at Otl Aicher’s ‘Institut für analoge Studien’ (Institute for analog studies) in Rotis (Germany). The seminar was repeated in November 2017, this time to meet and talk with Wayne Daly, Veronica Ditting, Manuel Krebs (Norm), Vinca Kruk (Metahaven) and Monika Maus.

Over two days, the invited designers were interviewed in a myriad of ways by groups of students, whose ­task it was to learn to conceive, ask, and design questions. Each text in the book was designed by the students who devised and conducted the respective interview. As a second part of the assignment the students had to design a typeface for their text, based on ‘Rotis’, a font released by Otl Aicher in 1989.

A team of students – Friederike Spielmannleitner, Simon Knebl and Béla Meiers – then collected the interviews of both seminars and designed the book. The varied content of the interviews is conspicuously structured into two sections, one for each visit to Rotis. The colours of the book represent the different seasonal atmospheres of the two seminars – a marshmallow in winter-purple and spring-yellow. They are also a homage to the colours the team discovered in Aicher’s work. The two sections are joined by a chapter of illustrative collages that give an atmospheric insight into the two trips to Rotis.

The work produced by students of all age groups is maybe the most contemporary insight you can have in the field of graphic design, since the work reflects their momentary curiosity and interests. It is interesting to question if and to what degree there is already visible differences between the designs made for the 2015 edition and those from 2017.

Friederike Spielmannleitner, Simon Knebl und Béla Meiers have answered a couple of questions on the book:

Why did you decide to publish the results of the seminars?
The invited designers brought a lot of time and interest to the project. This allowed the participating students to develop very free and experimental approaches to the interview format. These sometimes unconventional, but very intensive encounters with the guests, their creative practice and their positions as designers or artists led to highly diverse results. Especially the readiness to experiment, in the way the interviews were conducted, but also later when working on layout and text, makes the material interesting for an audience outside the school context as well. So, the idea of collecting the interview booklets from both seminars in a group publication came up quite early.

What was it like to be both authors and designers in this project? What were the advantages or difficulties?
Mostly, it was exciting for us to have this opportunity to look at the project from different perspectives. Since all three of us had a different relation to the project and the seminars, this double position enabled us to bring our own experiences to the later design process and to include different angles. It was also helpful to be able to relate to the positions of the other participants, to understand their approach and design better and to make this part of the book design as well. For us, there really was no disadvantage, some discussions became even more intense and in the end that led to stronger results.

Can you talk a little about these discussions and the decisions you made on how to deal with the “already existing” material? (The booklets the students made in the seminar)
At the beginning of the project, our discussions about how to incorporate the existing material were completely open. However, we quickly realized that the combination of so many authors and designers and the resulting mix of content and design positions was very valuable. On the one hand it shows how different designers work and on the other hand it is a very contemporary insight into the field of graphic design. Therefore, it was important for us not to change the design of the individual interviews, but to structure them in a way that makes it easier for readers to find their way around.

How did you decide what “extra” material to add?
Part of our work was certainly to bring all the material into one one – one object. This notion and the idea of restructuring already existing content also influenced our discussions and decisions regarding “extra” material. For example, we decided to draw our own font – based on a design by Otl Aicher – for cover, table of contents and foreword in order to frame the whole thing. We also designed a kind of stamp, which contains all important details of the interviews and separates them from each other. The book is divided into two parts, 2015 and 2017; those are complemented by a chapter of illustrative collages that give an atmospheric insight into the two trips to Rotis.

“Questions? – Looking for answers in the middle of somewhere” is now available at Spector Books. We raffle three copies of the book among our readers. To participate in the raffle, write an email with the subject “Questions?” and your postal address (for shipping) til July 1st, 2019, 11 a.m. (UTC+1) to [email protected]. The winner will be drawn after the deadline and contacted by email. Whoever takes part in the raffle agrees to receive news from Slanted and accepts the data protection regulations. The legal recourse is excluded. We wish you good luck!

Questions?
Looking for answers in the middle of somewhere. 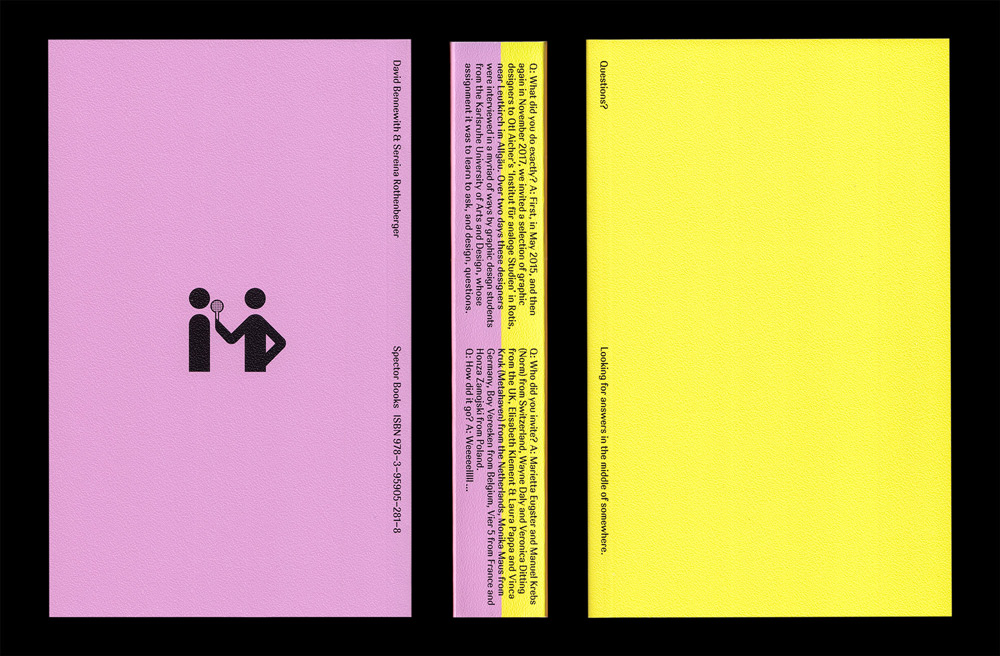 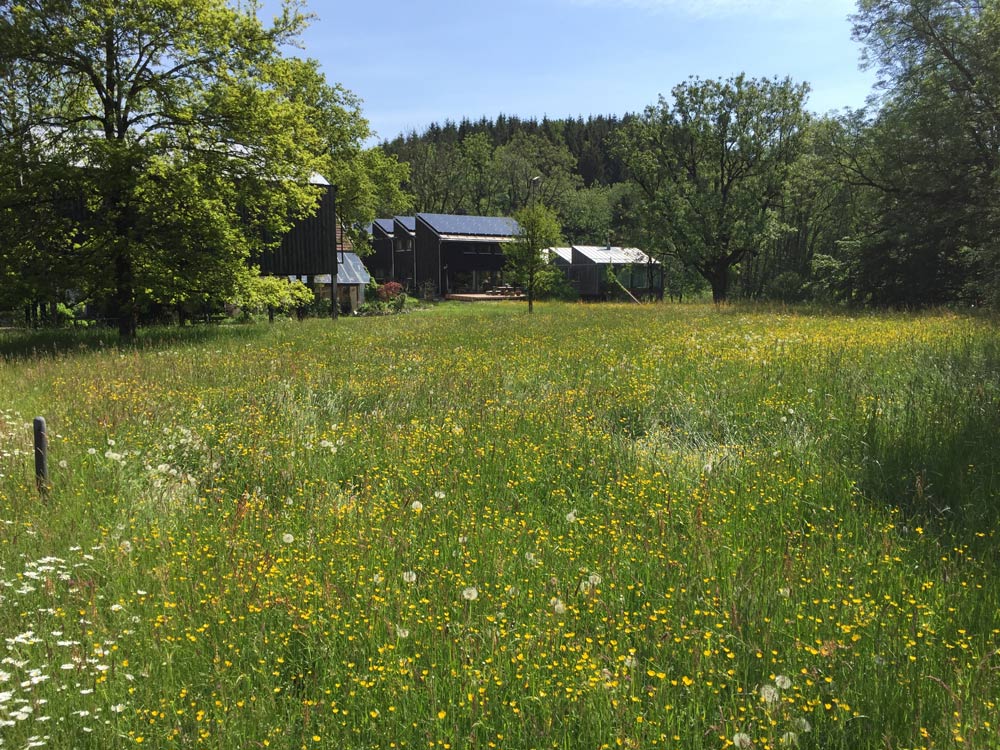 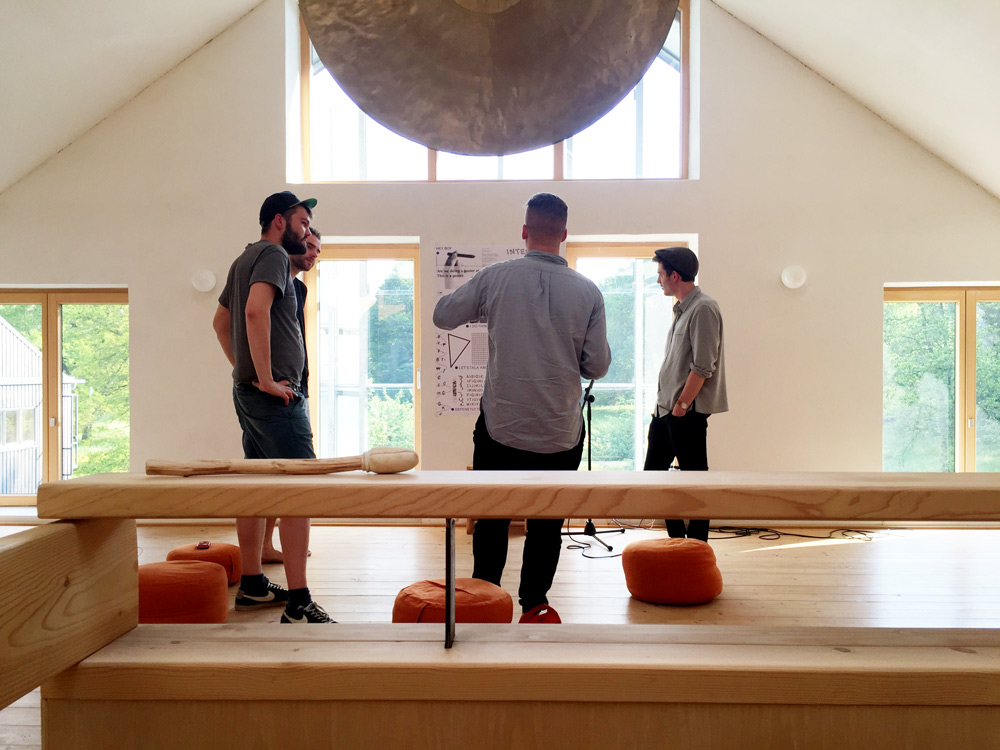 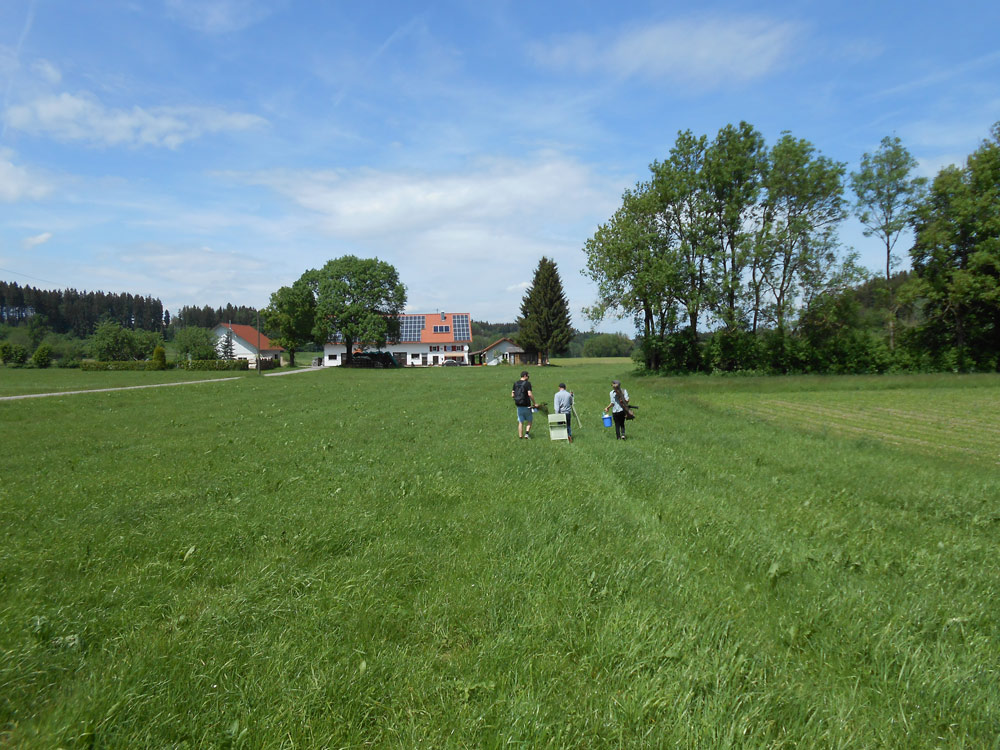 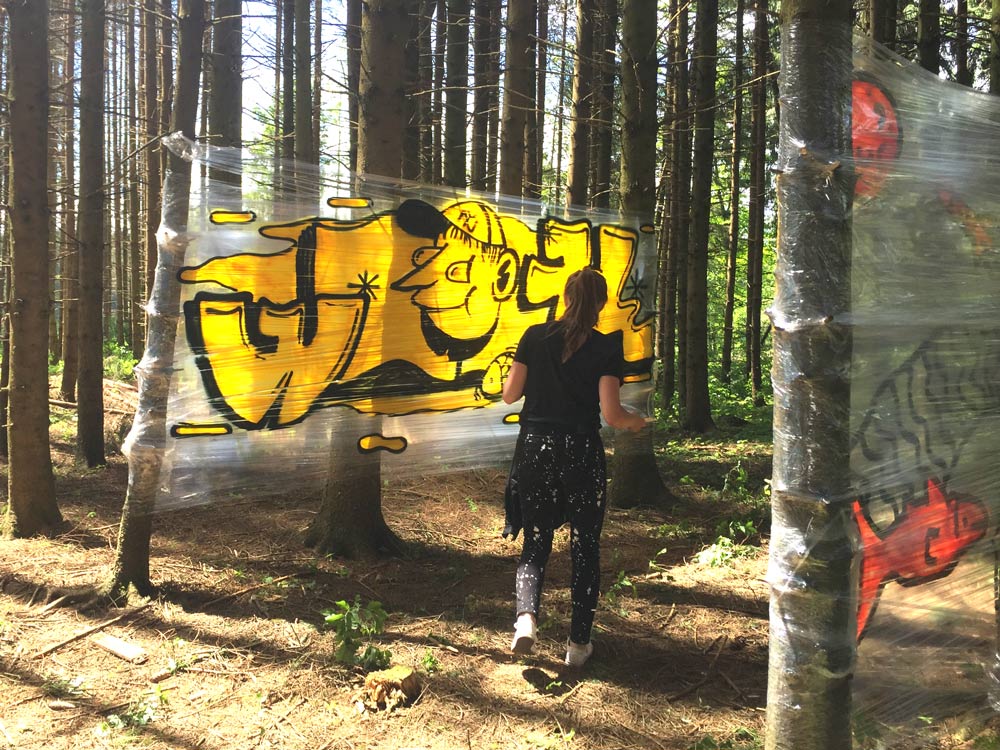 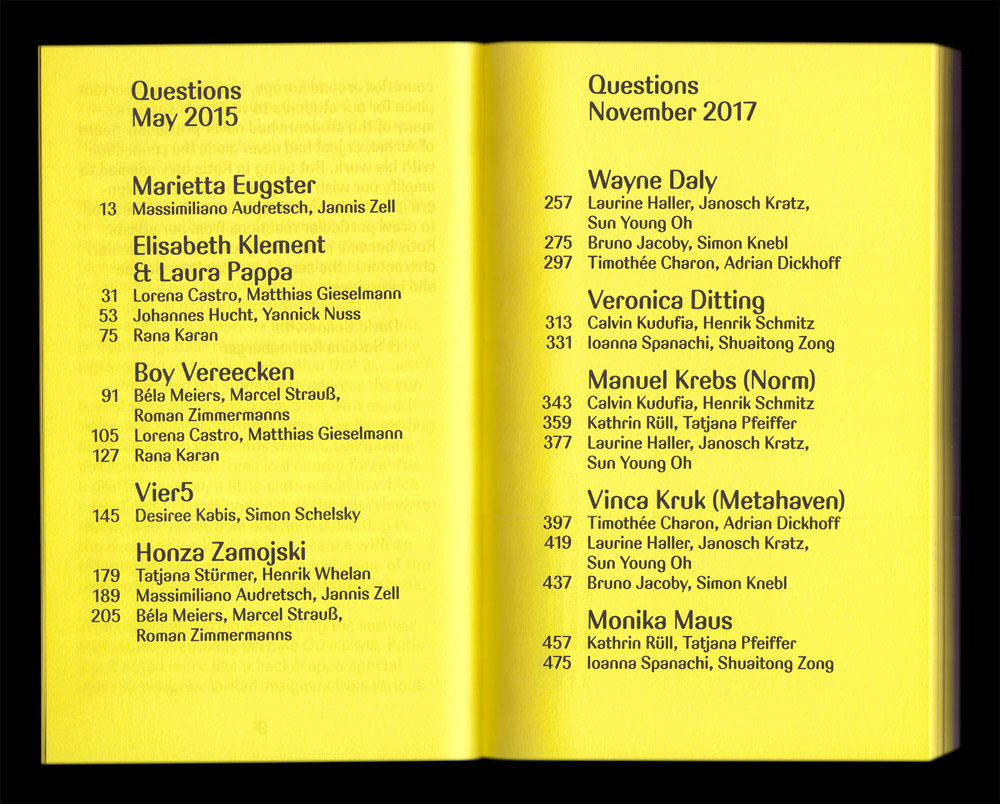 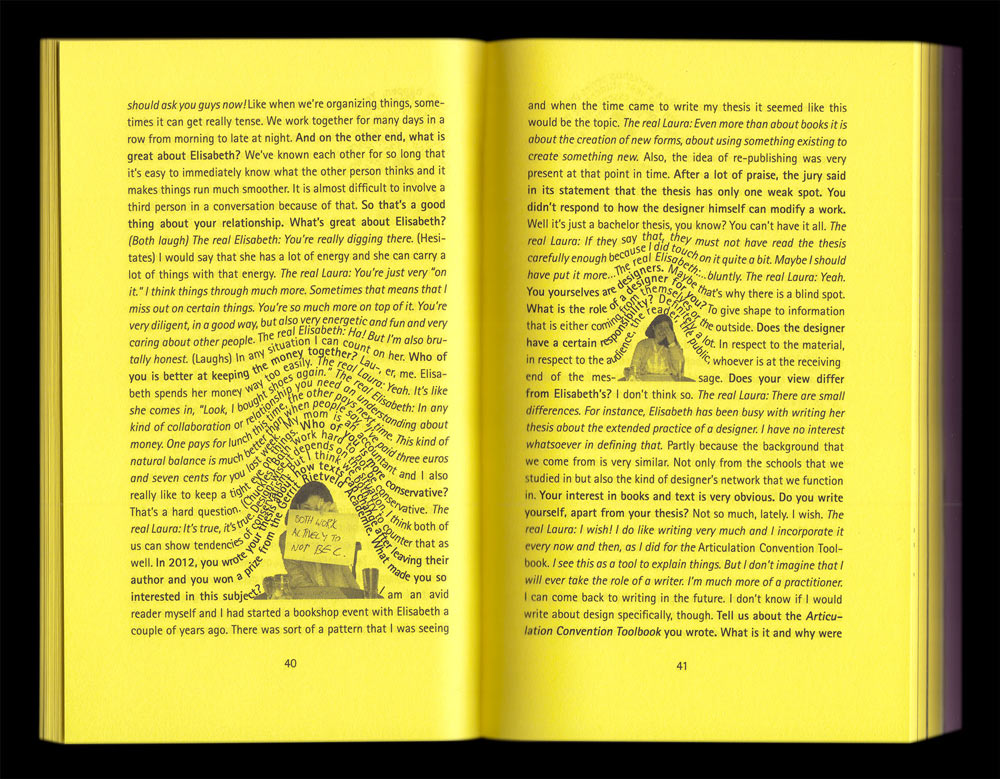 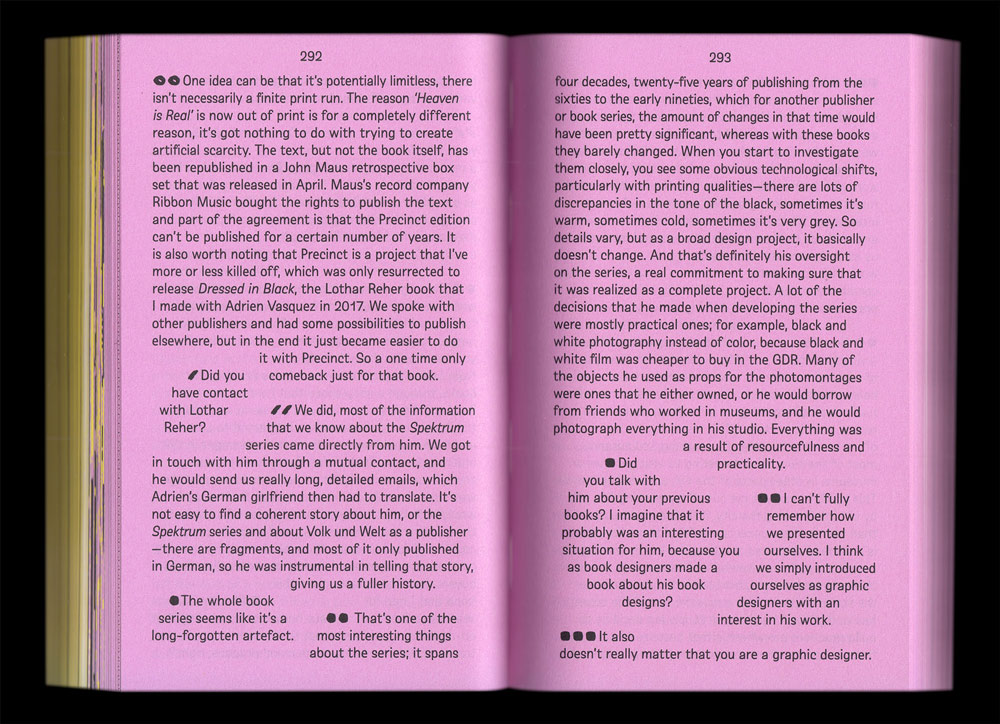 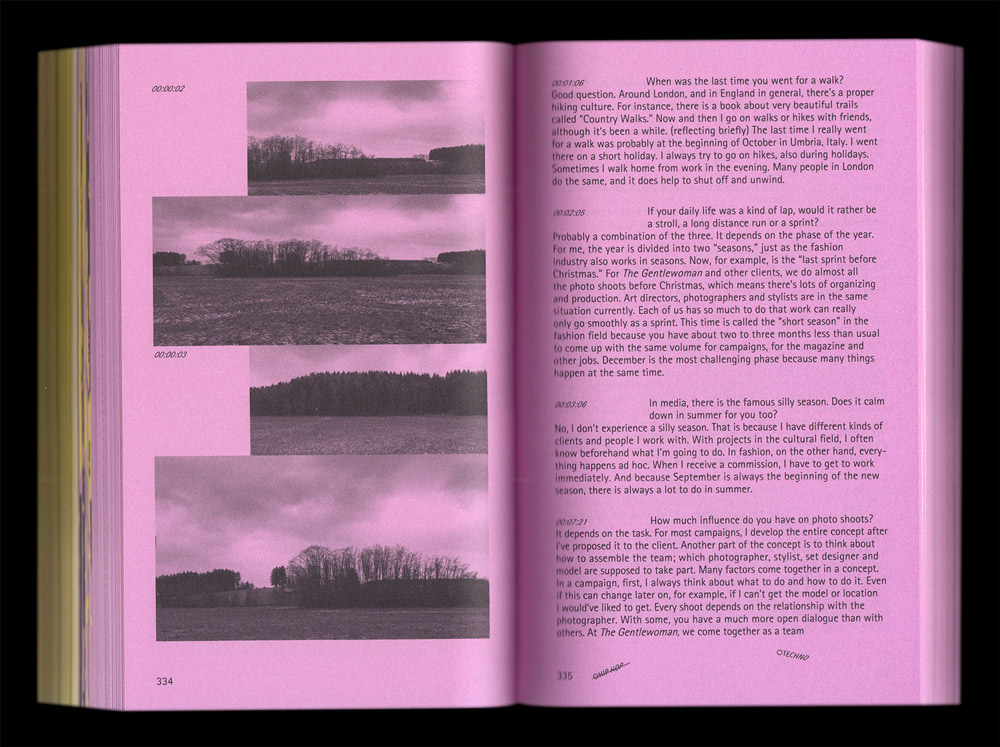 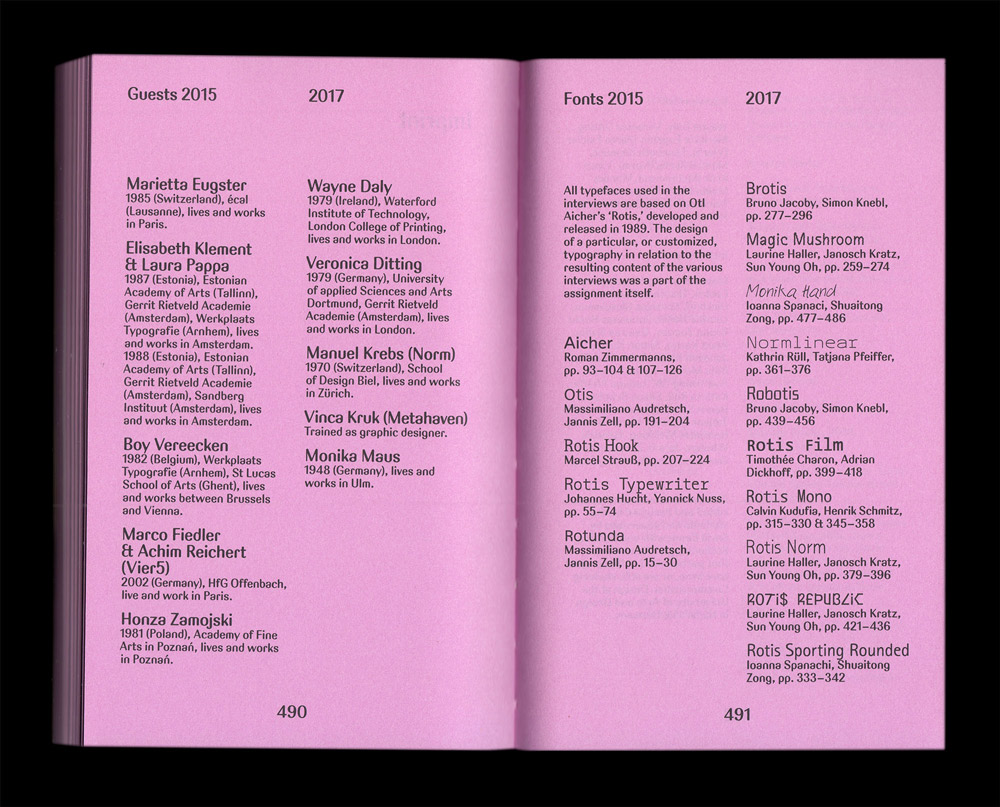